Further analysis however shows that the difference between the two houses only resides in a few top lots and that despite not having these few top headlines' lots, Christie's performance was strong given the current market.

Christie's offering was light in top expensive lots and heavy in lower priced artworks.  With only 1 artwork estimated at or above £4m and almost 30 artworks with Low Estimates (LE) below £500K, Christie's auction counted 55 artworks.  This was much more than the year before when the auction house catalogued 42 artworks, including only 18 artworks with LE below £500K. This was also significantly more than Sotheby's offering this year, which only counted 46 lots. 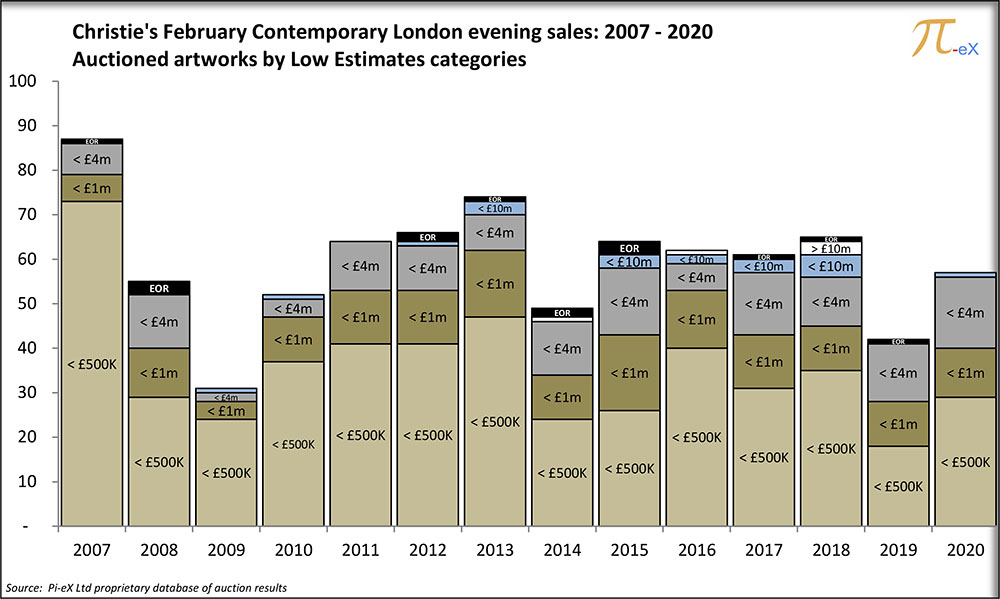 Whether by choice or not, Christie's did not use Third Party guarantees as extensively as the year before.  While the number of artworks covered by Irrevocable Bids (IRB) was almost the same, the value of artworks covered by the IRB was much smaller.  In the end, only 37% (£17m out of £46m) of the Total Hammer Price obtained by lots auctioned at Christie's came from Irrevocable bids versus 63% (£50m out of £79m) at Sotheby's and 67% (£11m out of £17m) at Phillips. 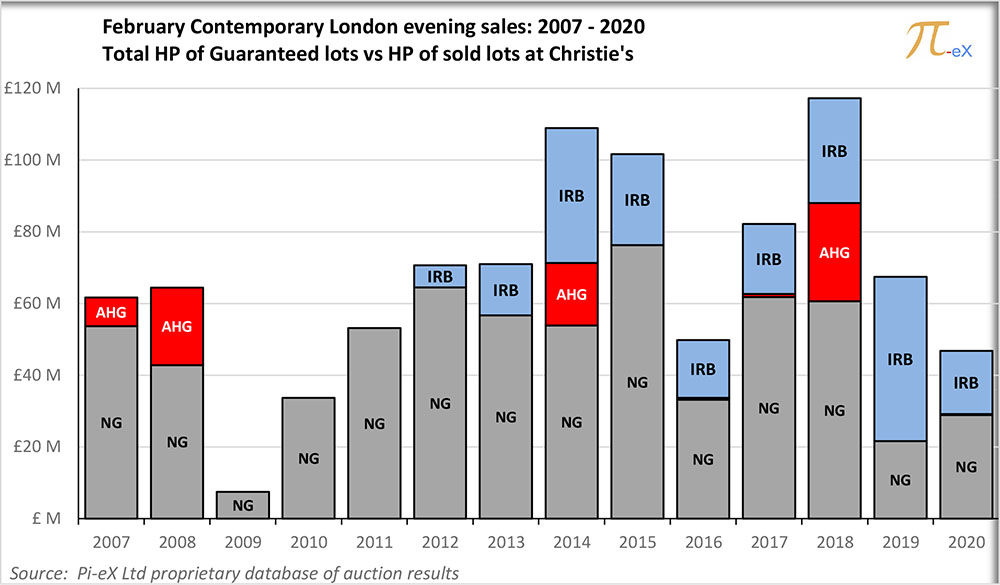 The graph below showing the total Hammer Price obtained at the sale over the past 14 years highlights the particularities of this year, especially showing that Christie's did not have a "big lot" contributing to a large part of the total revenue in 2020. This is in contrast to the £33m HP obtained by David Hockney's artwork "Henry Geldzahler and Christopher Scott" in 2019 (this lot had an IRB) or the £22m HP obtained by Andy Warhol's "Six Self Portraits" in 2018 (this lot also had an IRB) or the £11.2m HP  brought by Peter Doig's artwork "Cobourg 3 + 1 More" in 2017, etc...

This year the top Hammer Price obtained at the Christie's sale was £4.2m for "Muhammad Ali" by Andy Warhol, a work from the Collection of Richard L. Weisman, which did not have an IRB.  While Warhol represents a large share of the total Hammer Price this year, this is not the result of one top lot, but rather the sum of the sales of 13 Andy Warhol artworks.  It should be noted, that only one artwork among the 13 works by Andy Warhol was covered by an IRB. This was lot 24, an artwork entitled "Knives" which obtained a Hammer Price of £2.3m (below its LE of £2.5m) and was taken home by the Third Party guarantor. 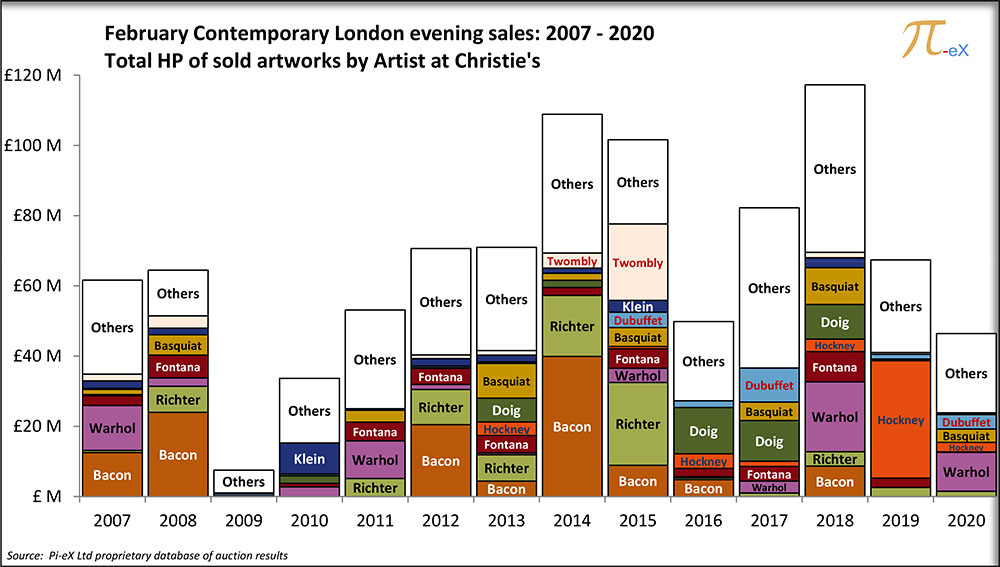 Lots without guarantees at Christie's (the focus of the graph above), counting for 80% of lots auctioned this year,  performed better than the year before as the total Hammer Price for these lots ended up in between their respective total Low and High Estimates. 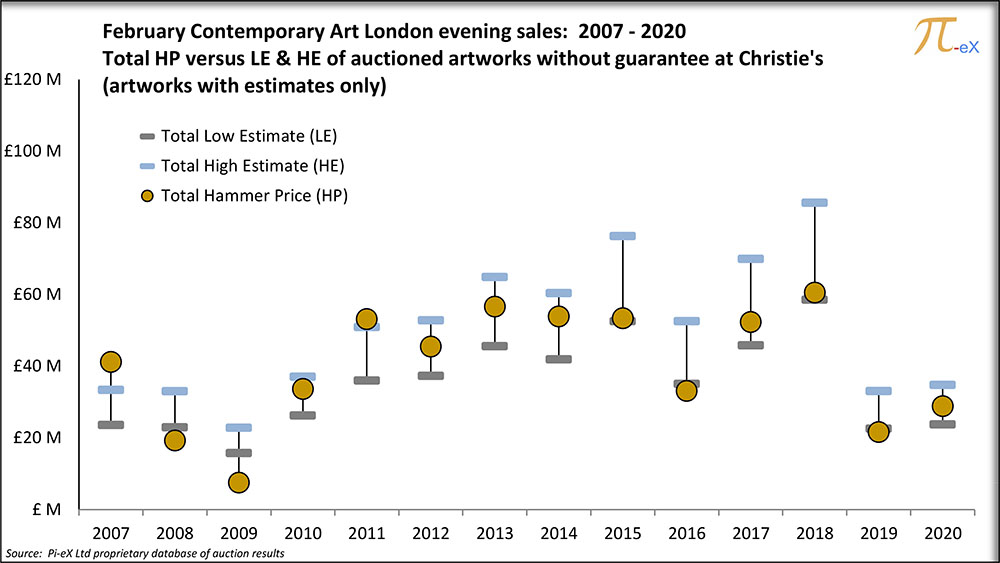 Was Christie's unable to secure Irrevocable Bids or is it leading the way to a new reality without guarantees?  Over the past few years, Irrevocable Bids have allowed the auction houses to claim the sale of top lots at ever more expensive prices. But are these prices fair market value when they are pre-negotiated and agreed by two parties only ahead of the auction? and most importantly are these prices sustainable?  The next few months will probably help us answer these questions.