October 2020 saw Christie’s and Sotheby’s “Part 1” of the New York Impressionist and Contemporary Marquee Evening sales. Christie’s opened New York fall season with its 20th Century sale on October 6th, 2020, while Sotheby’s closed the month on October, 28th 2020 live-streaming both its Contemporary and Impressionist evening sales in one evening. The two auction houses aligned in shifting the traditional auction calendar and tried to create momentum despite challenging market conditions, adding a dinosaur and collection cars among the artworks.

Despite major consignments coming from museums, the art offered for sale did not manage to thrill prospect collectors and the October 2020 sales will be remembered for their modest performance. It is therefore little surprising that both auctions houses added another round of New York evening sales in December

With “Part 2” of the Evening sales around the corner, Pi-eX analysis looks back at the drivers behind the weak performances of the October sales. Did Sotheby’s and Christie’s face the same challenges? How did the coronavirus pandemic and the upcoming US election affect the level of confidence of sellers and buyers and eventually the Fine art market?

1. Sellers were hesitant to sell, and buyers were - for the most part - conservative 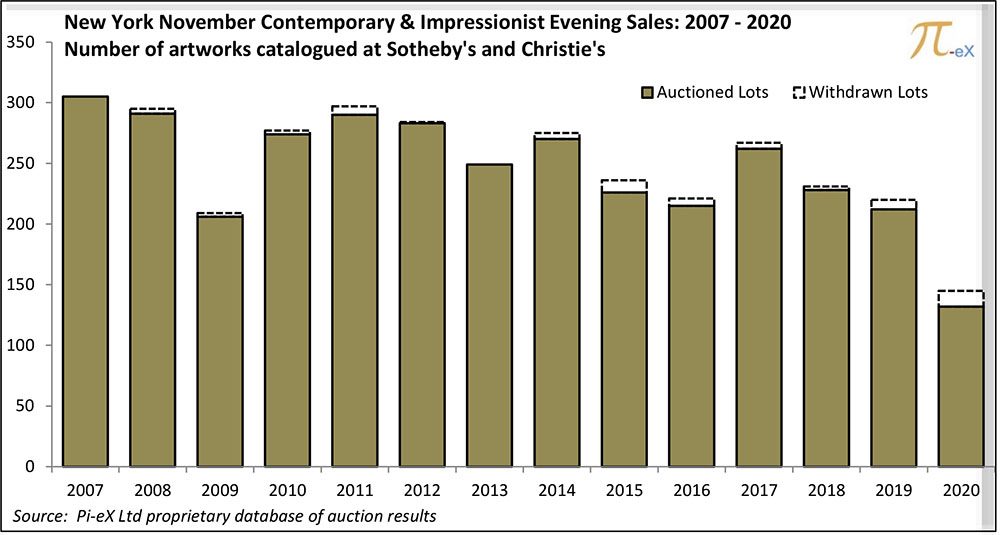 As observed in 2009, sellers of major artworks tend to avoid consigning at auctions when they feel there is not enough confidence in the market. This resulted in an almost 30% drop in the number of artworks consigned at the New York November Marquee evening sales in 2009 and almost 40% drop in 2020, bringing the 2020 level of consignment to its lowest level since 2009. 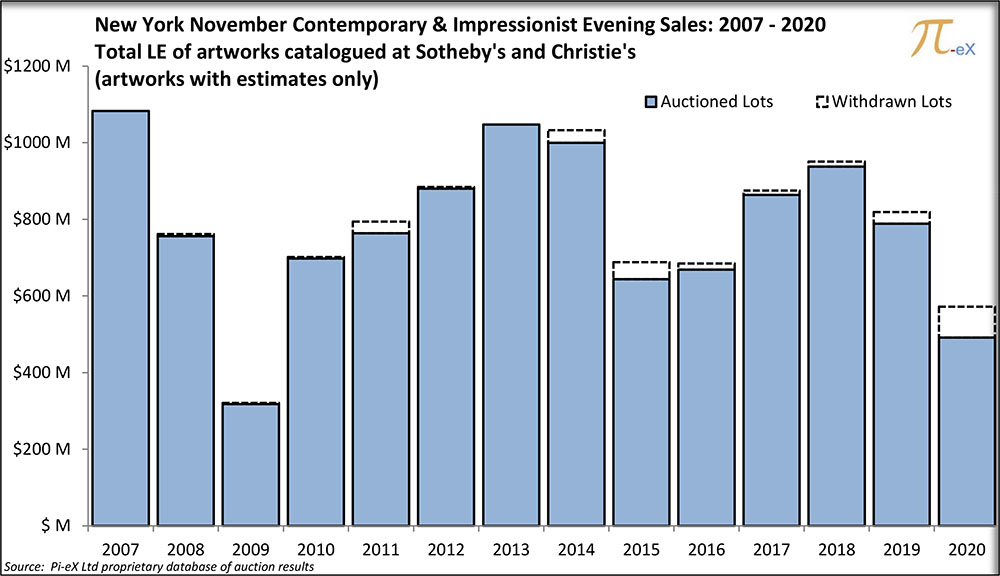 2. Despite an initial volume advantage, Sotheby’s suffered from last minute difficulties, which in the end led to Christie’s value advantage

Looking deeper into the performance at auction level, it emerges that Christie’s and Sotheby’s suffered the contraction in different fashions.

While Christie’s lower level of catalogued artworks seemed to indicate that the auction house struggled to find sellers for its “Part 1” sale, Sotheby’s faced an unexpected last-minute withdrawal of top-end lots from the Baltimore museum. After facing sharp criticism from the press, the public, donors and even some of its own trustees, who threatened to cancel a future $50M donation if the artworks were not removed, the museum decided to withdraw 5 artworks with a total Low Estimate of $65M. For Sotheby’s this was the largest ever value of artworks withdraw ahead of its November Evening sales in the past 14 years. 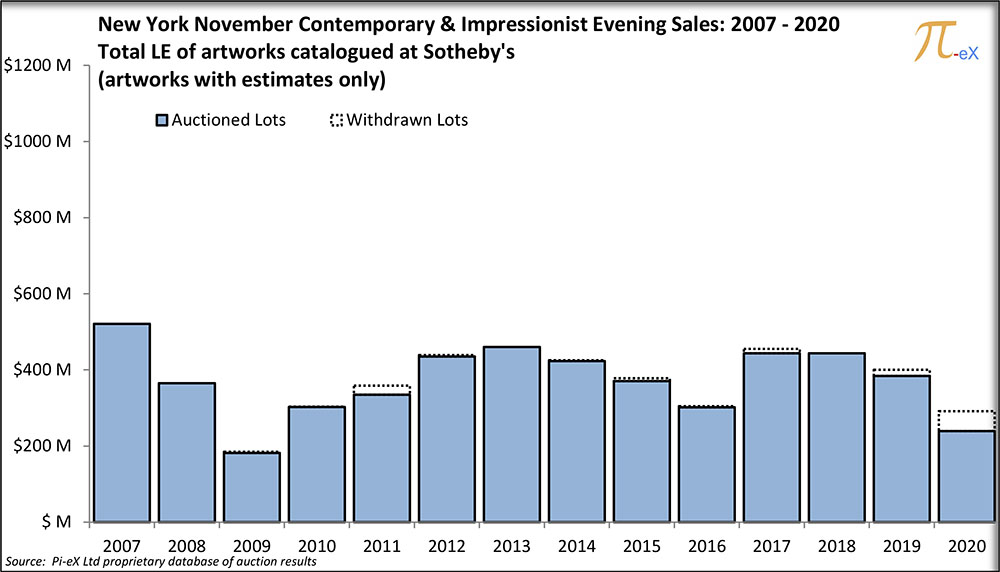 Christie’s did not face such a last minute bad news at its October 6th 20th Century evening sale, but it did start with a much smaller set of consigned artworks. In fact only 50 artworks were offered in 2020 versus 150 a year before. 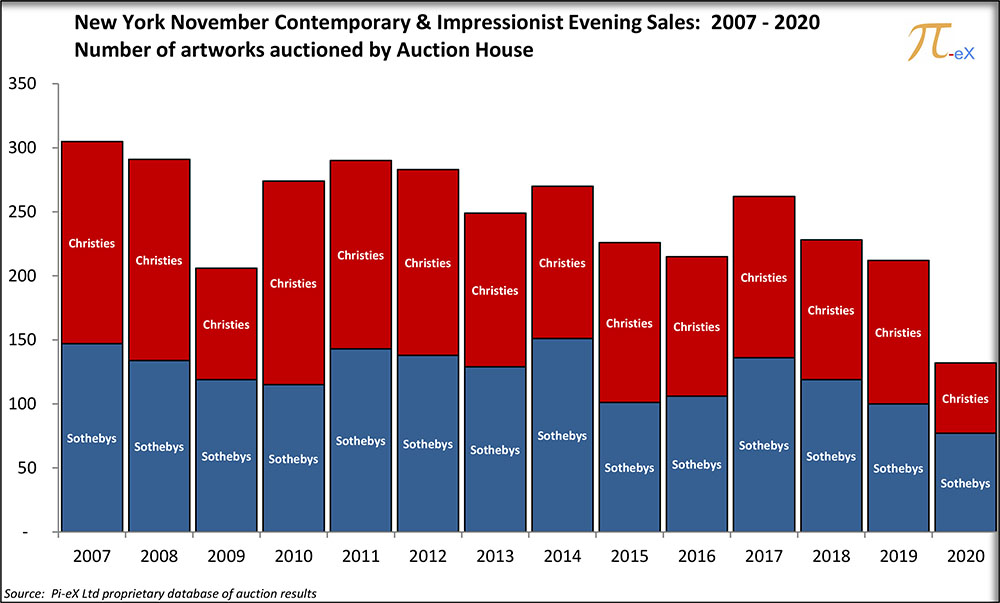 But volume is not always a predictor of success in the auction business and indeed Christie’s, with its smaller offering, managed to generate in its one sale more revenue then Sotheby’s with both its Contemporary and Impressionist evening sales: respectively $341m vs $284m, buyers’ premiums included. 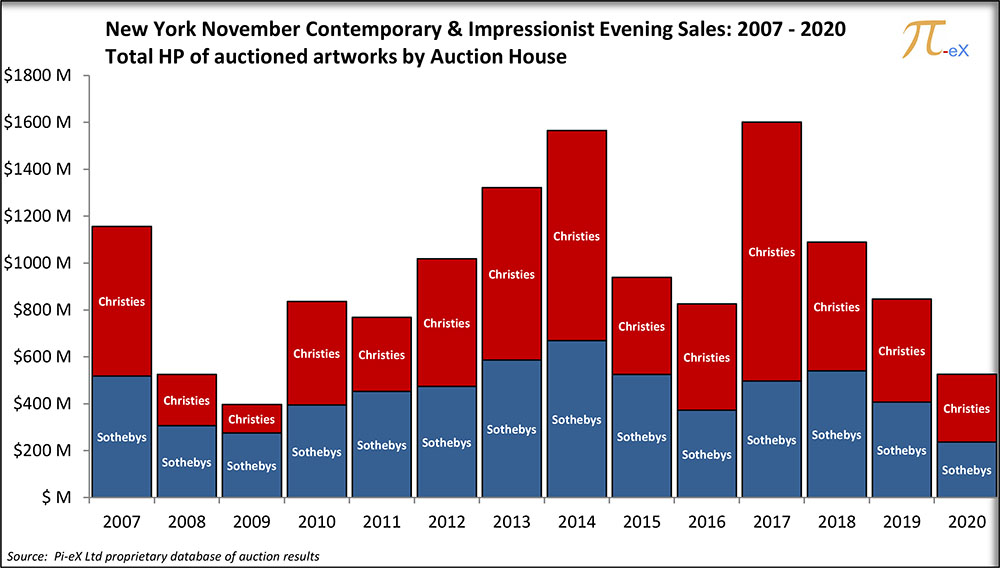 3. Behind a resilient front picture, signs of a top market being shaken are showing 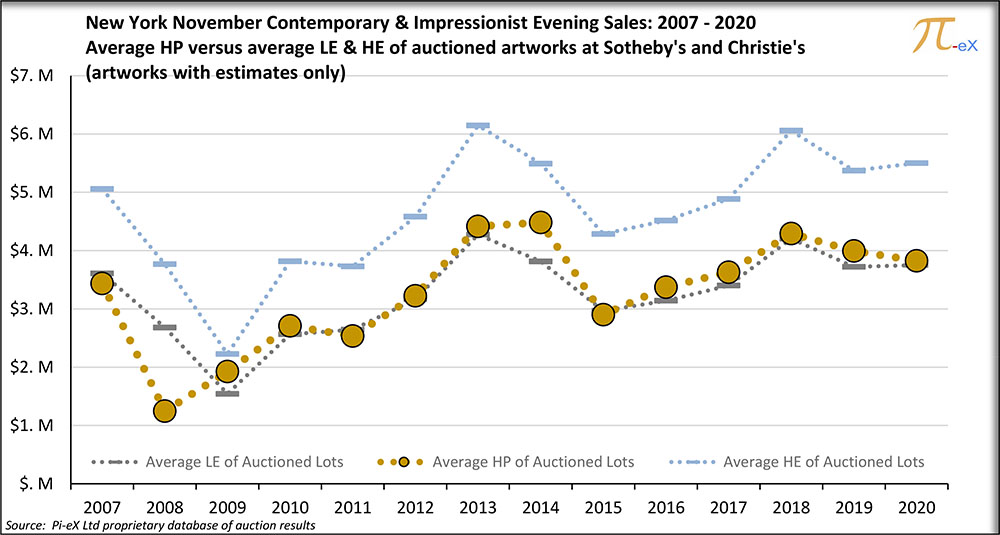 At first sight, the graph of the combined average Low and High estimates, and Hammer prices of artworks sold at both Sotheby’s and Christie’s New York Fall Evening Sales seems to point to a resilient market. The estimates are very much aligned with last year's and the average Hammer Price nicely falls at the level of the Low Estimates. 2020 is far from the nightmare of 2008 when the average Hammer Price ended up far below the estimates or 2009 when the average estimates dropped to a never seen before level. 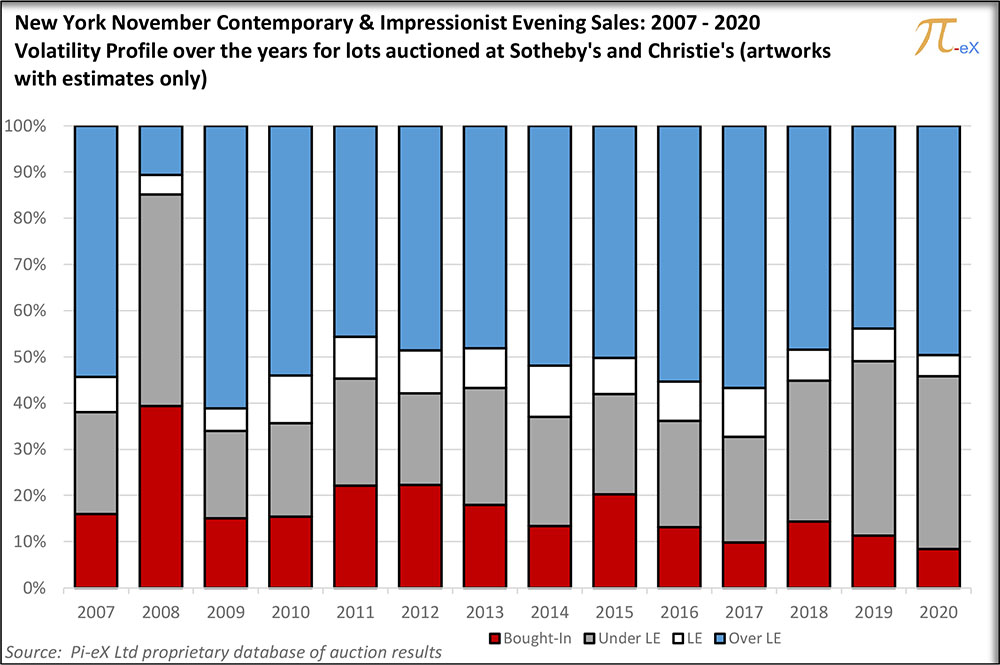 The picture of resilience in 2020 is also reinforced by the fact that Sotheby’s Impressionist Evening sale was a White Glove sale, ie a sale in which every single artwork auctioned found a buyer, a rare and noticeable event. If the Bought-in rate (the number of artworks being unsold over the number of artworks auctioned) was to be the criteria of success, these sales were clearly very successful as the bought-in rate was the lowest in the past 14 years and definitely not the 40% observed in 2008.

But other signs point to a visibly weak market. In addition to the lower level of consignment highlighted earlier, the volatility profile of the sale shows the restraint of both sellers and buyers. 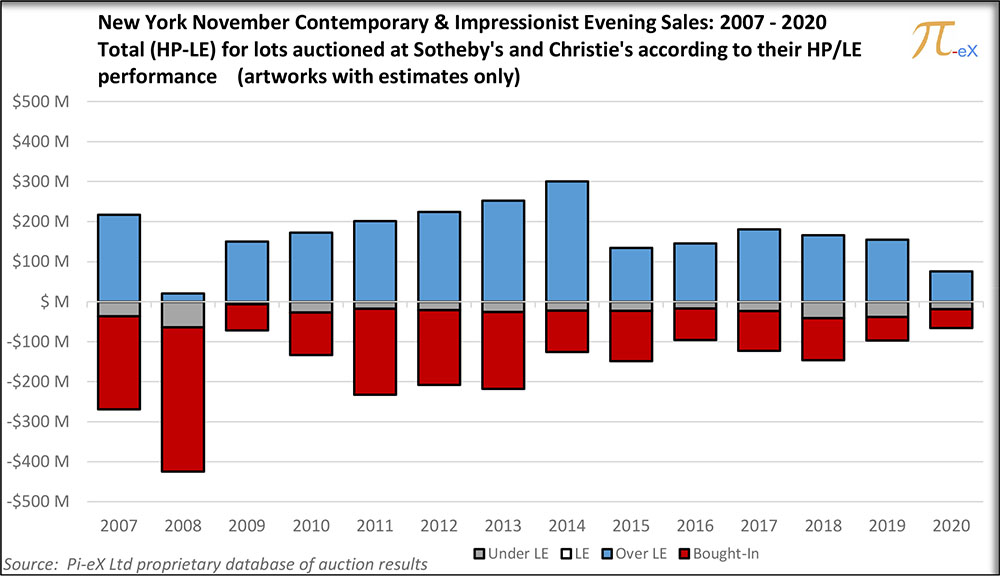 While the 2020 volatility profile surely does not resemble the 2008 profile, it shows a never seen before level of contraction, similar to what was observed in 2009 and in 2015, two years remembered for unsettling times in the art market.

The smaller upside in 2020 translates the lack of enthusiasm of buyers as there was very little overbidding for artworks. On the other hand, the small downside shows how the bought-ins have been restrained in value.

Two factors most likely contributed to this:

First, sellers and auction houses’ cautiousness: as less lots were offered, the chance of at least two buyers bidding on a same lot increased and therefore the risk of a potential bought-in decreased.

Second, the high level of Irrevocable bids, ahead of the start of the auctions, guaranteed that few lots - especially at the top end - would remain unsold. 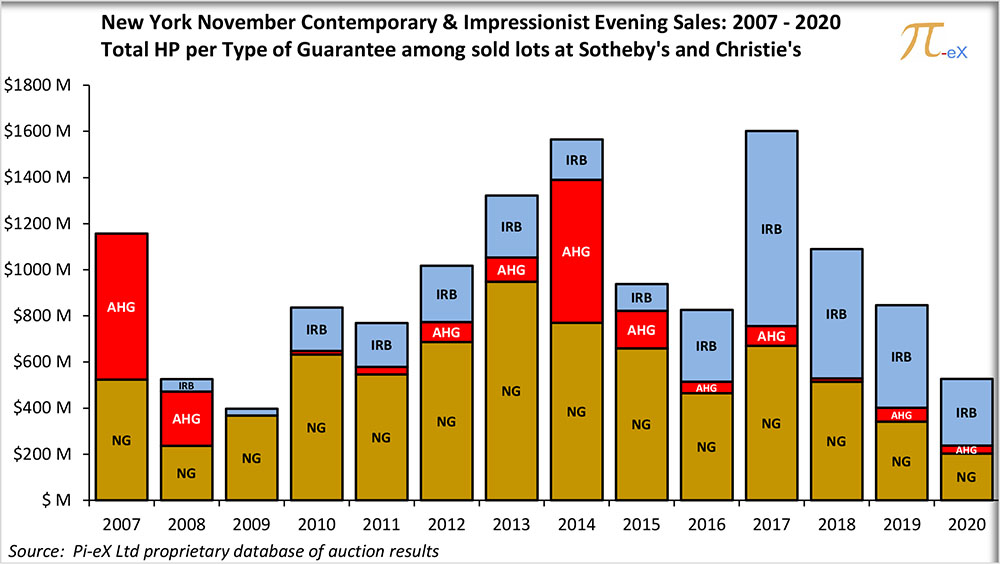 In the October 2020 evening sales, almost 55% of the total Hammer Price obtained at the combined sales was from artworks pre-sold before the beginning of the sales via Irrevocable bids.

“Part 1” of the New York Fall Impressionist and Contemporary evening sales at Sotheby’s and Christie’s achieved mitigated results but the auction houses went through their respective first part of the Marquee evening sales with no major hit despite the auctions being scheduled in the middle of the second wave of a pandemic and just weeks or days before a nerve racking US election.

“Part 2” of the Marquee evening sales in early December will either confirm or infirm the trends observed in “Part 1”. As more clarity will come hopefully on the political, economical and health front, will the enthusiasm of art buyers resume or will it take time for the auction market to be back to its pre-confinement level?

Time and Pi-eX incoming second blog on the Fall evening sales will help in answering these and a few more questions.

Anna Benoliel and Matteo Pace contributed to this report