This fall, Christie's and Sotheby's hammered their Paris Art Moderne October evening sales, both opting for a livestream paired with London Contemporary Frieze auctions. The series of auctions started on October, 22nd 2020 with Sotheby's Modernites evening sale, and closed on October, 23rd 2020 with Christie's Avant-Garde evening sale.  Using their well-advertised hybrid set-up, the auction houses created the opportunity to raise the Paris evening auctions' profile to an international level, reaching an even wider audience.

However great the hopes were for the sales, the outcome was disappointing with an overall lack of active bidding.  Looking back a few years, we highlight the role that third party guarantees may have played in the growth of the sale and what role they played - or did not play - this year.

1. After a peak in 2019, overall results for the 2020 Paris October Modern Art evening sales were disappointing but more aligned with historical sales over the past few years:

The Paris Art Moderne evening sales at both Christie's and Sotheby's have been growing since their inception in 2016, boosted by great peaks in 2017 and 2019. 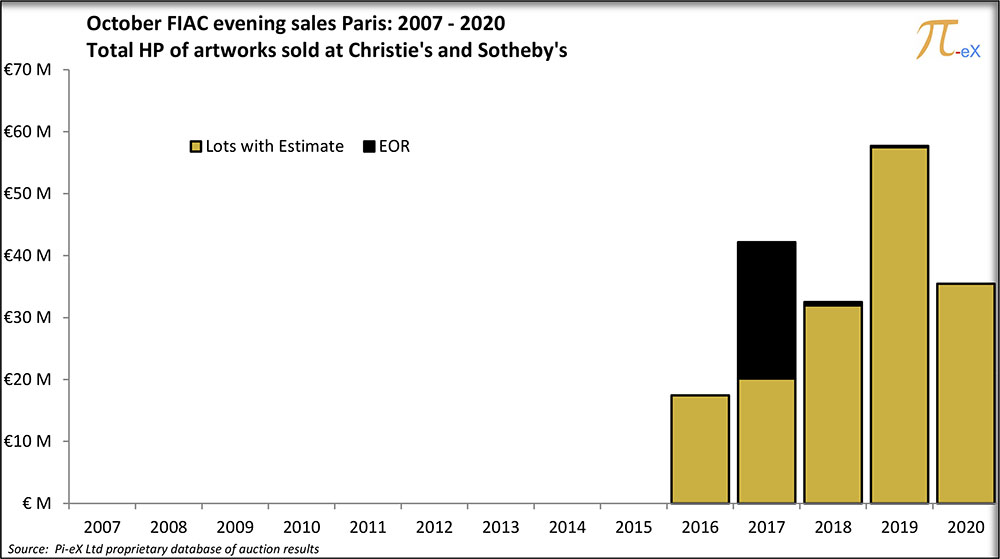 Both years however, the impressive successes can be linked to one single very valuable lot: 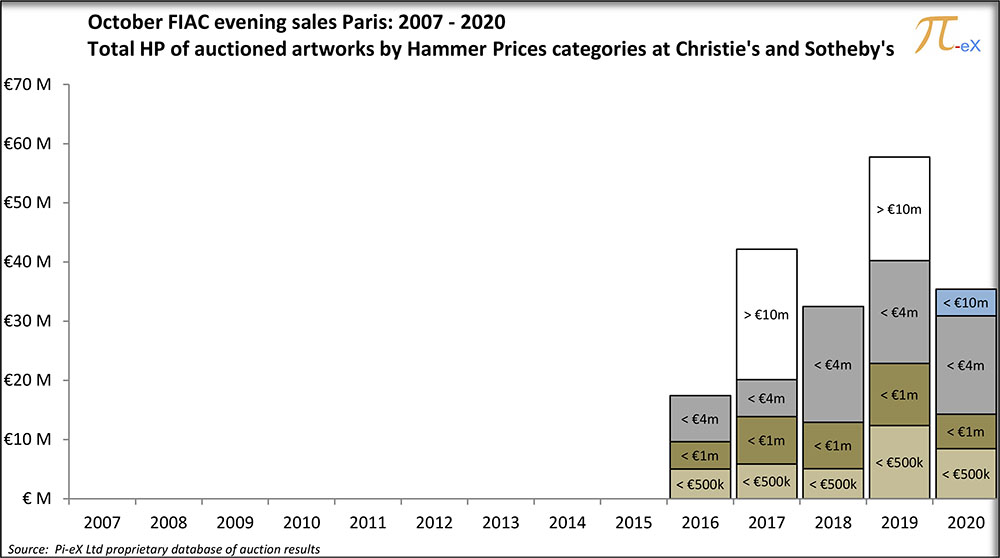 In 2020, there were no such lots at neither auction houses and this showed as the total estimates and Hammer Prices (HP) achieved were significantly lower than in 2019.

As for the rest of the lots, despite some adjustments to the current market conditions - lower volume offering - the sale still underperformed as buyers bid mostly close to the Low Estimates (LE): 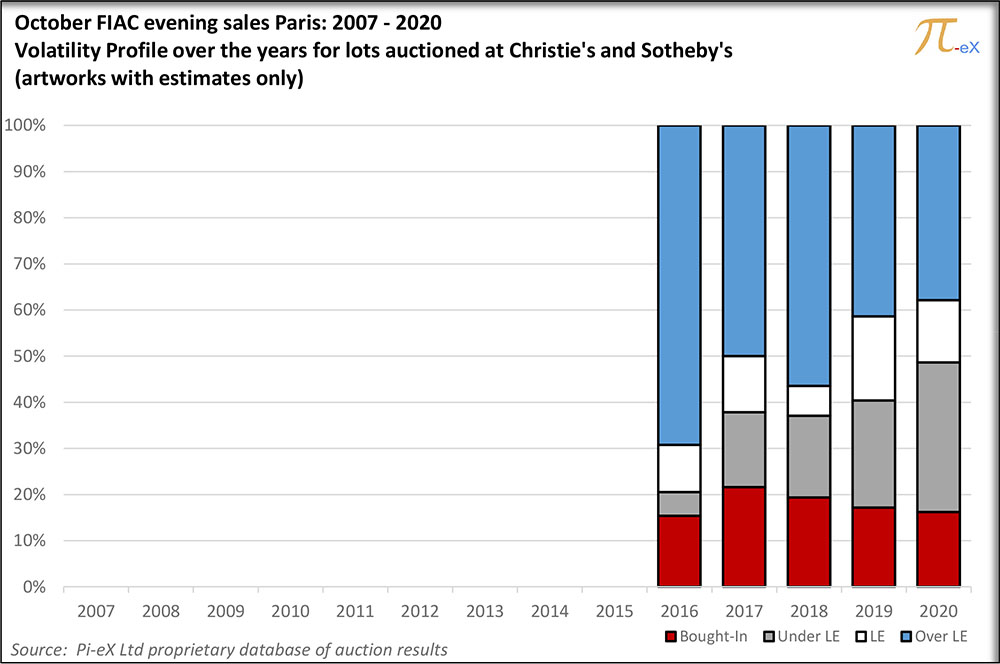 The graph above shows that the portion of artworks sold at and above the LE has been shrinking over the years and so did the unsold lots.  Only the percentage of lots sold below the LE increases over the years, indicating that more and more sellers agree to sell their art below the initial LE, while buyers, on the contrary, are less likely to engage in bidding battles.  This year was no exception as the trend worsened.

2. In parallel to changing market conditions, 2020 suffered from a lower-level coverage by Third Party Guarantors:

Surely sellers and/or auction houses might have feared that a 20 million euros lot as auction highlight would not be successful this year in Paris.  But looking back at the 2017 and 2019 historical heights shows that whatever doubt there may have been - these were removed via the backing of the sale with Third Party guarantees/Irrevocable Bids. 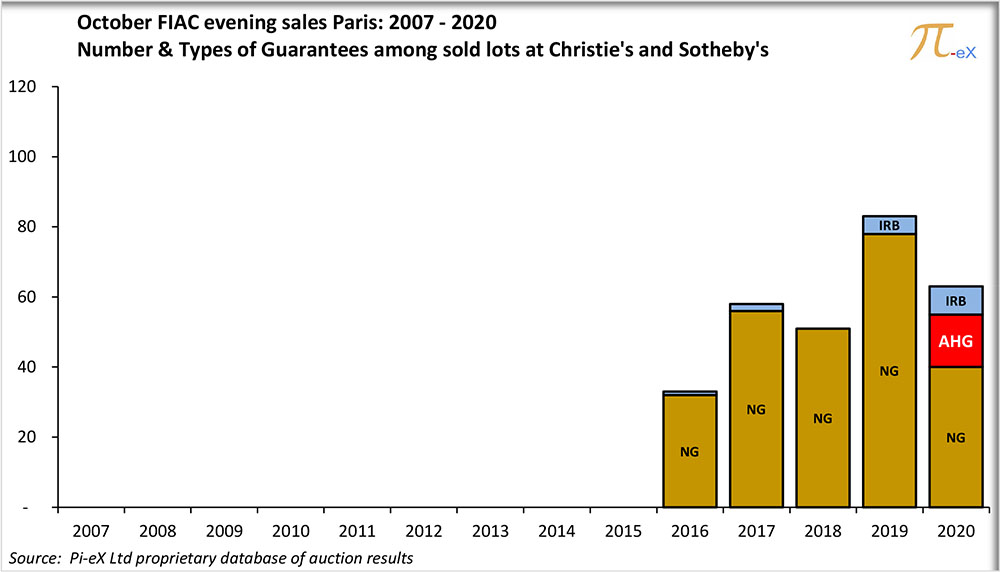 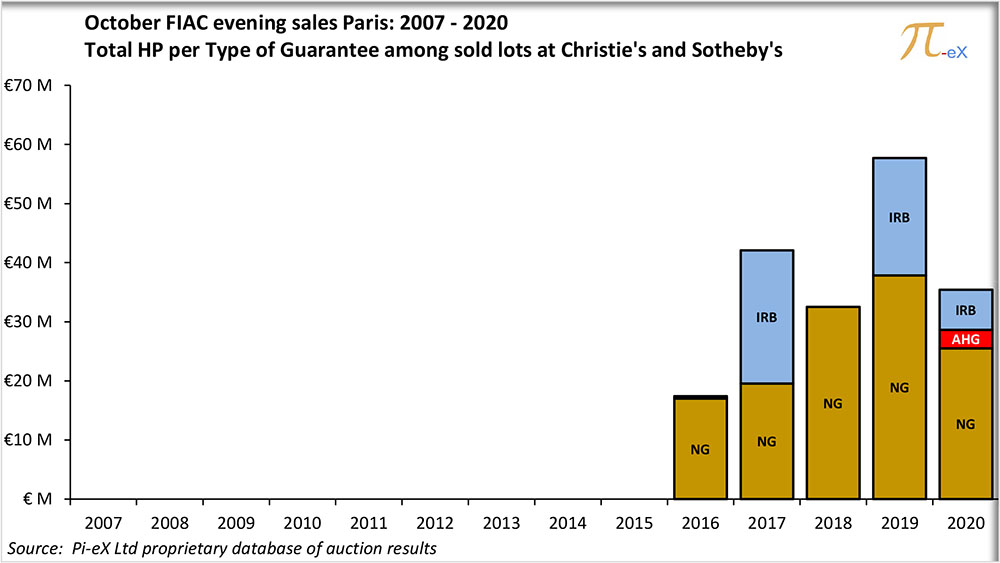 The two above graphs show that very few lots backed by Irrevocable Bids accounted for the peaks observed in 2017 and 2019.  In other words, the auction houses pre-sold the two high profile lots listed earlier ahead of the sales in 2017 and 2019.

This year, while the number of Irrevocable Bids was much higher and the largest ever, the total value of the art covered by Irrevocable Bids,  5 million euros, was much lower. It seemed as if guarantors were shying away from high level exposure.

3. Less involvement from Third Party Guarantors could actually be good news for sellers as buyers this year were visibly more willing to bid on artworks without guarantees:

Looking at the performance split by guarantee status, Pi-eX analysis shows that buyers were more willing to bid on lots without guarantees, as 45% of non guarantees works sold for HP above their LE, an increase from 2019 as seen in the graph below: 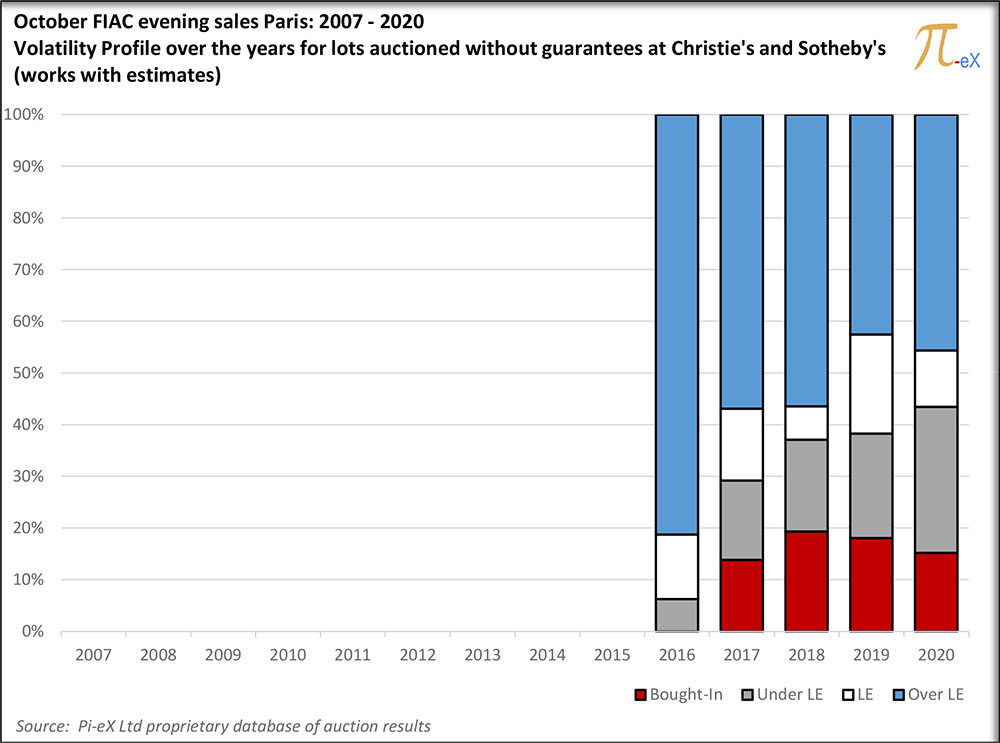 In comparison, only 25% of lots with Irrevocable Bids were hammered with an upside while more than 60% were sold for HP below their LE: 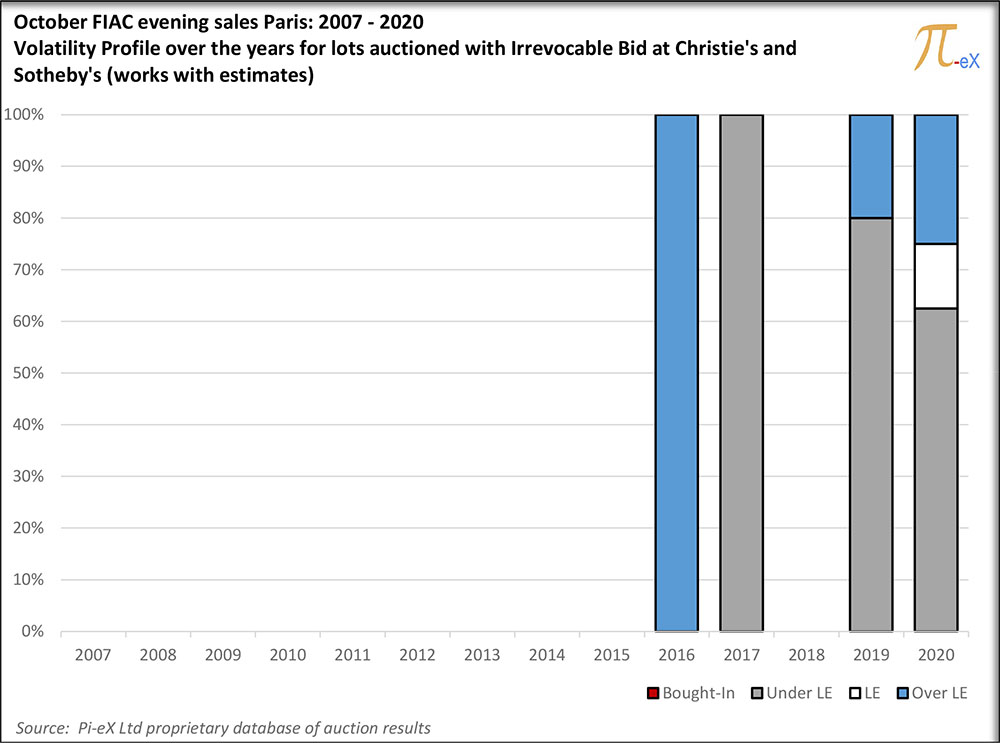 Irrevocable Bids combined with an auction house's guarantee offer sellers the early assurance that their artwork will sell, taking away collectors' worse fear and downside risk when selling at public auctions.  This however seems to be coming at a price.  As seen in the Paris Art Moderne October 2020 sale, a guarantee via an Irrevocable Bid has to be traded with a potential lower upside.

The history and current trends of the Paris October Modern Art evening sales cannot be fully understood without highlighting the role that Irrevocable Bids have played.  In 2020, changing market conditions and lower coverage offered by Third Parties contributed to a seemingly disappointing performance.  This year, no star lot was aligned to boost the total sales.  However the lack of interest from guarantors might have been for the best: the reasonable performance of non-guarantees lots could be an important sign pushing the sales back on track for future growth potential.

Anna Benoliel contributed to this report.

Photo by Nil Castellvi on Unsplash