The New York Contemporary March sales have historically represented the gateway to the Marquee Contemporary Day and Evening sales. For this reason, the so called mid-season contemporary auctions are always a great testing ground and results often signal how much “Art Appetite” is present on the buying side for new artists as well as for new contemporary art movements in general.

This year, the Beeple’s NFT sale at Christie’s, scheduled during the New York Contemporary March series may have overshadowed the important learning from this series of sales. As a matter of fact, the outbreak/ invasion of the “crypto” enthusiasts/millionaires in the (digital) auction room shifted the equilibrium of what on the paper looked like a predictable March Auction season. 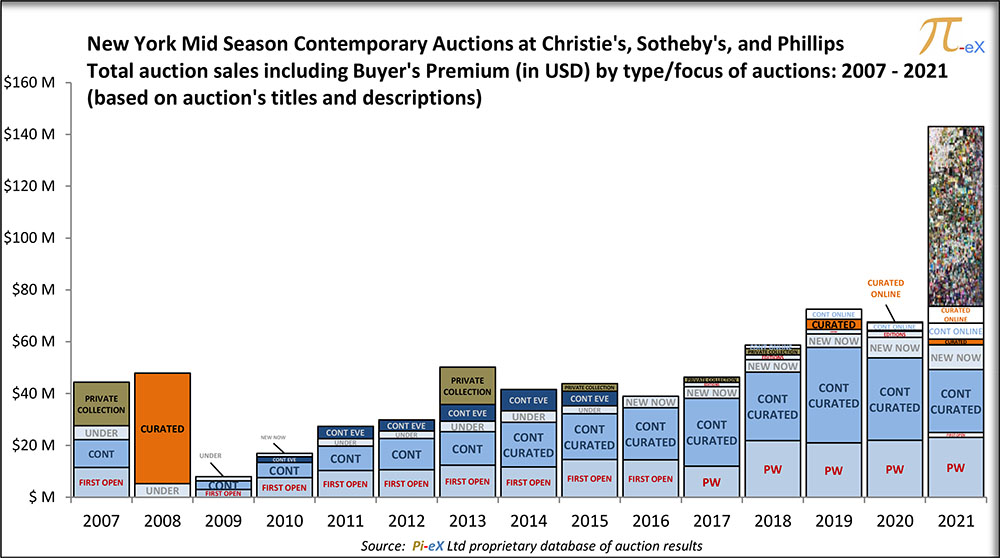 When including the Beeple's NFT sale, the mid-season contemporary series shows combined results of $143 million, more than doubling last year’s result at $68 million in March 2020. Of course, half of this year’s result is explained by one auction, even one lot, Beeple’s NFT which sold for $69 million.

The remaining sales at Christie’s, Sotheby’s and Phillips brought in $74m, which was above revenue obtained a year ago at the same sales. 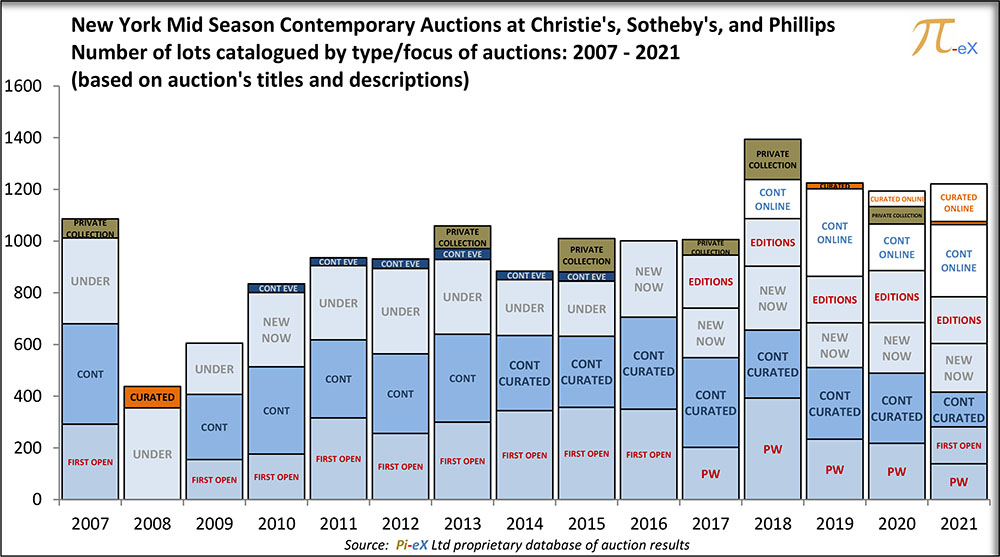 Results by auctions varies however.  Sotheby’s Contemporary Curated Sale (CONT CURATED on the graph above) for example saw the number of lots catalogued reduced by half. Christie’s Post War sale (PW) also included less lots this year but to a lesser degree as the 2021 March sale included 36% less lots than the 2020 sale. The Phillips New Now sale finally offered an almost similar number of lots to buyers as the volume of the sale only decreased by 4%.

While the reduced volume of lots catalogued may have explained part of the revenue shortfall (-31%) at the Sotheby’s Contemporary curated sale ($24m in 2021 versus $32m in 2020), it did not seem to have affected the Christie’s Post War sale which showed a 5% growth in revenue from $22m to $23m. The strongest growth was seen at the New Now Phillips sale which registered a yoy revenue increase of 16% from $8m in March 2020 to almost $9.5m in March 2021.

In the end however, volume certainly was not the key driver of value at the March 2021 New York Contemporary Sales as most value came from one single lot, paid for in crypto-currency.