Jean-Michel Basquiat is one of the best renowned and sought-after contemporary artists of our time. Trading of his artworks has been subject to fluctuations following the global economic trends. Recent public auction performances, in particular, highlighted the reliance of the artist’s market on the very high-end segment, which has been badly hurt by the successive crisis of the art market. In 2021, Basquiat’s artworks with seven-figure estimates seem to be the auction houses’ main bet for a definitive rebound of confidence on the very high-end of the art market: between Christie’s and Sotheby’s, $100m worth of Basquiat’s paintings will go under the hammer in May, including "Versus Medici" at Sotheby’s and "In this Case" at Christie’s.

But has the high-end fine art market recovered enough from the 2020 Coronavirus crisis for this strategy to be successful? What do historical results of Jean-Michel Basquiat suggest about the dynamics of his market and its future?

A volatile level of consignment, highly correlated with the ups and downs of the art market:

Over the past 14 years, collectors’ willingness to part with their Basquiat artworks has very much followed (maybe even driven) the ups and downs of the auction market. Given the value at stake, in times of crisis, collectors most likely have preferred to go private, or simply wait, rather than taking the risk of a low hammer price, or even a bought-in. 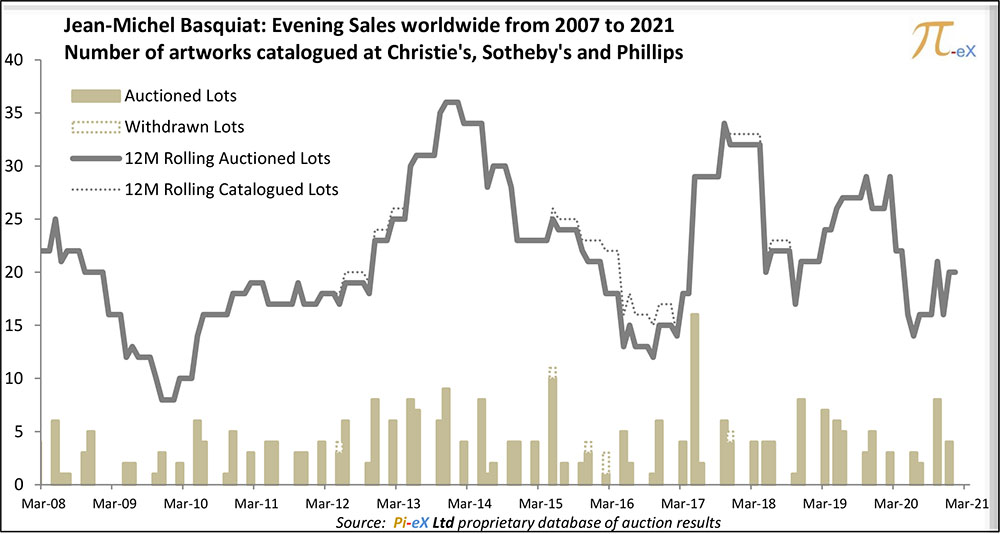 The graph above shows the 12-month rolling total number of artworks by Jean-Michel Basquiat catalogued at Evening auctions worldwide across the top 3 auction houses from 2007 on. Notably, the greatest dives in the level of consignment of Jean-Michel Basquiat's artworks occurred as the three major economic crisis of the last decade hit the art market:

The rate of consignment, or the level of liquidity for Jean-Michel Basquiat’s market, evolves strikingly according to the overall variations of the art market, captured by the Pi-eX AMI above. Indeed, expansion times in 2014 and 2018 also match the years of strongest consignment for the artist.

If market expectations have a direct effect on liquidity for the Jean-Michel Basquiat’s market, what does the scheduling of major works by the artist might suggest for 2021?

The graph below shows the history of the 12-Month rolling total Hammer Prices for Basquiat’s artworks reached at Christie’s, Sotheby’s and Phillips Evening auctions, split by price categories (from smallest/at the bottom of the graph to largest/at the top of the graph): 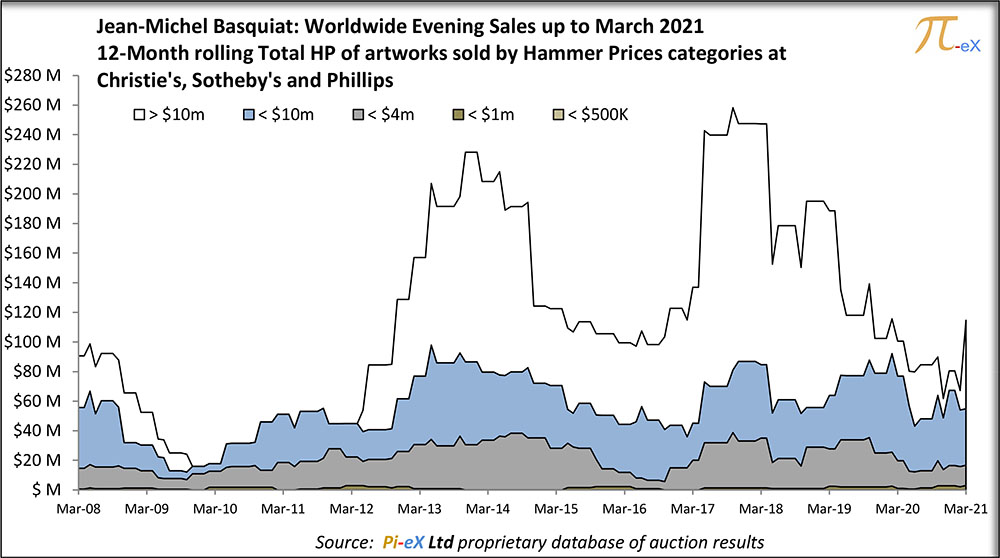 The ultra-high-end segment in white (i.e. lots sold for more than $10m each) follows an exaggerated pattern of the Pi-eX Auction Market Index (Pi-eX AMI), showing clearly two peaks in the Basquiat market, in 2014 and 2018.

On the contrary, artworks by Jean-Michel Basquiat sold for less than $10m each (in blue and grey) follow more loosely the market, and seem to be more stable: while directly affected by the 2009 crisis, the middle range priced artworks by Basquiat were less affected by the decreasing trend after 2018.

Such discrepancy between the very top end of Basquiat’s market and the rest of the artworks at Evening auctions is not explained by estimates alone: if there seems to be distinct dynamics applying to the two markets, it is also because different tools are used to position and market Basquiat’s artworks at different price points.

1. The role of Estimates on Request (EOR):

Estimates on Request (EOR) are used by the auction houses to signal a lot of high value.  Over the past 15 years, 14 artworks by Jean-Michel Basquiat (less than 5% of the total of number of artworks auctioned at Christie's, Sotheby's and Phillips) have been offered with an EOR. While small in volume, EOR play an important role in the value fluctuation of the artist's market as shown in the graph below: 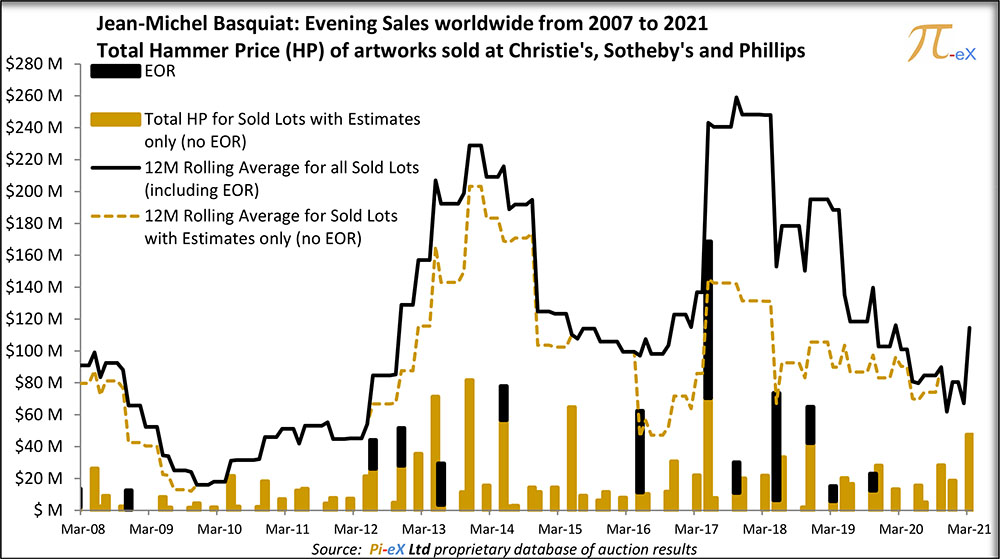 Notably the average price of artworks by Basquiat, offered at public auctions with estimates, has been stagnating since 2014. 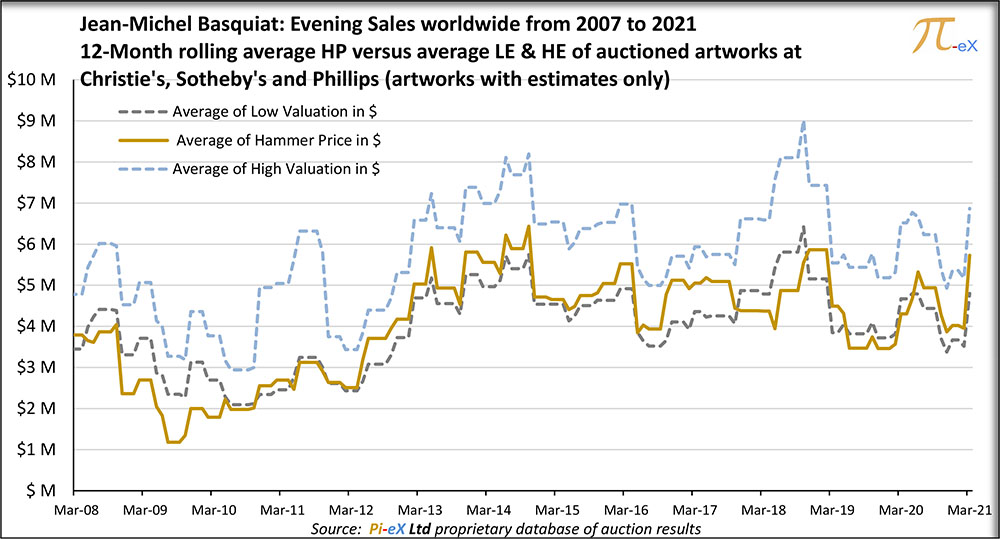 As shown in the graph above, the average price of Basquiat's artworks auctioned with estimates, grew strongly and steadily from 2010 to 2014. In the following years however the growth stopped and the average hammer price obtained at auction showed up and down volatility between the range of $4m and $6m.  Even worse, in 2018 and 2019, the average Hammer Price fell lower than the average low estimate for these artworks, indicating that potential buyers were not willing to pay the prices expected by sellers.

2. The role of Irrevocable Bids:

While Estimates on Request signal lots of high value, Irrevocable Bids indicate that a buyer already committed to buy the artwork ahead of the sale at a pre-agreed price with the auction house, in exchange for a fee in case, the work sells for a higher price than the agreed pre-auction price. 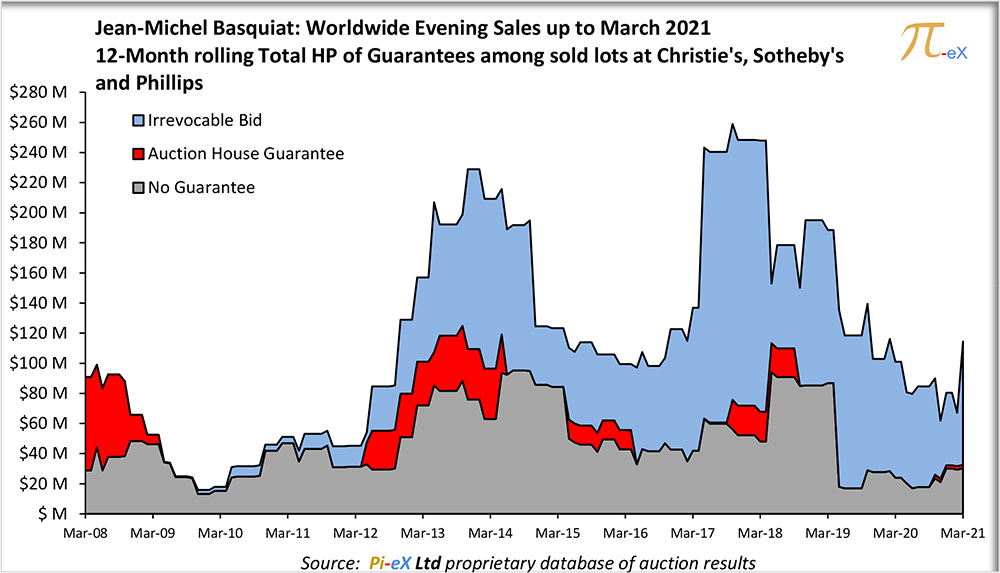 As shown in the graph above, Irrevocable Bids have played a major role in pushing value at the top of the Basquiat market.  This role however has evolved over time in a direction that may not be all positive for art investors.

From 2012 to the Spring of 2019, the total 12-month rolling hammer price value of artworks sold with Irrevocable Bids (in blue) and artworks sold without any guarantee (in grey) moved in parallel without major discrepancy.

This all changed in the Spring of 2019 when the value of arworks without guarantee plummeted while the value of artworks with Irrevocable Bids remained high.  This dramatic change indicates that the total Hammer Price for artworks with Irrevocable Bids, agreed ahead of the auction between 2 parties (the auction house and a third party guarantor) remained high while the total hammer prices obtained at public auctions for lots without guarantee - via a transparent and fair process - collapsed.

The availability of Irrevocable Bids must have been great news for worried sellers who may have welcomed a guarantee from the auction houses (rather than taking the risk to sell their artworks without a guarantee), but it surely should have been worrying for Third Party guarantors and buyers of artworks covered by Irrevocable Bids as they seem to have taken the risk to overpay for their purchase of an artwork by Basquiat during this period.

What is next for the Basquiat market?

After a challenging period in the past 2 years, the Basquiat market seems to be ready for a re-boot and rebound.

The choice of Hong Kong was surprising for two reasons:

- as shown in the graph above, no major artwork (more than $10 million) by Basquiat had ever been sold in Hong Kong before

Despite the above reasons, or maybe because of, the Christie's sale was a success as Warrior obtained a Hammer Price of over $36 million (280 million HKD).

This could very well be the beginning for a new high for the Basquiat market as major artworks by the artist are scheduled to be auctioned next week at the spring New York Marquee sales:


At Christie’s, two paintings with a third party guarantee ("In this Case" and "Untitled (Soap)") could fetch more than $70m:

- "In this Case" (offered with an EOR and an Irrevocable Bid) is expected to reach at least $50m:

On top of that, Christie’s Contemporary Day auctions include 4 paintings by Basquiat, for a total Low Estimate of $4.45m. In total, Basquiat’s offering in May is valued around $100m, and could even reach a higher price, as confidence of sellers and buyers seem to be back after a year of uncertainty, low supply and postponed auctions.

So, what comes next for the Basquiat market?

With the market for the artist so entwined with the overall dynamics of the high-end of the art market, the great come back of seven-figure-estimate paintings to the auction rooms in the Spring of 2021 certainly sends a very positive signal of confidence to art stakeholders.

Interestingly both Christie’s and Sotheby’s made Basquiat's artworks part of the highlights of their New York May Contemporary evening auctions, choosing to tour the paintings in Taipei, Hong Kong and Los Angeles for Sotheby’s and Hong Kong and New York for Christie’s.  Could this suggest that the Basquiat market may benefit from a US-China bidding competition for supremacy at the very thin top of the market?

To be continued at the end of May...

Anna Benoliel and Matteo Pace contributed to this article

From bottom left to top right: