Beginning of October is always a busy time in London as the Frieze art Fairs open their doors.  During an intense one week, artists, dealers, art advisers, collectors and anyone who is anyone in the art world come to London to view art, sell art, network, and hopefully buy art.  During the same week, Christie's, Sotheby's and Phillips assemble auctions that complement the fair and offer fine art collectors more opportunities to trade art.

Ahead of the 2019 Frieze week, Pi-eX took a look back at 12 historical years of auction sales around Frieze to better understand what has changed overtime.

1. The number and types of auctions assembled by Christie's, Sotheby's and Phillips are surprisingly similar year on year 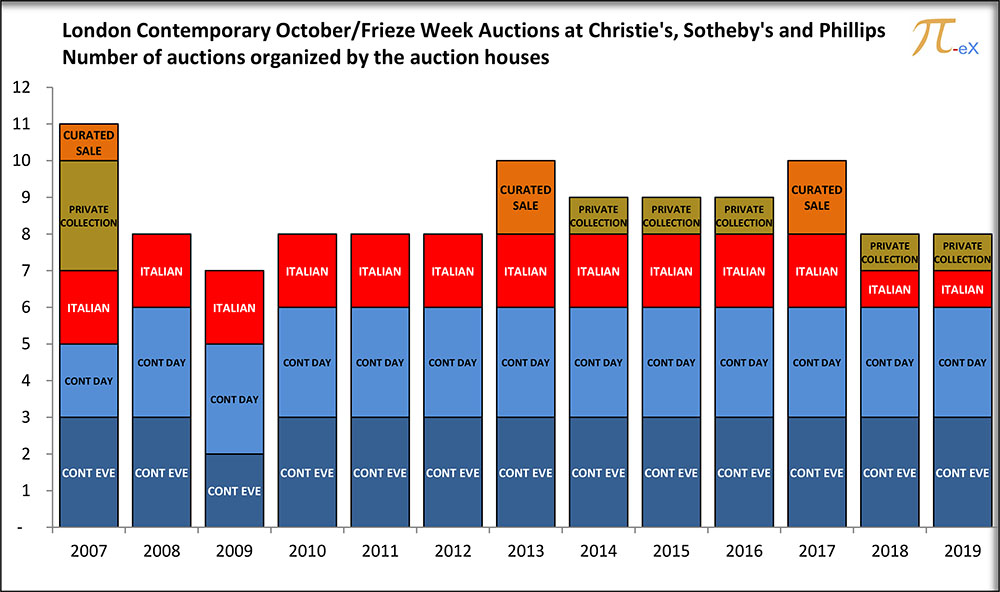 Also in addition to the previous sales, the auction houses may add to the calendar a Private Collection Sale or a Curated Sale.  As shown in the chart above, there is less regularity in these sales as they are more opportunistic, depending very much on the availability of a single owner collection or interesting works that can be assembled in a Curated Sale.

The 2019 schedule of auctions is very much in line with the past 12 years. The only remarkable event is that for the second year in a row Sotheby's made the decision not to arrange a separate Italian sale auction, preferring to included works by Contemporary Italian artists in its Contemporary Day or Evening Sales, hence leaving Christie's again as the only auction house holding a separate Contemporary Italian Sale auction during Frieze week.

2. The number of artworks catalogued has varied widely overtime

While the number of auctions assembled by the auction houses has been rather stable, the number of lots catalogued at these auctions has varied widely over time. 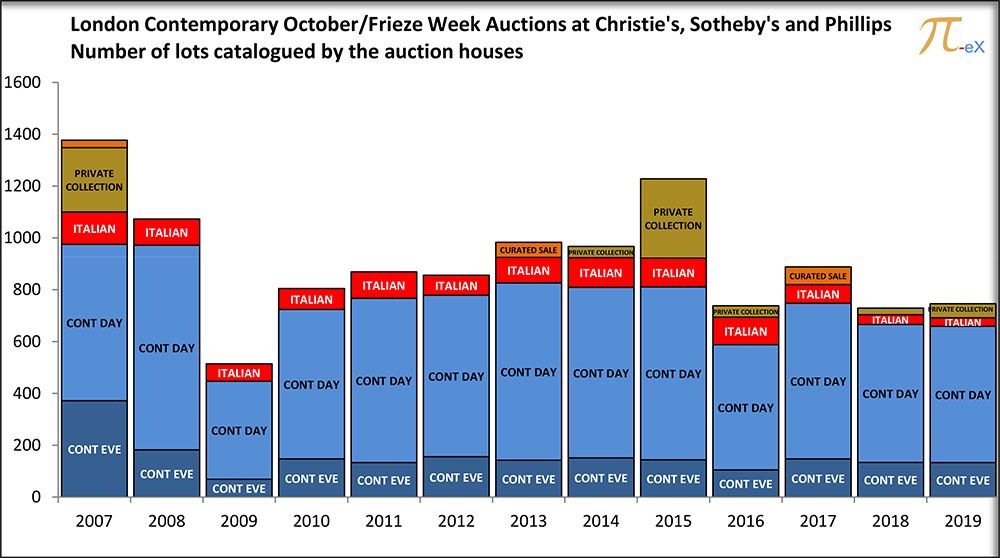 2007 was the year when the largest number of artworks were offered, with almost 1,400 lots catalogued.  Within a few years, this number was reduced to just about 500 as the art world was dealing with the impact of the 2008 crisis.  The number of lots catalogued picked again in 2015 with over 1,200 lots offered to buyers during the Frieze week.  But again the number plummeted in 2016 to just about 740 lots.

2019 seems to confirm that the trend at the Frieze auctions is a reduction in the number of lots made available to buyers.  With just 746 lots catalogued, this year can be counted as a year having one of the smallest offering of artworks at auctions during Frieze week.

3. Revenue generated by the Frieze Week Auctions has kept growing since reaching bottom in 2009

While in volume, the trend has clearly been downward, in value, there is no doubt that it is upward. Between 2009 - the bottom of the market - and 2017 - the top of the market - revenue generated at the Frieze week auctions has grown from under 50M GBP to almost 300M GBP. 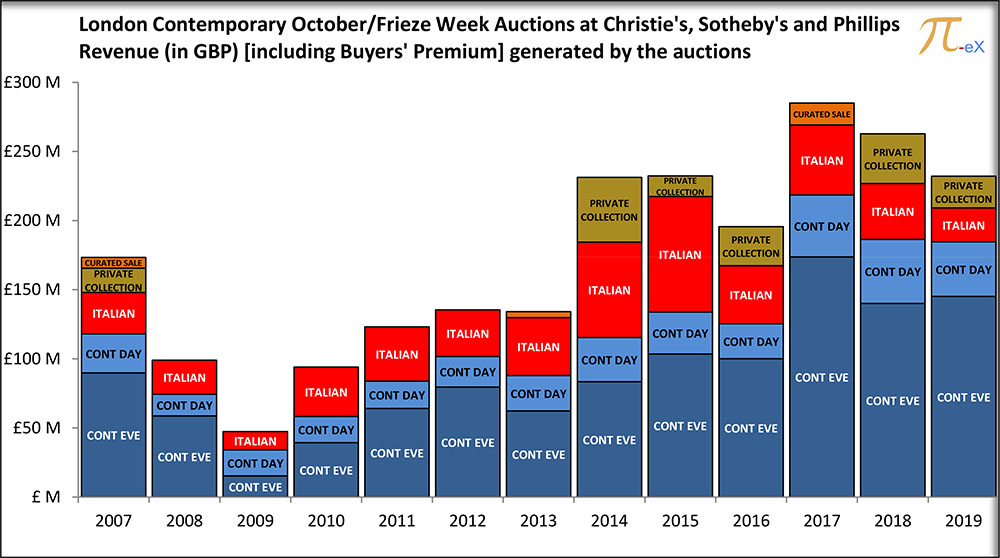 Not surprisingly most of the revenue is generated by the Contemporary Evening Sales, which have the smallest number of lots catalogued, but attracts buyers who are willing to compete at higher and higher levels for the pleasure of owning the artworks catalogued in these sales.

Rather than having a negative impact on the revenue generated by the sale, the reduction in the offering seems to have led to more competition for the remaining lots, resulting in higher prices for the sold lots and eventually larger revenue for the auction houses.

As Frieze Week is about to start, this year will tell us if it will be business as usual or if we are about to see some important changes.  Pi-eX will be following each sale and will issue reports for each of the sales.