Christie’s “The Art of the Surreal” Evening Sale arranged in London on March 23rd, 2021 confirmed, once again, to be an unmissable guest and protagonist to the yearly show of the London Spring Marquee evening sales.

The 22 sold lots generated an impressive £48.4 million (including Buyer's Premium), boosted by the second-best total Hammer Price ever achieved at the Christie's London Surrealist evening sales ... but, all that glitters is not gold.

How did Christie's expectations compare to previous years? Did final results match presale expectations? Which role did guarantees play?

Pi-eX Research analysed the results of Christie’s “The Art of the Surreal” Evening Sale to better understand what happened.

1. Surreal expectations ahead of the sale:

With a stable number of consigned lots ahead of the sale, 27 lots in 2021 versus 24 lots in 2020, prospective buyers were offered a much pricier mix of artworks, compared to a year ago, especially in the range above £4 million. 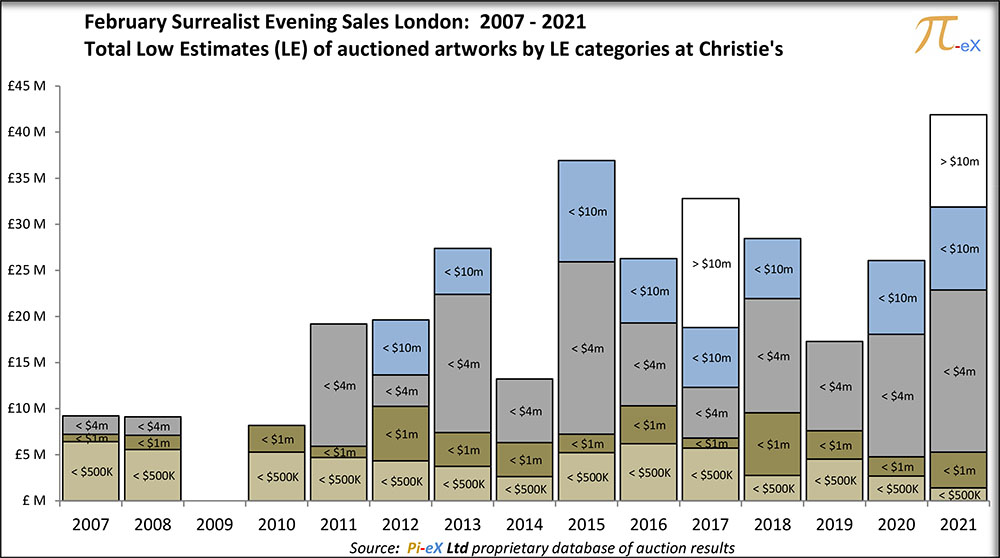 The total value of catalogued artworks dazzlingly rose from £26 million in 2020 to £42 million in 2021, a 63% growth year on year.  The 2021 offering was the highest ever offering arranged for a Christie's Surrealist evening sale since 2007, reflecting the high expectations sellers and the auction house has ahead of the sale.

2. Buyer’s bidding brought the hammer price back to earth

The total Hammer Price (HP) of £42 million achieved on March 23rd, 2021 was the second highest ever total HP achieved at a Christie's Surrealist evening auction in London. 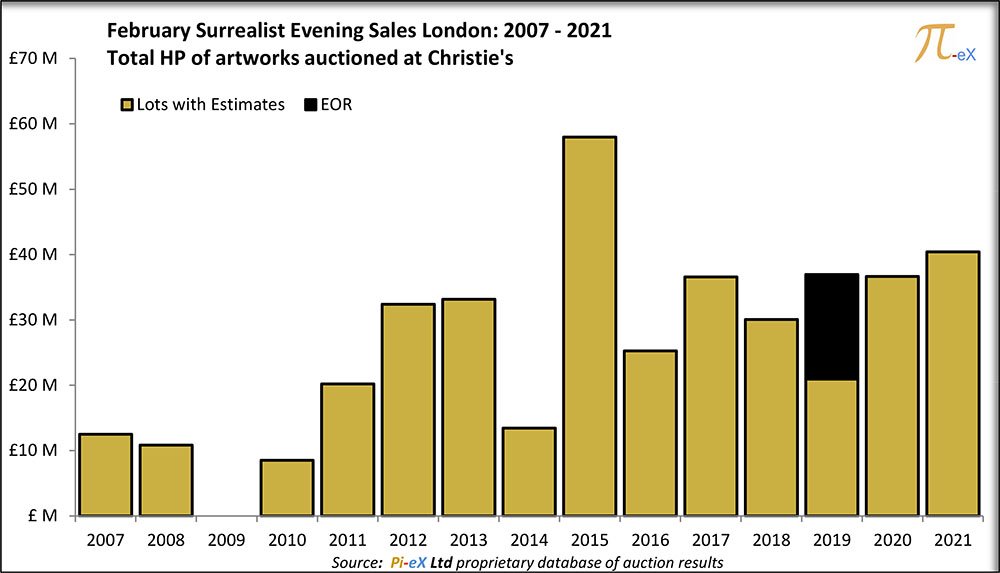 However, the 2021 Total Hammer Price did not live up to the spectacular rise in expectations preceding the sale, captured by the Initial Estimates.

The graph below clearly shows the misalignment of initial Low and High Estimates versus the effective Hammer Price results. 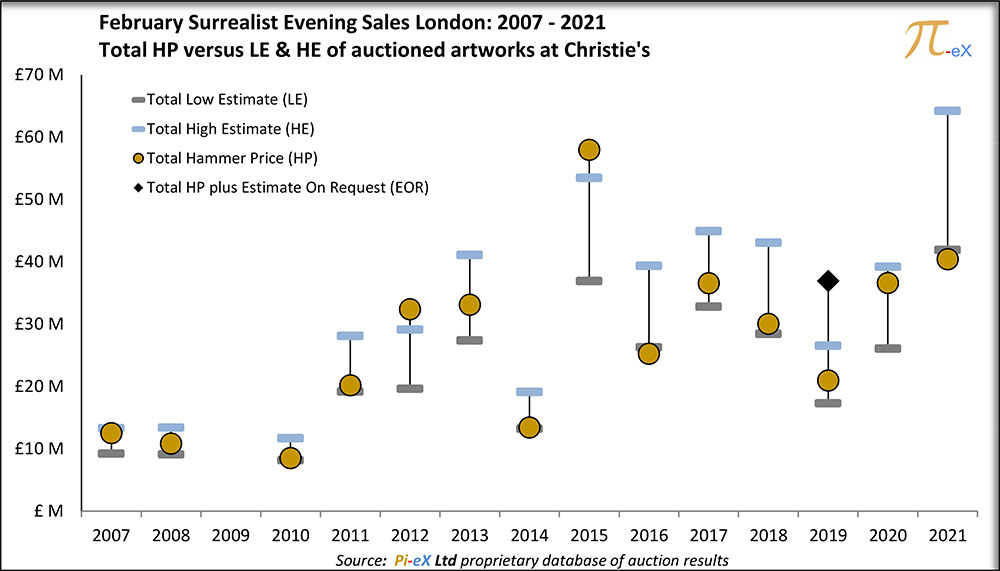 While the initial estimates more than doubled versus previous year, the total Hammer Price only grew by circa 10% from its 2020 level, increasing from 36.6 million GBP to 40.4 million GBP in 2021.

A similar level of unusually high expectations from sellers and the auction house has been seen before at the Surrealist evening sales: in 2015, at the top of the market.  The 2015 result however was tremendously different: the 2015 total Hammer Price at the Surrealist evening auction almost reached 58 million GBP, against total initial Low Estimates of less than 37 million GBP.

3. Excessive faith in the sale or too little appetite for the lots?

Further comparing results at the Christie's London Surrealist Spring evening sales in the year 2015 and 2021 can provide additional interesting information.

In 2015, the exceptional performance of artworks by Miro, was a key contributor to the overall success of Christie's Surrealist evening sale.  In 2021, artworks by Miro still obtained overall a total Hammer Price above the initial Total Low Estimates but the performance was not as impressive. 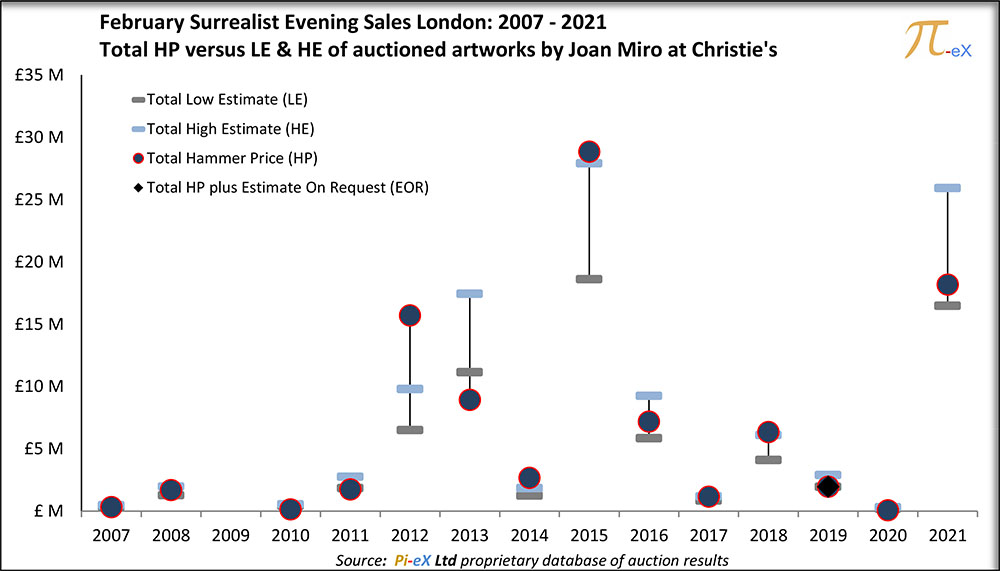 Interestingly, there were no guarantees offered to sellers on the 6 Miro artworks auctioned in 2015, which resulted in one artwork "L'échelle de l'évasion (The Escape Ladder)" being unsold (Bought-in), two artworks performing under their Low Estimates and three artworks obtaining Hammer Prices far above their Low Estimates.

Artworks by Rene Margritte also contributed to the sucess of the sale in 2015, but not so in 2021. 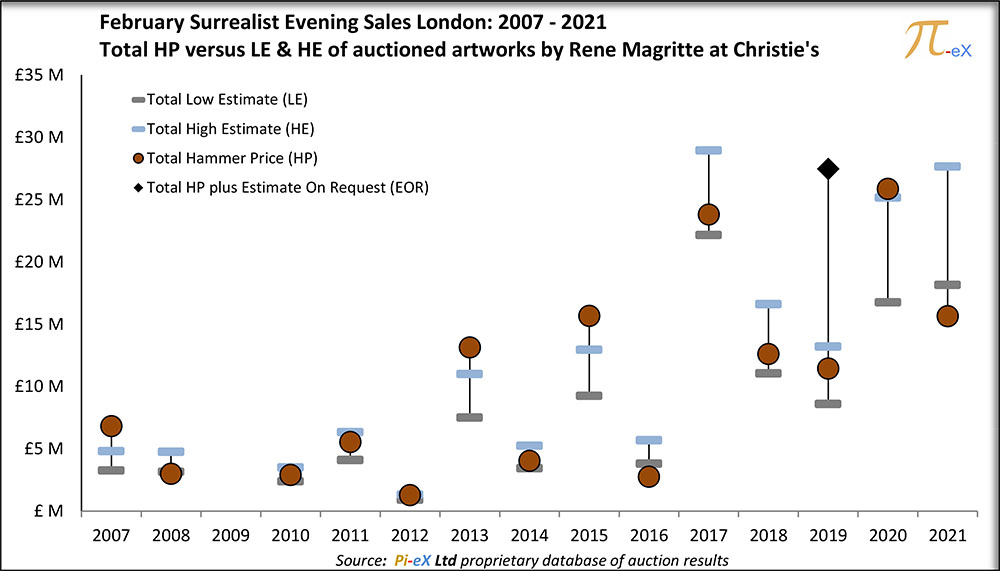 In 2015, Christie's auctioned 9 artworks by Magritte, none of which were covered by a guarantee. All artworks obtained Hammer Prices at or above their initial Low Estimates.

In 2021, two artworks out of six were covered by Irrevocable Bids and the average Low Estimates for Magritte artworks being auctioned jumped from £1 million in 2015 to £3 million in 2021. After the sale, the top two lots were either bought-in, or with a Hammer Price below the Low Estimate.  The remaining  lots had average estimates below £3 million and sold with Hammer Price above their Low Estimates.  Results overall did not look as impressive as in 2015 as the top two lots failed to perform.

Finally an important difference between 2021 and 2015 is the performance of all other lots beside the Miro and the Magritte lots. 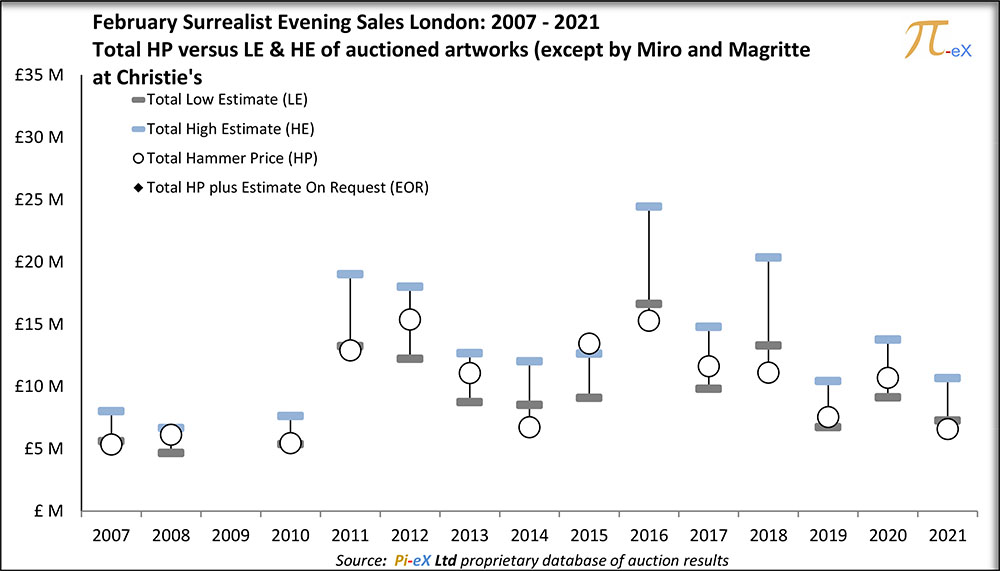 As shown in the graph above, in 2021 the performance of other lots was overall below their initial total Low Estimates (which already were lower than in the previous year), while in 2015 lots beside the Magritte and Miro lots performed well beyond their initial Low Estimates.

The disappointing performance of these lots, which tend to be less covered by Third Party Guarantees, could be a sign that the market is still in the process of recovering and that the confidence of buyers and sellers is not fully back yet.

Christie’s overshooting high expectations for “The Art of the Surreal” evening auction in London might have just shown that some part of the market is still struggling. Third party guarantees for top lots are definitely a winning tool to bring supply to the bidding rooms at low risk for the auction house. However, they may also be the reason behind the sudden jump in initial estimates (especially for top lots) and the reluctance to overbid on the part of buyers.  As the art market bounces back, it is certainly a trend to monitor in 2021.

Matteo Pace and Anna Benoliel contributed to this report