The October 2020 London Contemporary Evening sales at the three leading auction houses reflected both sellers’ nervousness and buyers’ hesitation.  Regardless of the “certainty” provided by the 36% coverage of Third-Party guarantees (based on Low Estimates), the atmosphere during the sales felt tense and heavy. In the end, the results showed the overall little excitement as the £102 million total combined Hammer Prices (HP) for the three sales fell close to the expected combined Low Estimates (LE). This was the worst-registered total HP since 2016, brought by a softening of average prices and a reduced volatility.

1. This year the nervousness of art sellers transpired in many ways before and during the auctions:

At 117, the number of lots catalogued for the three London October Contemporary evening sales was the lowest since 2016 and 2009 when they exceptionally fell to 107 and 69 respectively. 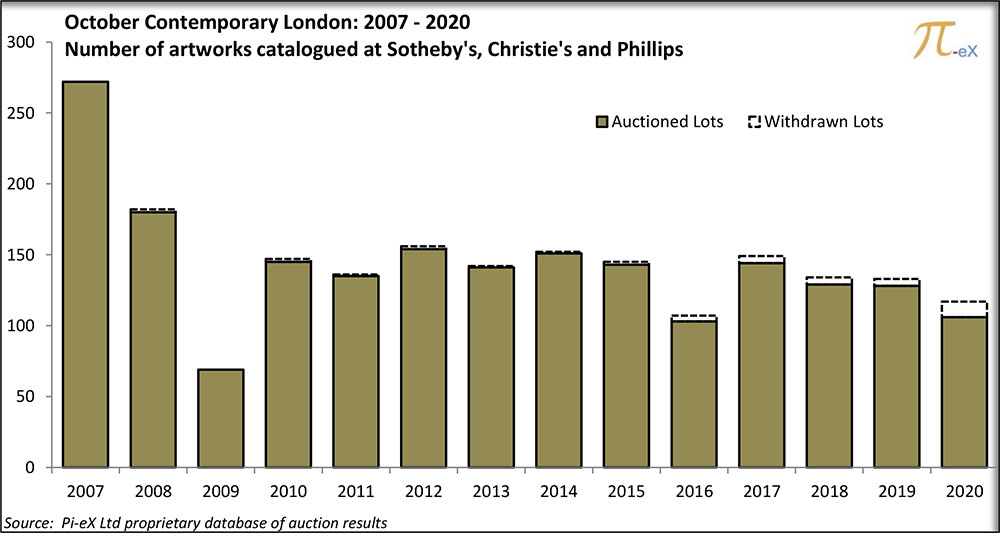 In addition, the number and value of withdrawn lots this year was by far the largest ever. There are no comparable in the history of the October London Contemporary evening sales to the 2020 record of 11 lots valued together at almost £18 million and withdrawn, either before the auctions or even during the auctions. Since 2007, the previous record in the number of withdrawn lots had been 5 lots withdrew in 2019 for a value close to £9 million. 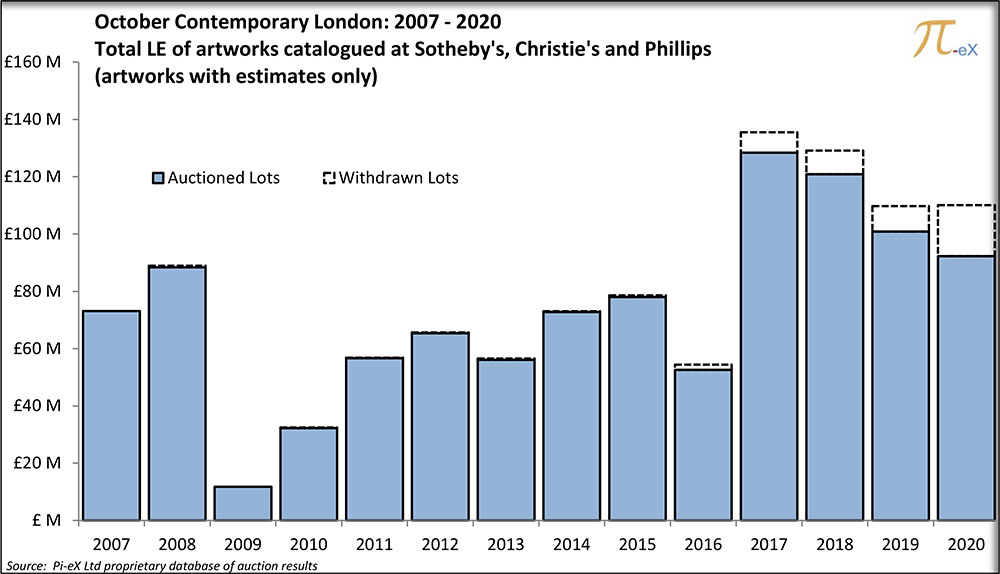 In the end, the final offering from the auction houses showed that the most anxious sellers were the ones holding artworks with Low estimates between £1 and £4 million. Artworks in this price range are more difficult to sell than lower priced artworks and tend to not be covered as much by Third party Guarantees contrary to higher priced range artworks.

2. Reserve and Caution were the answers from art buyers as they seem to avoid bidding battles and were able to buy art at prices below estimates

This year less than 40% of the lots offered for sale achieved Hammer Prices above their initial Low Estimates. This was the worst performance since 2012 and 2008 and a clear indication that buyers were not willing nor inspired to outbid others. 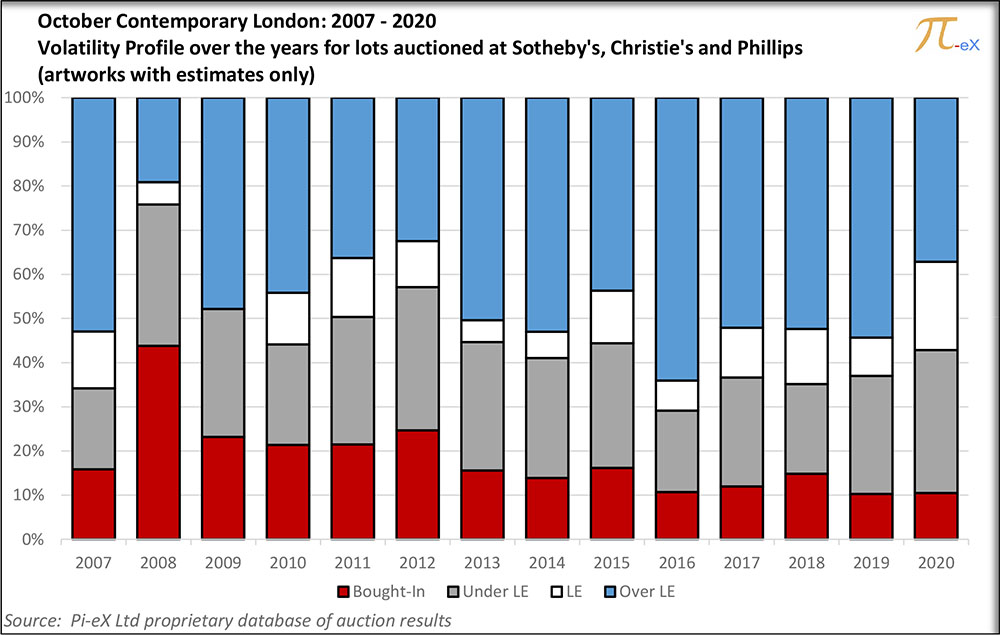 Interestingly, at 10%, the rate of Bought-in (unsold) lots remained extremely low, as the majority of lots auctioned (52%) were sold for Hammer prices at or below their Low Estimates.

While historically a low Bought-in rate is a sign of a healthy market, here it seemed to reflect more the combination of 1) a large number of Third Party Guarantees (preventing artworks to be bought-in via pre-sale agreements) and 2) a willingness from sellers to accept prices significantly below their Low Estimates rather than going home with a bought-in.

The combination of both factors led to a rather unclear direction with the total Hammer Price for lots with estimates (£90m) landing just below the total Low estimates (£92m), while an additional lot with an Estimate on Request (EOR) and a Third Party Guarantee for almost £12 million brought the Total Hammer Price to £102 million. 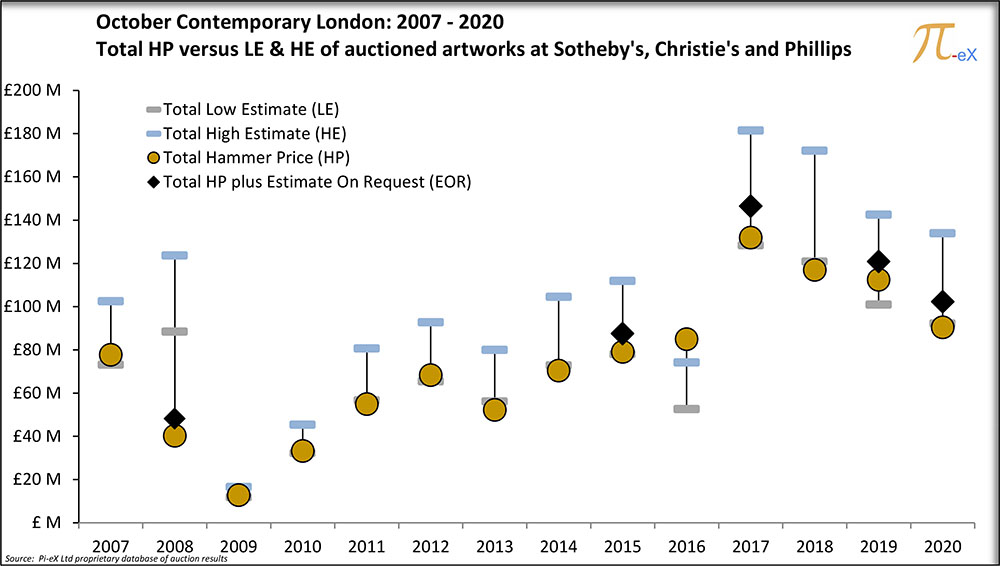 3. The outcome of sellers’ and buyers’ behaviours was a softening of prices and a reduced volatility

As nervousness was combined with hesitation at the London October Contemporary evening sales, average prices started to take a turn down. 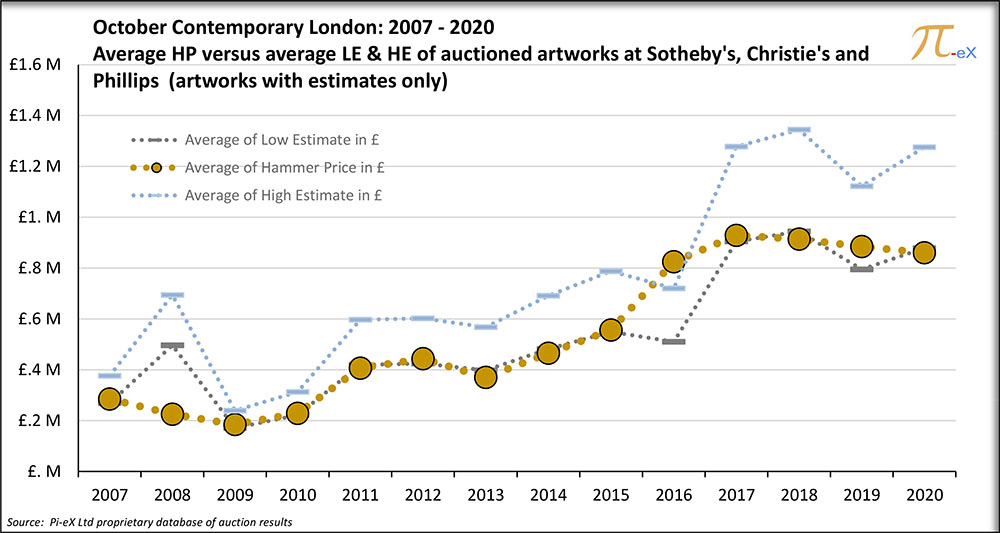 This is clearly visible in the chart above, where after consecutive years of average Hammer Price growth from around £400K to over £900K, the plateauing following by a slight decrease is undeniable, despite average estimates still pointing higher.

With less bidding battles and few bought-ins, the intra-sale volatility was reduced this year as indicated in the chart below. 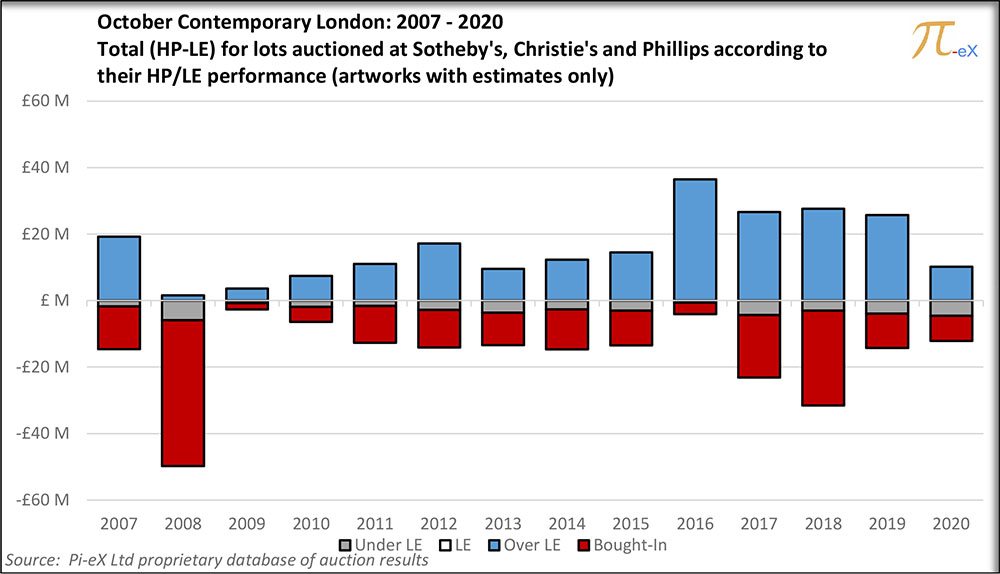 While the reduced volatility may seem appealing, historic trends show that it is usually a sign of a depressed market as in 2009.

Do the plateauing of prices and the reduced volatility mean the end of the contemporary “art” boom in favour of other collecting categories who may have performed better under the current conditions? It is still too early to say, but collectors should definitely watch this space especially if they are or will be in need of liquidity in the short horizon.

Matteo Pace contributed to this report.

Photo by Louis K. on Unsplash