On March 25th, Sotheby’s Art Impressionniste et Moderne Evening sale in Paris achieved an impressive total of almost 37 million euros with buyer’s premium ($43.5 million), far beyond all historical performances for the same auction. The sale was positioned as the first act of the London Spring Marquee sales and was followed by Sotheby’s Modern Renaissance sale, a cross-category auction combining the traditional London Impressionist and Contemporary sales - with two Old Masters paintings on top.

While Sotheby's has arranged Impressionist & Modern auctions in the Spring in Paris for more than a decade, the French sales always remained in the shadow of London and the results stayed modest.

Have things changed in a post Brexit world? What does Sotheby’s astonishing performance at the Paris Impressionist and Modern art auction suggest for the future of European fine art auctions?

The build up of two auctions for a single high profile evening: Paris first, London second

The auction in Paris focused on Impressionist and Modern art, while London Cross-category combined the traditional Contemporary and Impressionist auctions - and included some Old Masters. However both offerings had, for the first time, a lot in common:

1. Low supply in Paris as well as in London:

Both in Paris and in London, the number of lots catalogued were the smallest ever and parted from comparable historical offerings.

On the one hand, Sotheby’s arranged the Impressionist and Modern Evening auction in Paris with only 35 lots, decreasing sharply its offering versus the same auction in 2020 (-57% yoy). 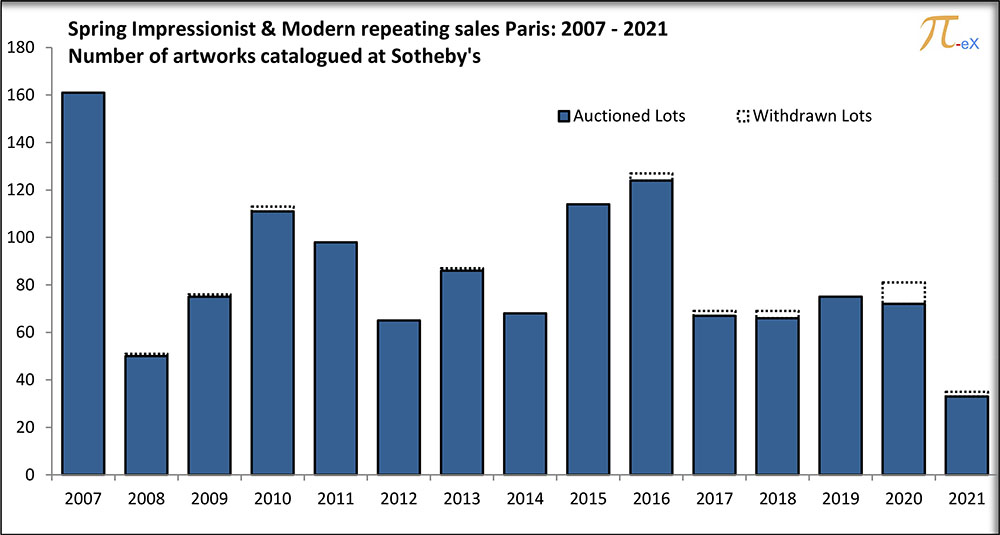 As for the Cross-Category evening sale in London, only 52 lots were catalogued, a drastic cut (-35% yoy) when compared to previous combined Contemporary and Impressionist evening auctions in London. 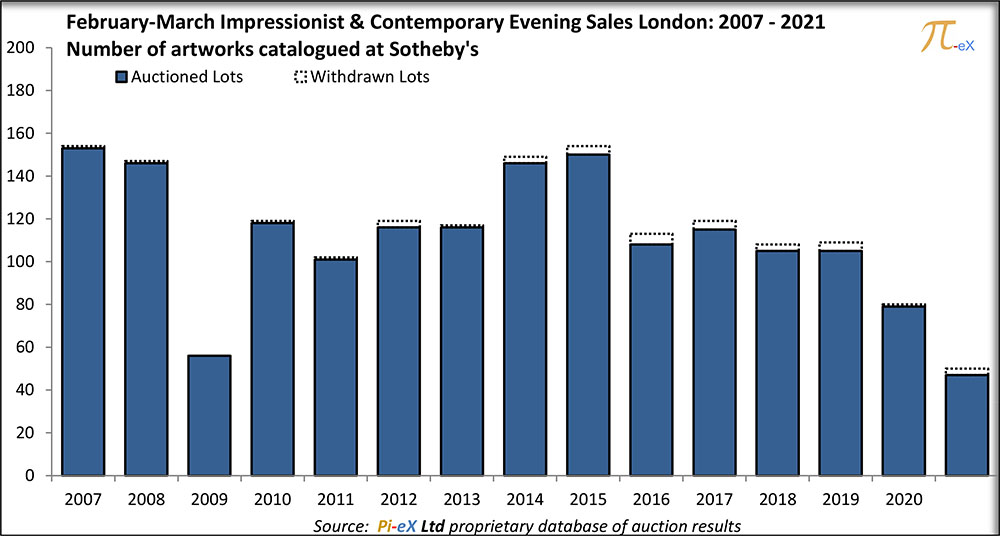 The current market environment certainly contributes to the lower supply: sellers hesitant to consign during the pandemic are most likely one of the reasons behind the launch of cross-category auctions since the summer of 2020. Nevertheless, keeping supply low could also be a strategy to orchestrate fiercer bidding battles around fewer lots.

As demand increases again on the high-end, playing with the equilibrium between volume and value seems to be the auction houses’ main bet for a rebound of the art market.

2. The rise of Paris, the down of London

Despite low volume, Sotheby’s offices in Paris did not prepare for a small sale: the total Low Estimate (LE) ahead of the sale was 20m EUR, the highest offering for a March Impressionist & Modern art auction in Paris, a 143% increase compared to the 2020 total LE. 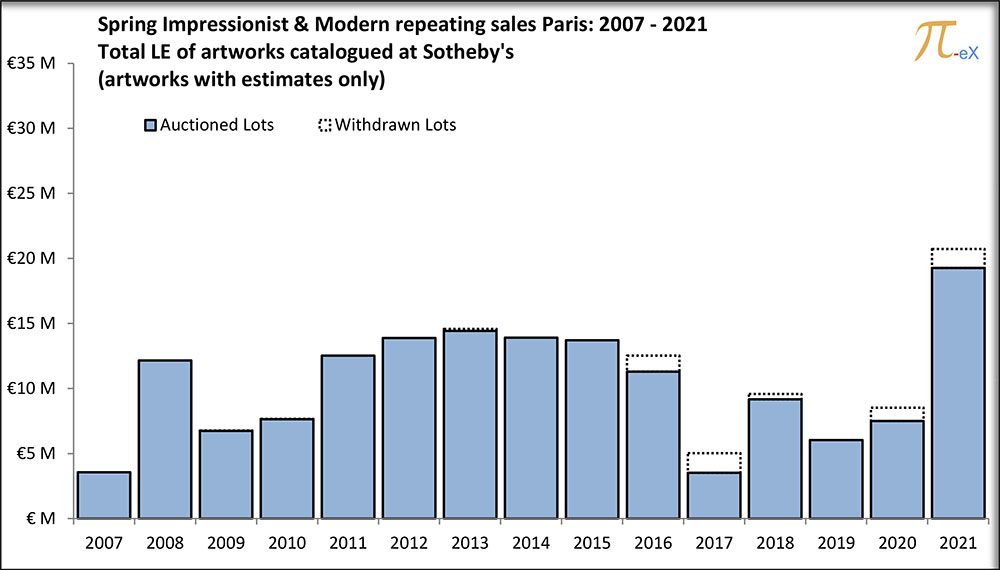 At the same time, the total LE of 67m GBP for the Cross-Category Modern to Renaissance auction in London clearly indicated a an impressively reduced offering versus 2020:  - 46%. 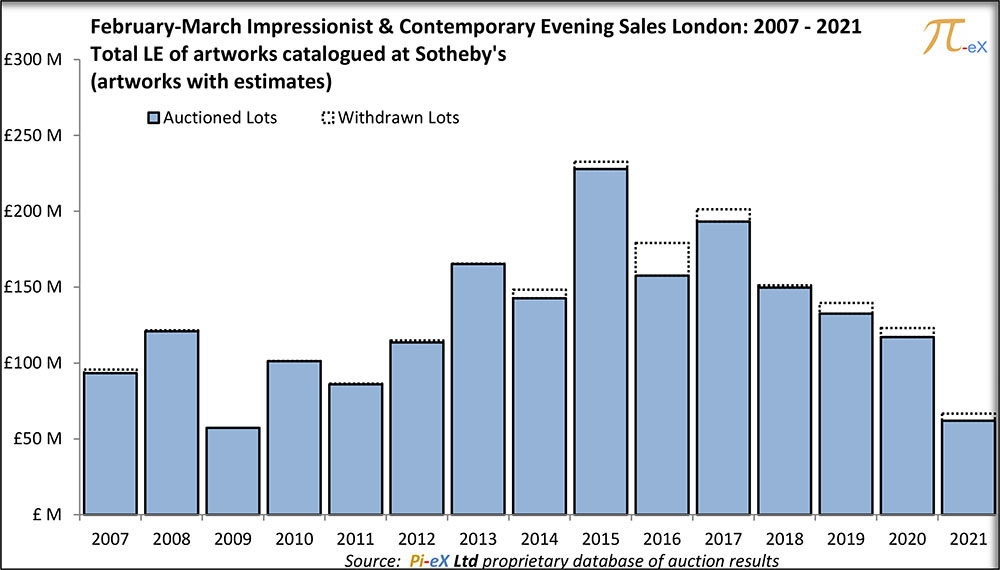 Although there is still a gap in value between both auctions, the sharp increase in Paris is simultaneous to the London decrease. Not to mention that one auction was Contemporary and Impressionist combined, when the other was just an Impressionist and Modern Sale. This could at least indicate that, in a post Brexit world, it may make more sense to auction some valuable Impressionist artworks in Paris rather than in London, especially when both sales are in any case livestreamed over the internet.

3. Guarantees: a first in Paris while a thing of the past in London?

Another sign of the sudden change in profile of the Sotheby's Paris Impressionist and Modern March evening auction is the resorting to third party guarantees for the first time ever at this auction. 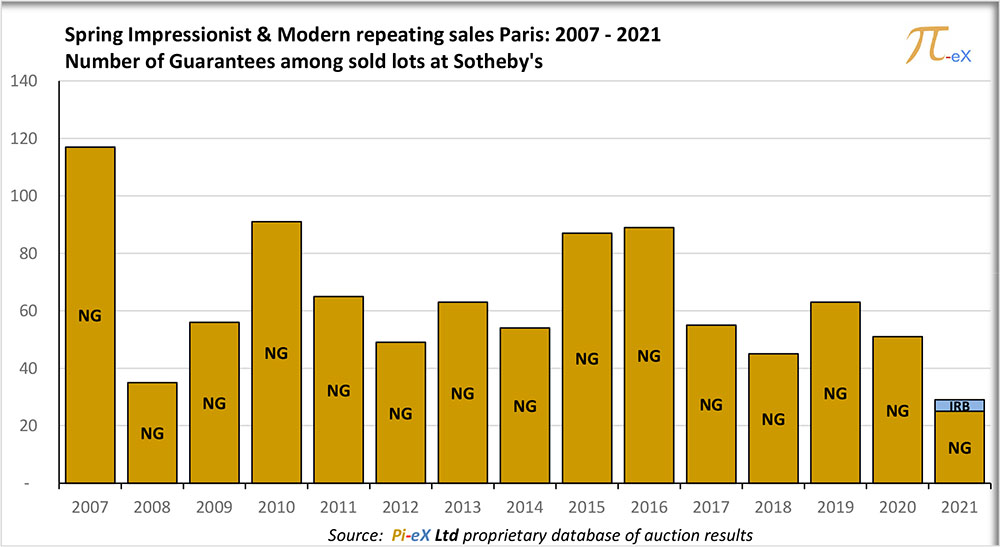 Interestingly, the coverage by third party guarantees was significantly lower in London and concerned only 8 artworks this year, perhaps suggesting that the stakes - and some of the most valuable artworks- were shared with Paris. 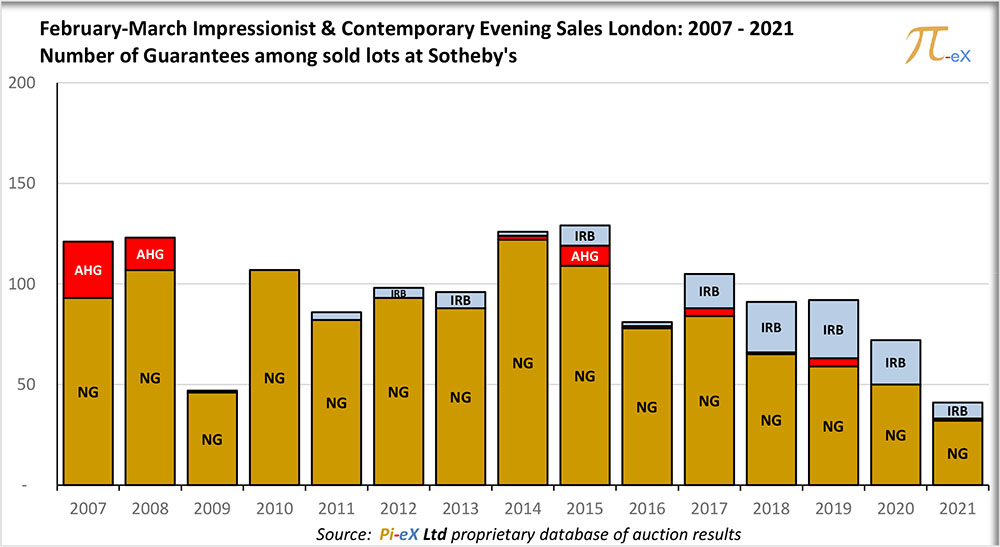 Success on both sides of the pond, but it certainly felt sweeter in Paris than in London

1. Best results ever in Paris:

In Paris, the results for the Sotheby's Impressionist & Modern art evening sale were indeniably excellent with the total Hammer Price (30.4 million euros) higher than the total High Estimates (29 million euros). 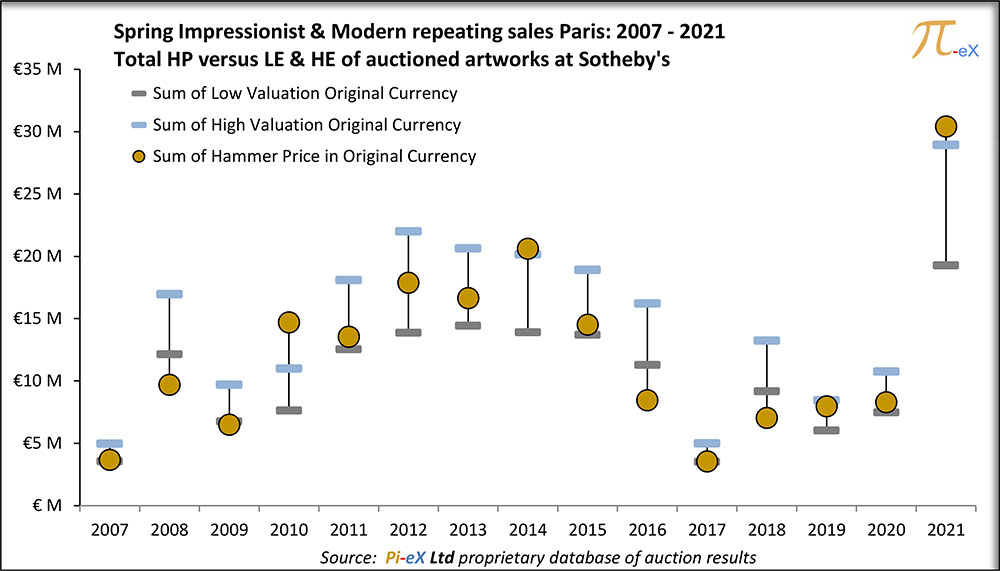 Behind the high total hammer price was fervent bidding as more than 80% of artworks auctioned obtained Hammer Prices above their initial Low Estimates.  This was clearly a departure from resultsin the previous years when less than 50% of the lots obtained HP above their LE. 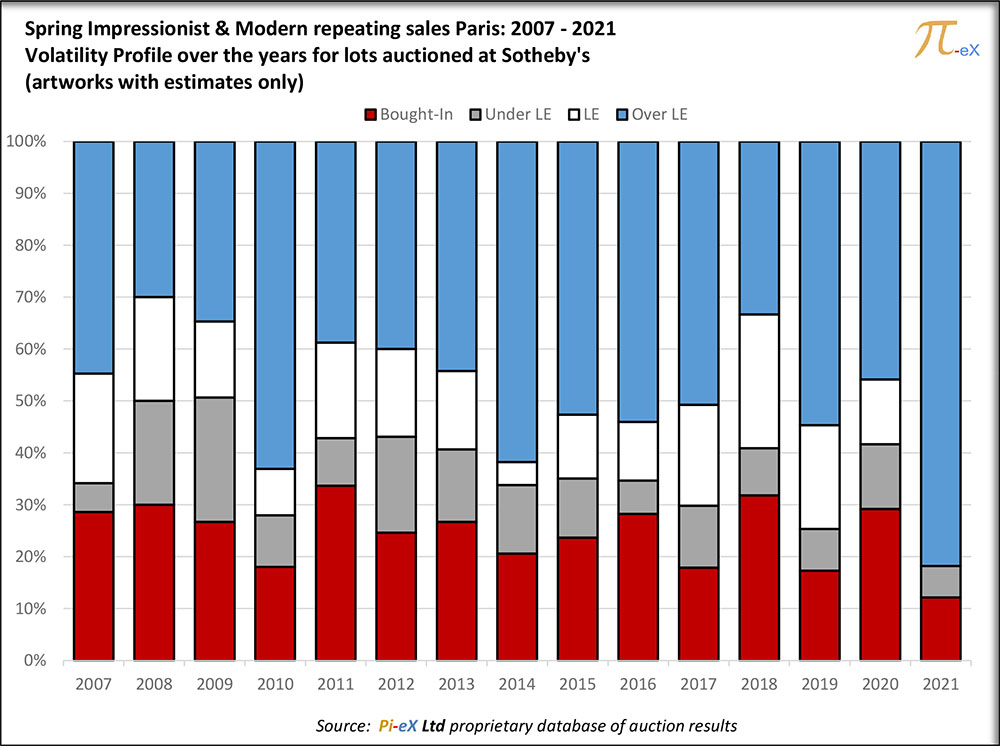 2. Positive but bitter results in London:

In London, the total HP for the Cross Category sale (81 million GBP) was also comfortably above the initial total Low Estimates (62 million GBP).  The historic trend however showed a sale decreasing in importance year after year. 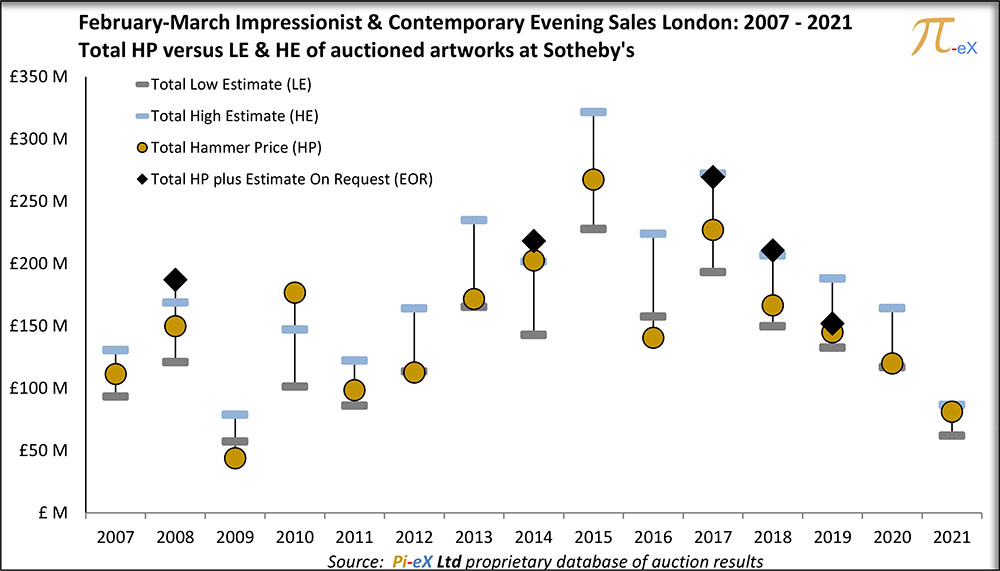 While the overall performance versus initial estimates was good as shown above, individual lots did not perform as well in London as they did in Paris since less than 50% of the lots obtained HP above their initial LE, leaving many sellers with HP close to their reserve prices. 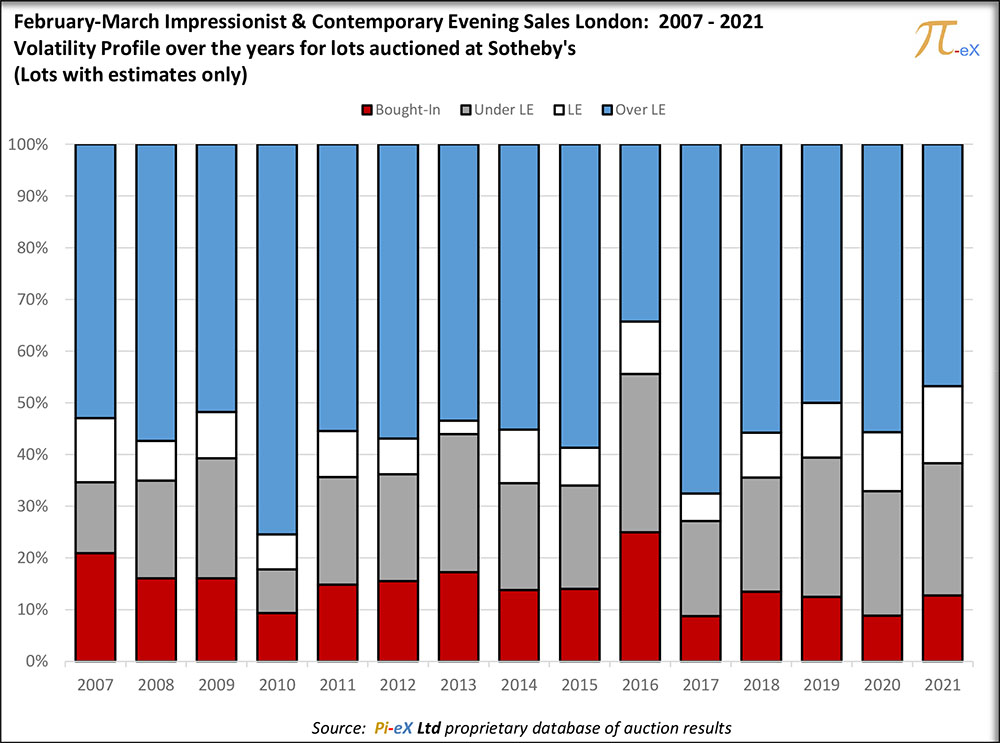 Over the past few years, Brexit has raised many questions about the future of the European art market and sparked different hypotheses around its relocation.

On March 25th 2021, the dynamic at the Sotheby’s Paris and London auctions might have been the first evidence of a new shift of value - and perhaps power - in a post Brexit world. Sotheby’s already attempted to draw attention to Paris this fall, but its “Entente Cordiale ''- themed auctions still laid bare the significant imbalances between the two major cities - and the pandemic blurred the line.

As the art market recovers, future will tell if the March 2021 auctions were just outliers or if they set a precedent that will only grow in the coming years.

They might also be the first delivering results of a long-term strategy to conciliate London and Paris as the two main hubs for the European art market.

Anna Benoliel contributed to this article