On November, 15th 2018, Christie’s notoriously hammered Portrait with An Artist (Pool with two Figures) for $80m. At the time, the 1972 painting by British artist David Hockney broke the record of the most expensive price for an artwork by a living artist. Ever since, major works by the artist make the highlights of Marquee evening auctions at the top three auction houses, and often drive the highs of the auction market.  Are all Hockney artworks guaranteed to perform well at auctions? How did the Covid19 crisis impact the trading of artworks by the artist?

During the May Marquee auctions, Sotheby’s Contemporary Evening sale included two paintings by David Hockney. One of them, Ian Watching, fetched a $1.7m hammer price, below its $1.8m Low Estimate. The other, Self-Portrait on the Terrace, with estimates of $8 and $12m was withdrawn from the auction at the last minute.  Are these signs of feverishness in the Hockney’s market?

As another major Hockney artwork is to be auctioned on June 23rd at the Phillips New York Contemporary Art Evening sale, Pi-eX Research looked back at historical data to make sense of the market for David Hockney at the top 3 auction houses : What have been the drivers behind the growth in value of Hockney’s artworks?

What is the current state of the market for David Hockney?

1. From British artist to International market maker: the role of major exhibitions

While David Hockney had been an established artist well before 2008, the rise in value of his paintings on the secondary auction market shows the direct role played by major retrospectives on the reputation of an artist. 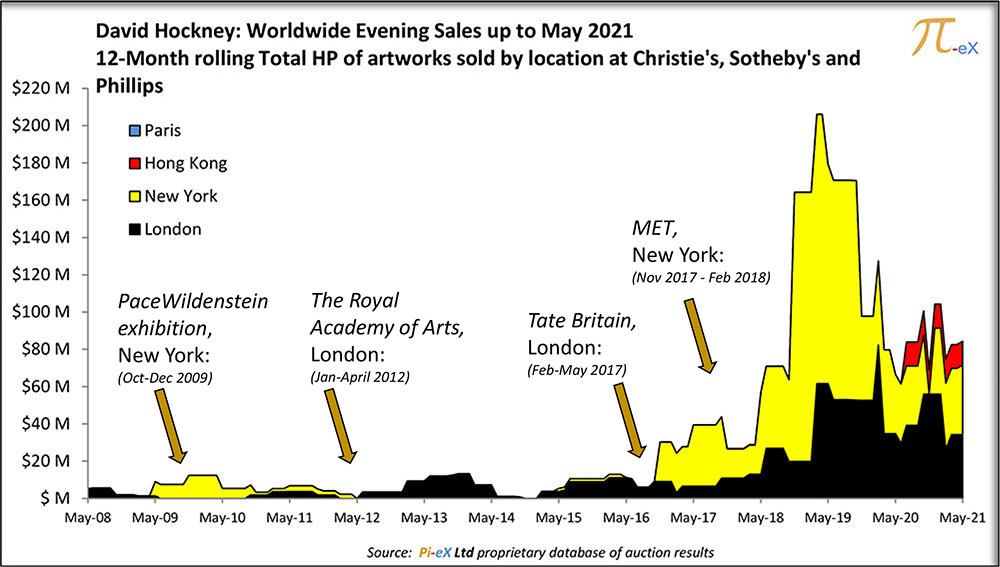 In New York, then gallery PaceWildenstein created renewed interest in Hockney's art by arranging his first exhibition of new paintings in the big Apple in over 12 years from October to December 2009.  In London, a notable surge in value of artworks by David Hockney traded at auctions started in February 2013, when the total value for his artworks sold at the top three auction houses over the previous 12-months rose from $3 million in January 2013 to over $12 million in June 2013, just a year after the exhibition at the Royal Academy of Arts closed.

Five years later, in February 2018, a major touring exhibition ended at the Metropolitan Museum, after a stop in Paris (Centre Pompidou) and in London (Tate Britain). The value of artworks by David Hockney immediately rose from $24 million to $71m in June 2018 a few months after the closing of the exhibition. From this date on, the price of Hockney’s works on the secondary market sharply increased as auction houses started to devote their marketing efforts to Hockney’s artworks, after witnessing the rise in value resulting from previous curatorial efforts. 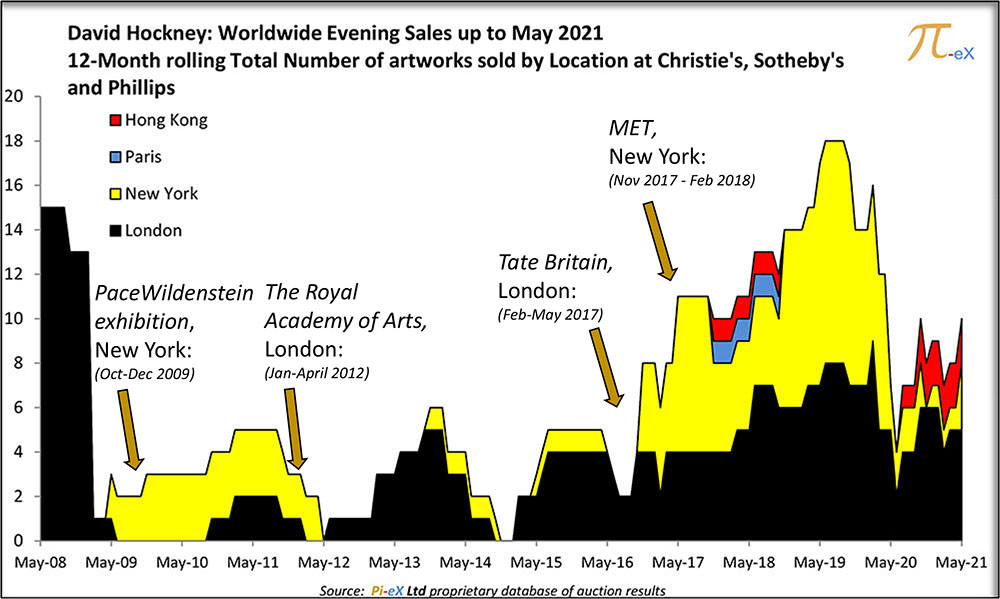 Comparing this graph showing the number of Hockney’s artworks sold at the top three auction houses to the above graph in value indicates that the years when the value rose correspond to years when more sellers consigned their Hockney at auction. In February 2013, the number of paintings sold increased from 2 to 7 at the end of 2014. In February 2018, the number of artworks sold rose from 9 to 13. This suggests that sellers might have anticipated the stamp of major cultural institutions as having a positive impact on estimates, or that they waited to sell works leased to institutions, with added provenance.

The level of consignment also shows the drastic change in dynamics for David Hockney’s market: from 15 artworks sold in London in 2008 for $3.6m to 15 artworks for $70m mid 2018, the prices of artworks by David Hockney have been multiplied by 20 over 10 years.

2. The Bigger Splash : the effect of a record painting on the rest of the market

Major exhibitions have fuelled an increase in value over 10 years resulting in a remarkable and progressive rise in value of Hockney’s paintings on the secondary market. But the “consecration” as the most expensive living artist came from New York bidding rooms in November 2018. This date marks the beginning of a new era for prices on Hockney’s market: 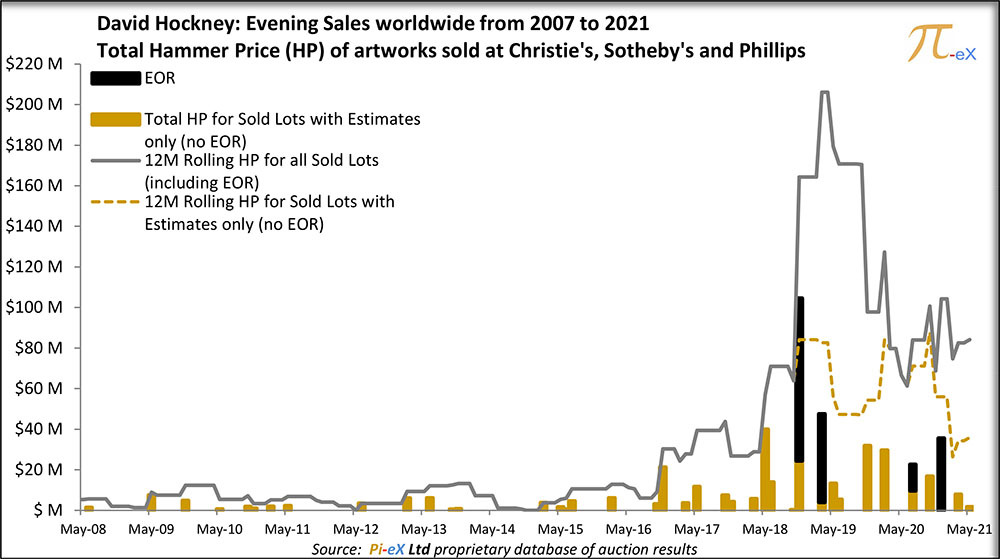 In November 2018, Christie’s auctioned Portrait with An Artist (Pool with two Figures) for a $80m hammer price (the first black bar on the above graph). After the exhibitions, the marketing efforts from Christie’s helped to increase the value of paintings by Hockney traded over the previous 12 months from $30m in the beginning of 2018 to over $164m in November 2018 - a 350% increase in less than a year. At the time, the Estimate on Request signaled the work as a high value lot, while the absence of reserve (minimum amount under which the seller would not sell the artwork at auction) indicated that the price fetched would reflect “the fair value” of the work. 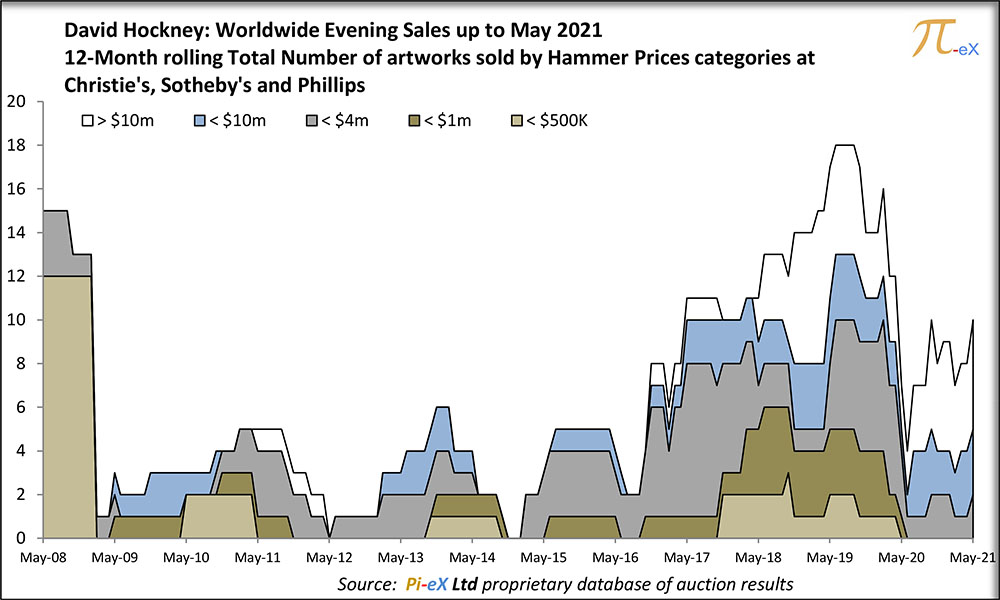 The creative strategy along with the well-advertised price of the painting moved Hockney’s market to new highs : from November 2018 on indeed, the number of paintings by Hockney sold for less than $1m plummeted. On the other hand, artworks for more than $1m increased, until they became the only artworks remaining at Evening auctions in 2020. This suggests that estimates offered by auction houses or value targeted by sellers for David Hockney’s artworks dramatically increased from 2018 to 2021, following Christie’s “coup”.

With all sellers hoping to sell their artworks for more than $1m, less and less artworks have been auctioned in recent years, likely because, with the value involved, sellers would rather hold on to their Hockney than taking the risk to obtain a lower price or a bought-in (unsold lot) - as illustrated by the latest withdrawal at Sotheby’s Contemporary Evening auction in May 2021.

What is happening with the David Hockney market?

For six years, from May 2013 to May 2019, artworks by David Hockney auctioned at Christie's, Sotheby's and Phillips obtained on average a Hammer Price (HP) exceeding the initial Low Estimates (LE): 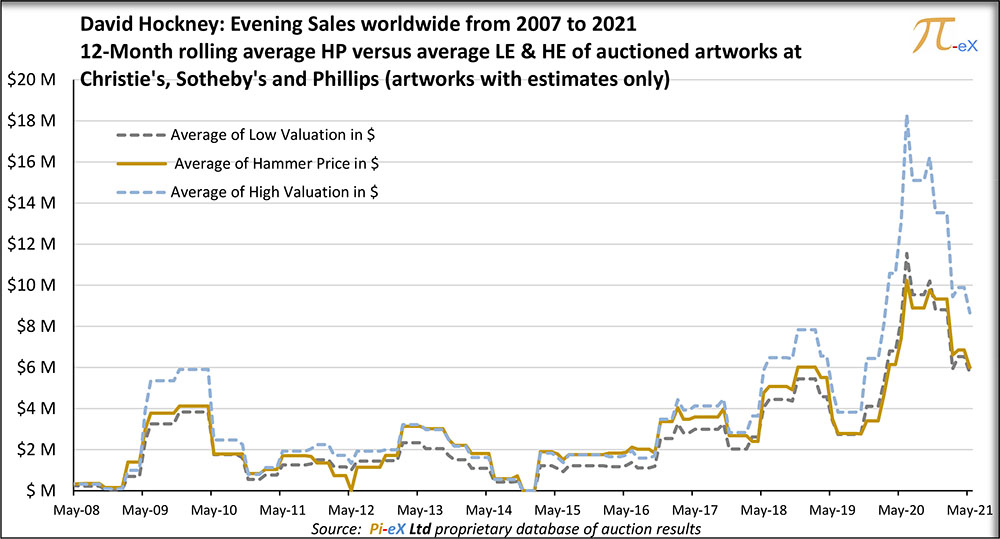 In line with the general slowdown of the auction market in the Spring of 2019 as indicated by the Pi-eX Auction Market Index (AMI), the Hockney market showed signed of trouble as early as May 2019: not only the average estimates fell but also the average Hammer Prices started to decrease and come short of the average LE.

In the middle of the Coronavirus crisis however, despite the market downturn and the dive in Hammer Prices for Hockney’s artworks, the average estimates started to increase with a steep slope, from $3m to $10m average low estimates. What happened?  Prices for Hockney's artworks have been kept afloat with the help of third party guarantees: 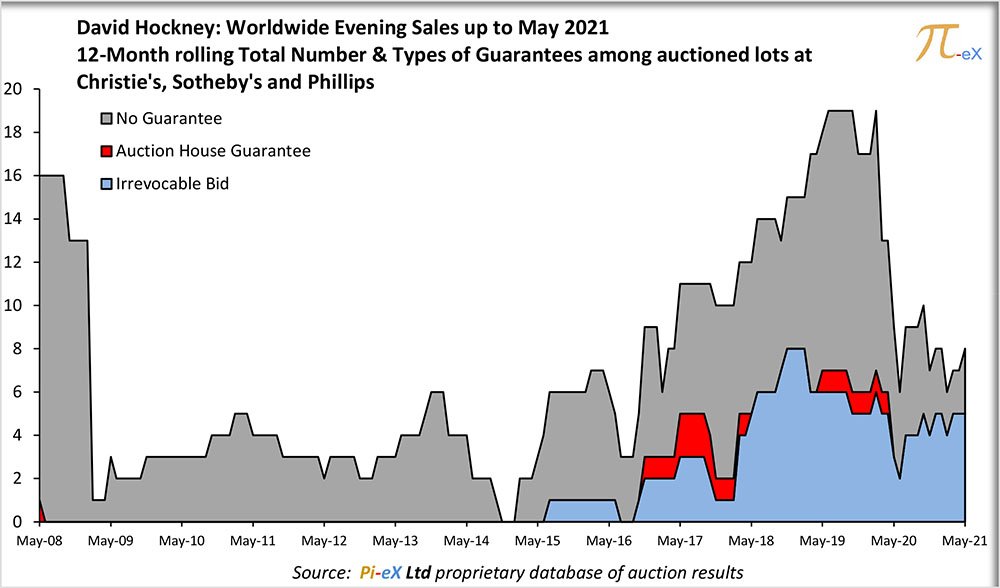 As the number of Hockney’s artworks consigned at auction decreased with the Covid19 crisis, the proportion of third party guarantees increased from 36% in May 2020 to more than 63% by the end of May 2021.  Nervous sellers avoided public auctions to sell their Hockney artworks (either going private or postponing the sale). The ones that still agreed to sell at public auctions wanted a third party guarantee, to avoid the possibility of a bought-in (or “burnt” artwork).  On May 12th, 2021, at the start of the Sotheby's Contemporary Evening auction, the auctioneer announced that Lot 117, Self Portrait on the Terrace ($8m-$12m) by David Hockney was withdrawn. Without a third party guarantee, it is most likely that consignors chose to not risk a bought-in, and withdrew the artwork from the sale.

While artworks with Third Party Guarantees always sell, most of them these days obtain little or no upside versus the price pre-agreed with the auction house ahead of the auction and often end up being bought by the third party guarantors.  As liquidity dries up and prices are artificially maintained high via the guarantee mechanism, what will come next for the David Hockney's market?

To revive his market, a healthy rebound of the high-end in 2021 should likely include a price correction- and less third party guarantees?

A multimedia, curious and prolific artist, David Hockney was already well-established in early 2008, and a top performer price-wise on the secondary market at the top 3 auction houses. His rise in value in the late 2010’s is almost a case study of the role of major touring exhibitions, with his utmost high in 2018 fuelled by marketing efforts from auction houses. But as the high end has been badly hurt in 2020, their efforts to maintain the market marker afloat might have hurt the trade. There is however no doubt that the Hockney frenzy is here to stay. The second half of 2021 will tell how high his prices will rebound - hopefully, on a healthier secondary market.

Anna Benoliel contributed to this article

Photo by Lavi Perchik on Unsplash