For years, the Impressionist & Modern Art mid market segment has been suffering from an extreme price sensitivity issue both on the side of sellers and buyers. As observed year after year for the past 14 years, buyers overall seem to be unwilling to bid above or even at the estimates offered, while sellers appear to be resistant to lower estimates and reserve prices for impressionist and modern artworks they consign at day auctions. This situation has resulted in an extremely high Bought-in rate (almost 30% in the past few years) and low performance at Impressionist & Modern Art day auctions over the past 14 years, especially when compared to results at the Contemporary Art day auctions.

The challenge for the auction houses has been to reconcile sellers and buyers’ expectations and this fall the challenge seemed even more daunting as auction houses had to compose with different waves of lockdown restrictions, the mounting uncertainty ahead of the American elections and a contracting art market - three parameters that might exacerbate price sensitivity.

Remarkably, despite the complexity of the environment - or maybe because of - the results of the New York Fall Impressionist & Modern Art day sales show that Sotheby’s was able to address the long standing issue of price sensitivity in a new way via its online format, which achieved total results of $30.54m, - including buyer’s premium, above a total Low Estimate of $24.13m. This was a much better performance than Christie’s, which reached in two live auctions a combined total of $19,928m - including buyer’s premium, under a Total Low Estimate of $24.46m. 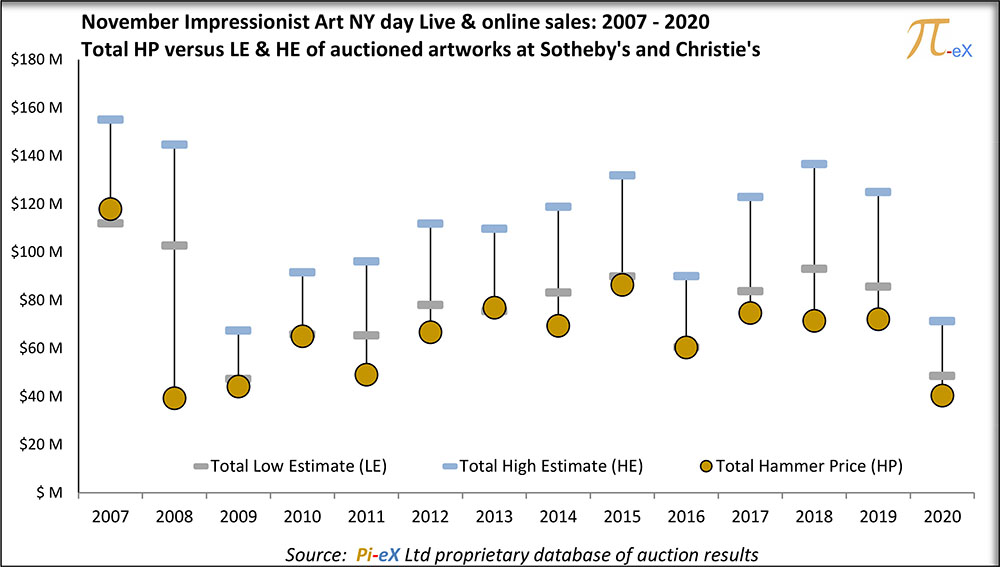 Looking back at the combined historical results at Christie’s and Sotheby’s Impressionist & Modern Art November day sales in New York shows a track record of total Hammer Prices (HP) falling systematically short or just at the total Low Estimates (LE), with no exception over the past 14 years but 2007.

This means that for most years since 2007, sellers at the New York Fall Impressionist & Modern Art day sales were not able overall to obtain the value they hoped for when consigning artworks at auctions. Hurt hard in 2008, the Impressionist & Modern Art mid market never fully recovered from the 2008 crisis, although buyers followed loosely a steady and progressive increase in prices.

It is a far cry from the bounce back of the New York Fall Contemporary Art day sales, where sellers over the past decade obtained clearly more than their initial Low Estimates, as shown on the graph below: 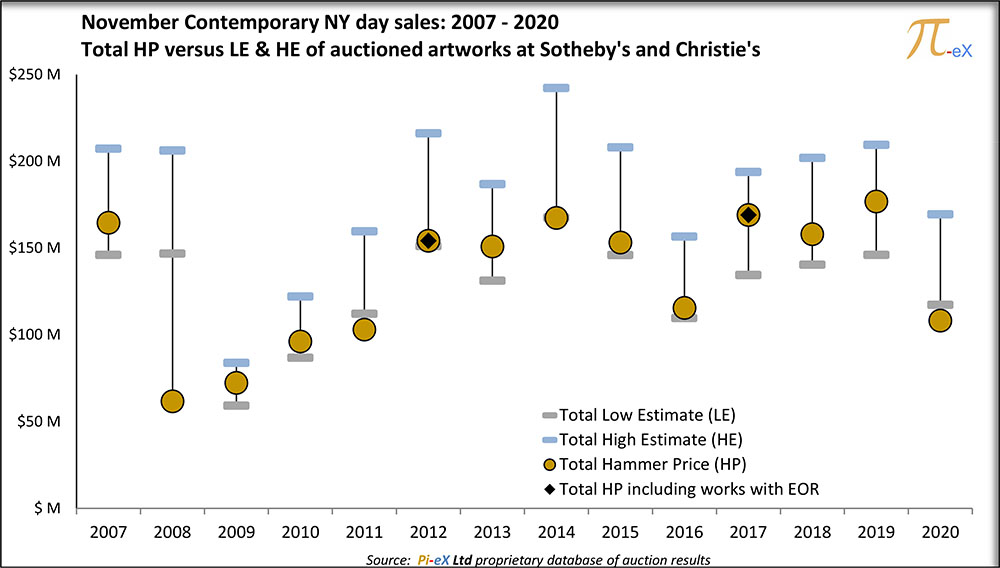 The inability for sellers and buyers in the Impressionist & Modern Art segment to meet at a particular price point and the apparent preference from sellers to hold on to their artworks rather than sell at a lower valuation in a public sale resulted in the 30% Bought-in (unsold) rate observed over the past 2 years. This is twice higher than the 15% Bought-in rate observed at the equivalent Contemporary art day sales. 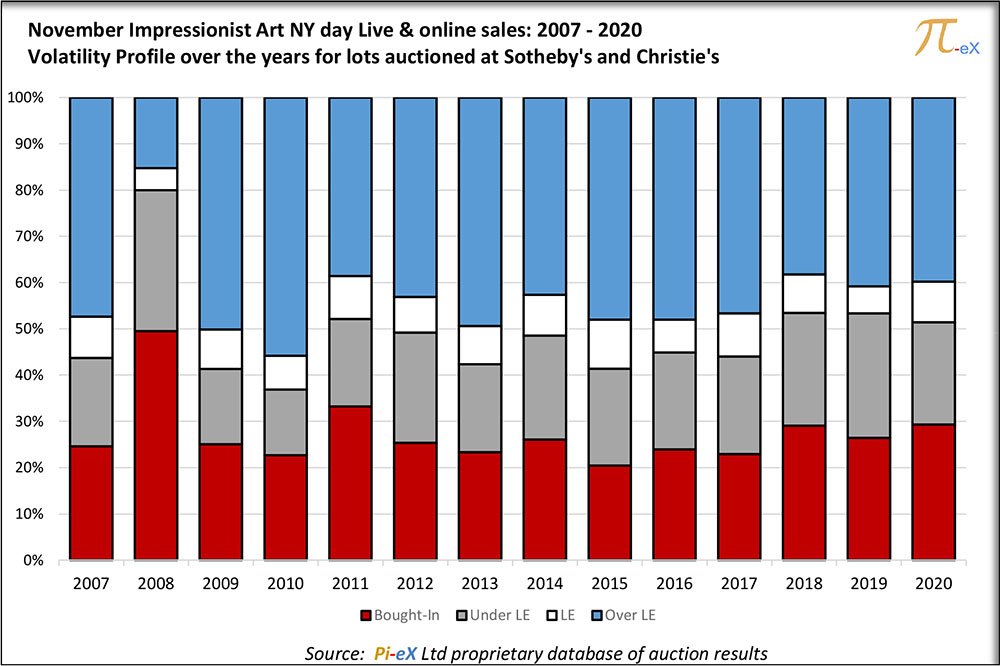 1.2 The new challenge of the coronavirus pandemic

Traditionally scheduled mid November at both Christie’s and Sotheby’s, the Impressionist & Modern Art day sales this year had to be scattered across the months of October, November and December 2020 due to the pandemic and the uncertainties surrounding the US elections.

Notably the combined number of artworks consigned by both auction houses (447 lots) was the lowest, in more than 14 years - the only comparable level was in 2009 with 455 artworks auctioned - reflecting a market environment affecting both consignments and the willingness to engage in bidding battles. 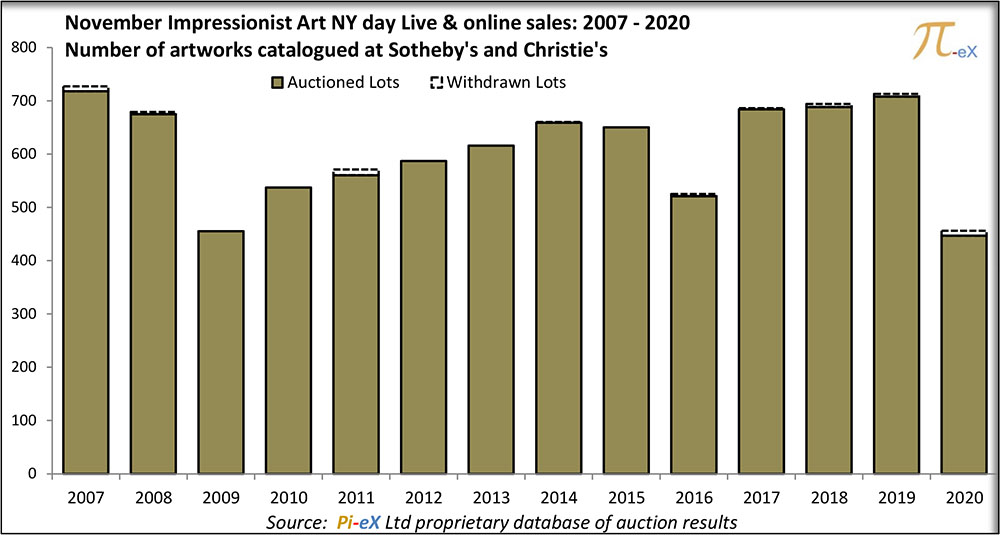 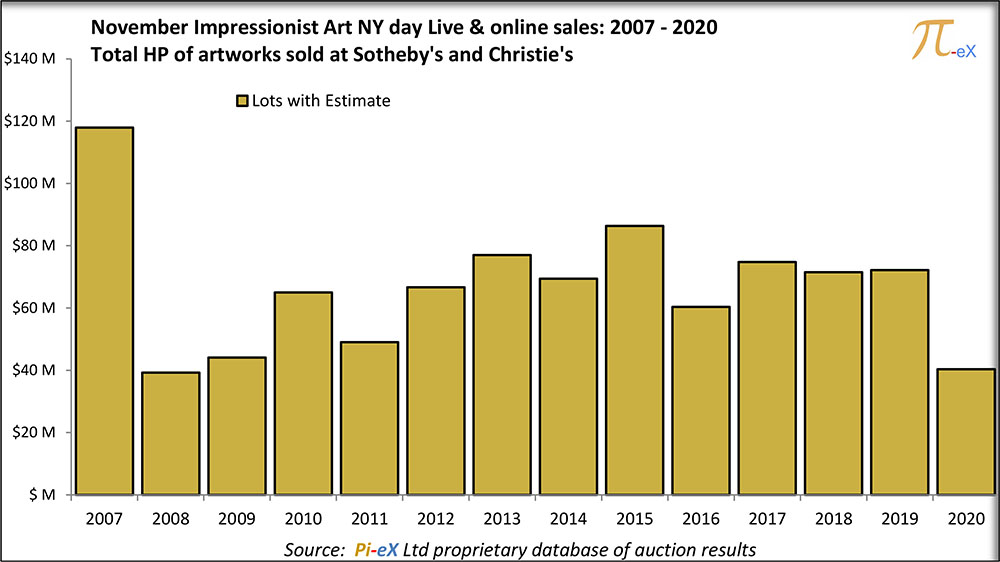 Looking at sales by auction house uncovers a disparity in performances, where the very distinct strategies at Christie’s and Sotheby’s have likely played an important role.

As shown on the graphs below, Christie’s total Hammer Price (from its two live Day sales in October and December 2020) was $15.7m, significantly below its combined total Low Estimate of $24.46m, continuing its recent underperformance (over the past 2 years). 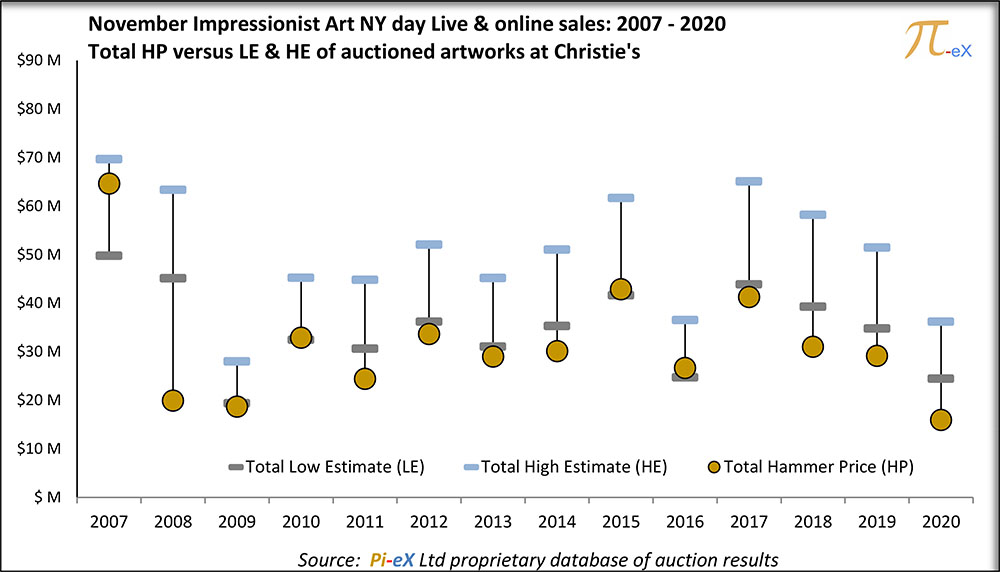 On the contrary, Sotheby’s total Hammer Price (from its online sale in November 2020) reached $24.43m, just above its initial total Low Estimate of $24.13m and a notable departure from historic performances. 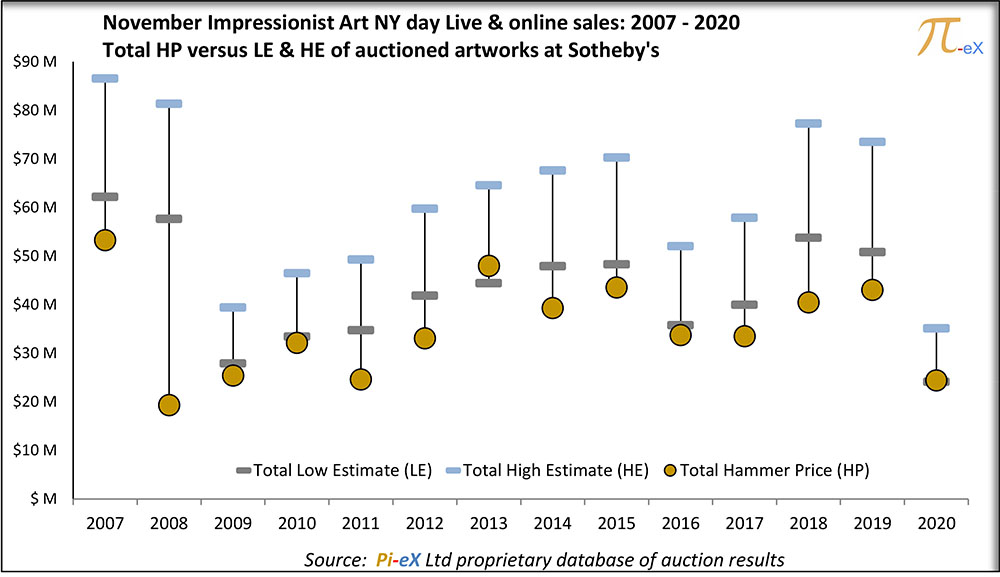 As we try to identify the potential causes of such different results, one explanation comes first to mind: Sotheby’s sale was scheduled for mid November - the regular time for New York Impressionist & Modern Art day sales - while Christie’s sales were arranged in October and December, two unusual times, which may have played a handicapping role. While the purpose of this article is not to research the role of scheduling and matching the regular historic auction calendar, we still think it is important to mention, especially since Sotheby’s was the only auction house having maintained its day sale mid November in New York, which could have given an advantage to the auction house.

However timing surely was not the only parameter behind the disparity in performances.

A closer look at the Sotheby’s online November 19th 2020 auction shows that the success of the sale was likely due to different parameters, some of which are traditional tools used by auction houses while others have been facilitated by the online format.

Among the traditional tools used by auction houses, especially at evening sales, is the resort to third party guarantors. The third party guarantee strategy is less common in day sales and a rarity in online sales, but it definitely played a role in the performance of Sotheby’s vs Christie’s in the recent fall 2020 Impressionist & Modern art day sales. In fact, 9 artworks were covered by Irrevocable Bids at Sotheby’s for a total of $3.6m: 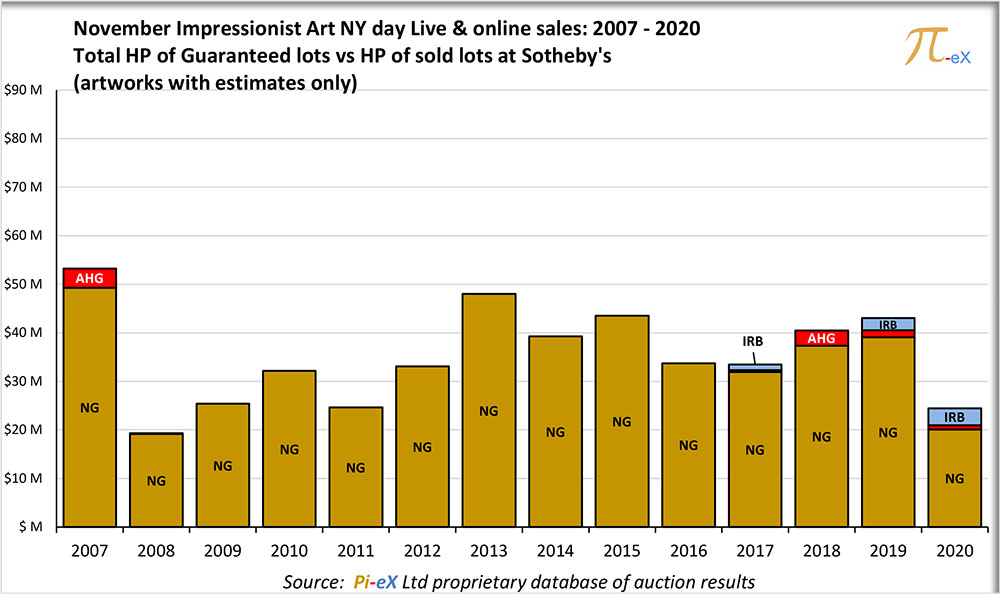 In comparison, only 3 artworks by Alfred Kubin were guaranteed by third parties at the combined Christie’s auctions and sold for a total Hammer Price of $1.05m. 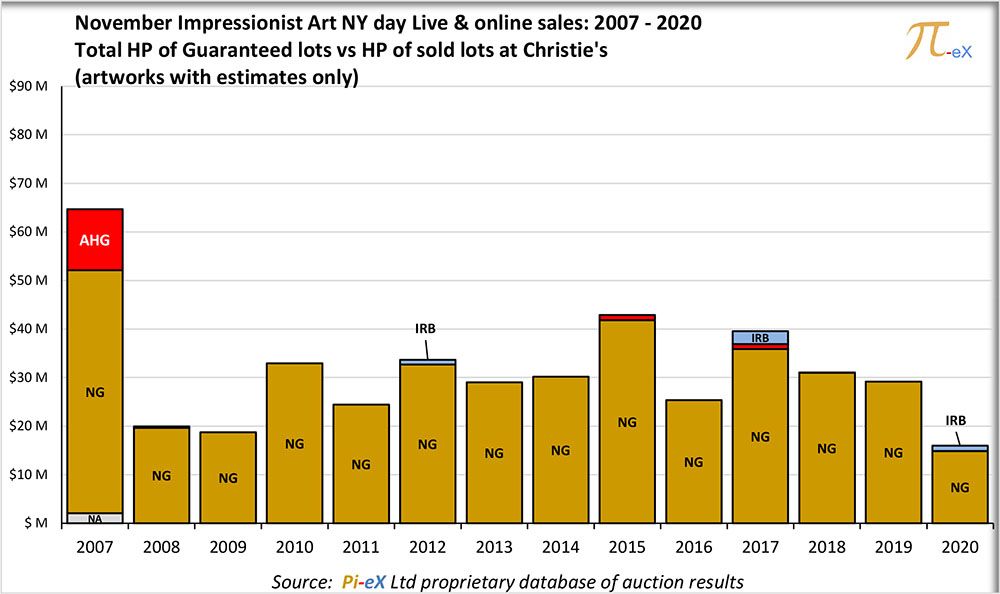 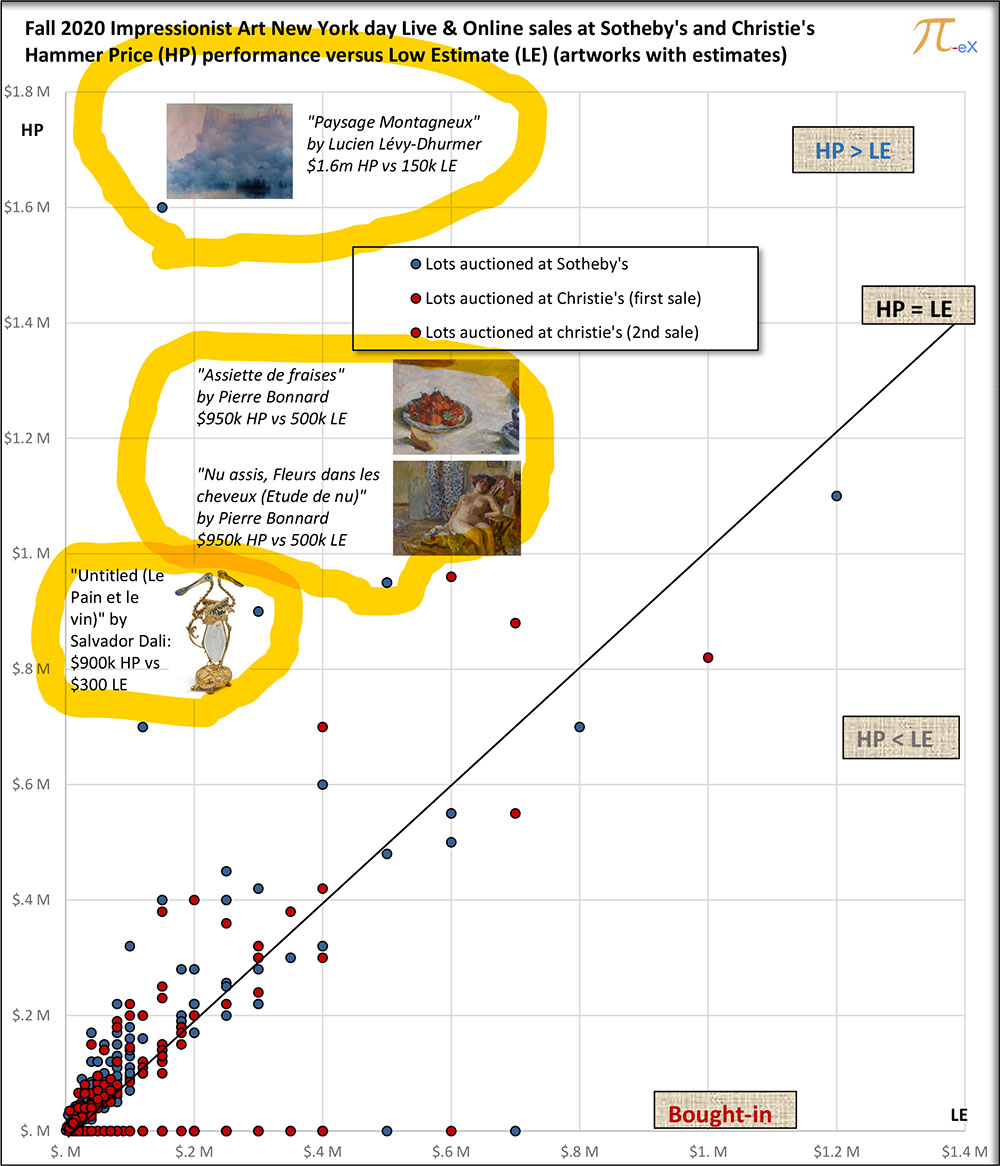 As pictured on the graph above, only 3 lots at Christie’s Day auction in December profited from the same positive volatility, which is an unusual outcome considering that online sales usually allow for less upside than live auctions.

With the online format, it is easier for auction houses to have insights into buyers’ appetite when the sale is running for a few days. This live reading of the market seems to have played a significant role in the performance of Sotheby’s online sale, as the auction house was able to offer new options to sellers after the official opening of bidding on November 10th and before the end on November 19th, 2020 to either 1) withdraw artworks or 2) lower the starting bid of some lots.

Through its daily monitoring of the sale, Pi-eX Research noticed that at least 58 lots catalogued in the Sotheby’s Impressionist & Modern Art online sale saw their “starting bid” lowered versus their initial “starting bid” on November 10th, 2020 at the start of the online auction.

Out of these 58 lots with “starting bids” adjusted, 2 lots with a combined total Low Estimate of $600K ended up as withdrawn, most likely as the long week activity and the unsuccessful adjustments sent a strong signal to the sellers that the works would end up as bought-in.

The remaining 56 lots performed as represented in the graph below: 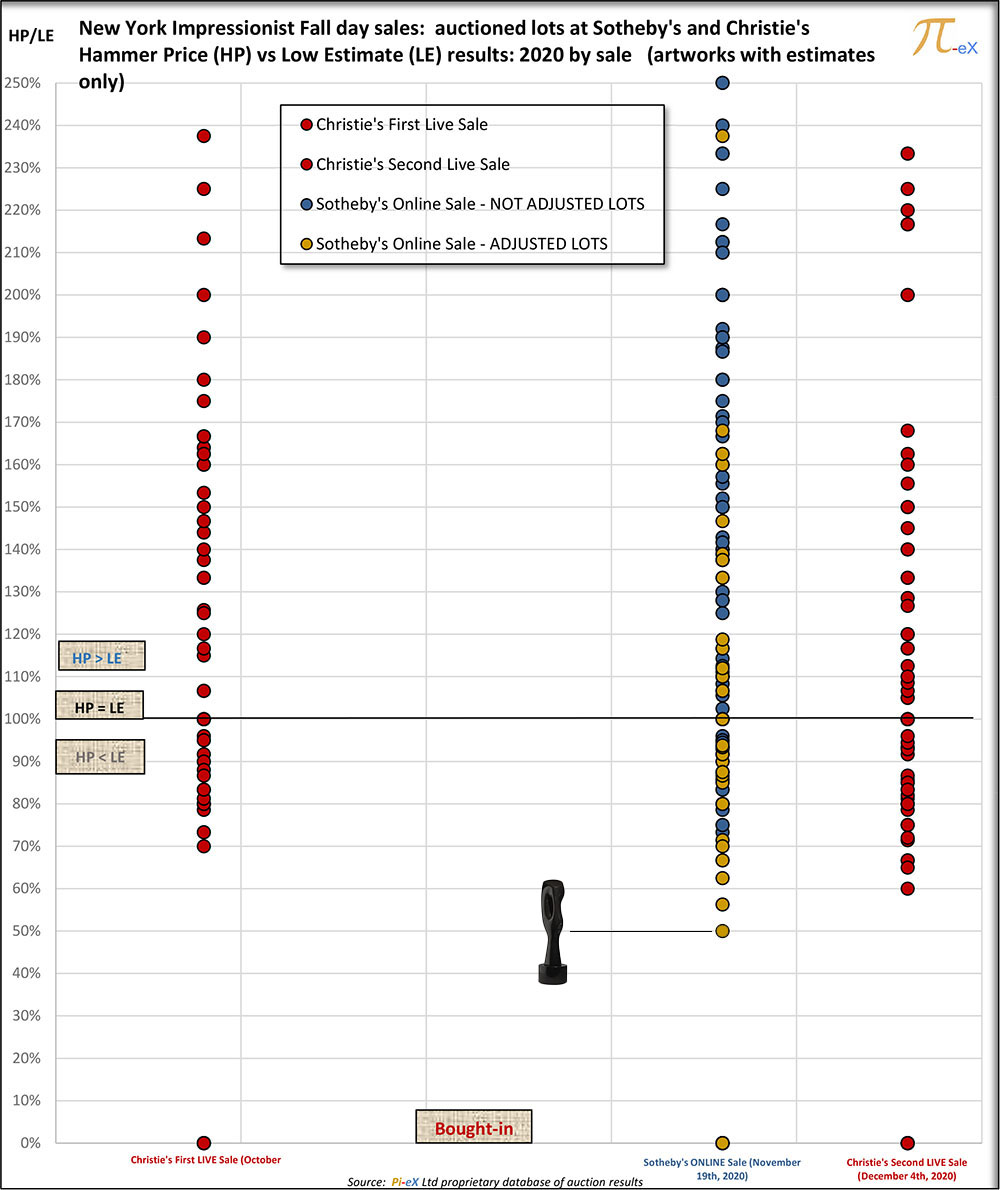 If no “starting bid” adjustments had been made, all adjusted lots - in the worst case - could have been bought-in hence leading to 42 additional bought-ins and a shortfall of $4.906m.

To this calculation, we can add the 2 withdrawn lots which would not have had the luxury to be withdrawn at the last minute in a live sale.

In the end, we can estimate that the “starting bids” adjustments allowed Sotheby’s to potentially avoid 44 bought-ins and improve its final total HP by $4.906m.

The graphs below show the worse case scenario results had Sotheby’s made no “starting bid” adjustments and the lots ended up unsold, comparing to Christie’s actual results: 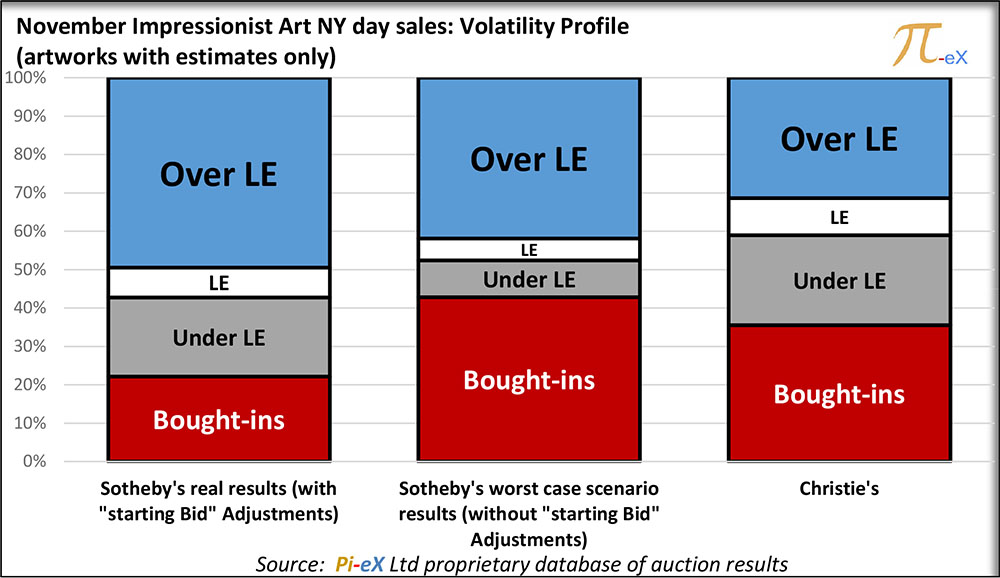 As shown in the graph below, the total Hammer Price would have been $19.52 million, obtained for a Total Low Estimate of lots auctioned of $25m : the profile of the sale would have been much similar to the one seen historically or at Christie’s this year. 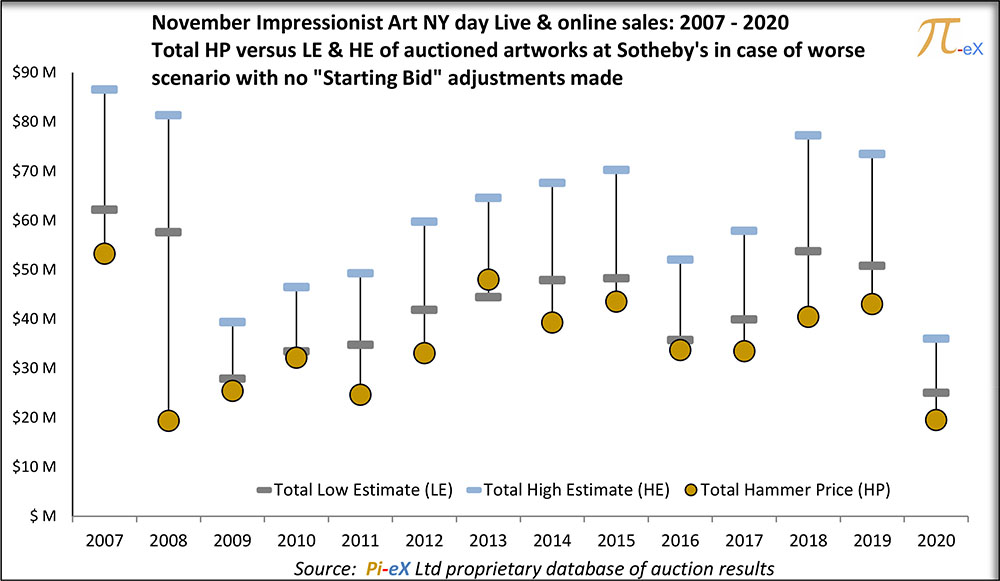 The flexibility in “starting bids” brought-in by the online format thus can explain in part the disparity with Christie’s performance.

The online format acted as a potential remedy to the price sensitivity issue. The adjustments, made possible by observations during the week-long online bidding, boosted the auction results, whether by fostering last minute bidding battles far above the rectified starting bid or enabling the sale of lots that would have likely been bought-in otherwise.

What started as an unusual fall season for the New York Impressionist & Modern Art day sales came down to a simple explanation: price sensitivity drove the results again.

The challenge to have sellers' and buyers' expectations meet this year on a market where these expectations have not been aligned since the 2008 crisis seems to have been partially solved by Sotheby’s, thanks to the flexibility of the online format.

Despite initial average estimates aligned with Christie’s, Sotheby’s was likely able to confront sellers more directly to buyers' expectations, with a very concrete overview of the high bought-in risk a few days or hours before the closing of the online sale.

It is worth highlighting that this is the first time that an online sale performs better than its live equivallent - not that Sotheby’s found a way to replicate online the magic of an auction room, but rather that it was able to correct the pricing on a market considered overvalued by buyers since 2008.

A realistic view of the market is most probably what boosted Sotheby’s auction, and is the magic that the Impressionist & Modern Art day auction market needed!

All artworks' images courtesy of Sotheby’s

Anna Benoliel contributed to this report