Last week, many called the London Impressionist evening sales at Christie's and Sotheby's disappointing.  There was very little enthusiastic clapping in the auction rooms and there was an overall feeling of disappointment after the sales. Some argued that buyers were tired after the big May New York sales and the many Spring art fairs. Was it really Springtime Fatigue? or was there something else that could explain the lack of buyers' enthusiasm?

1. The lukewarm feeling of the June London Impressionist evening sales is reflected in the performance of the average Hammer Price versus the original average Low Estimates: 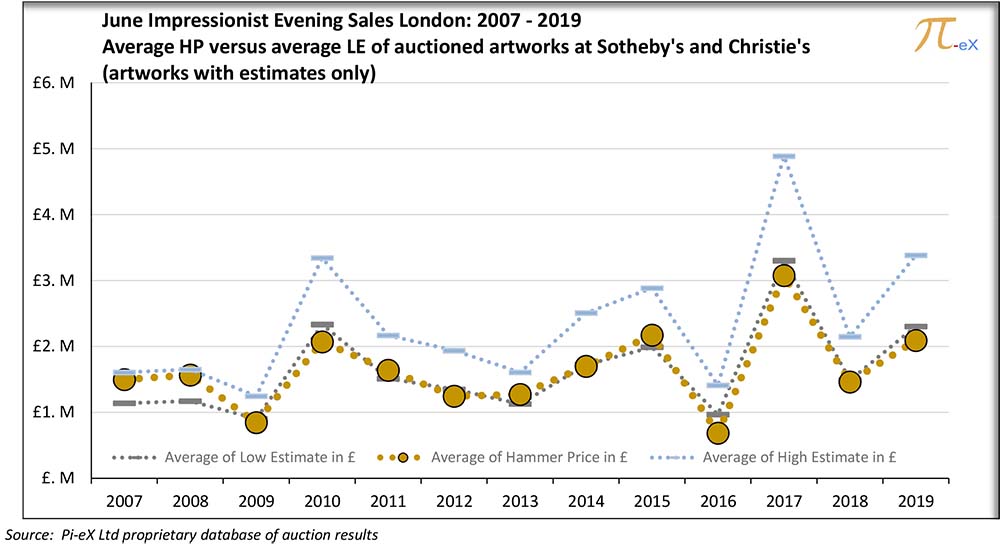 2. While there were not many unsold lots (bought-ins) at the June London Impressionist evening sales, more and more lots just performed at or below their Low estimates: 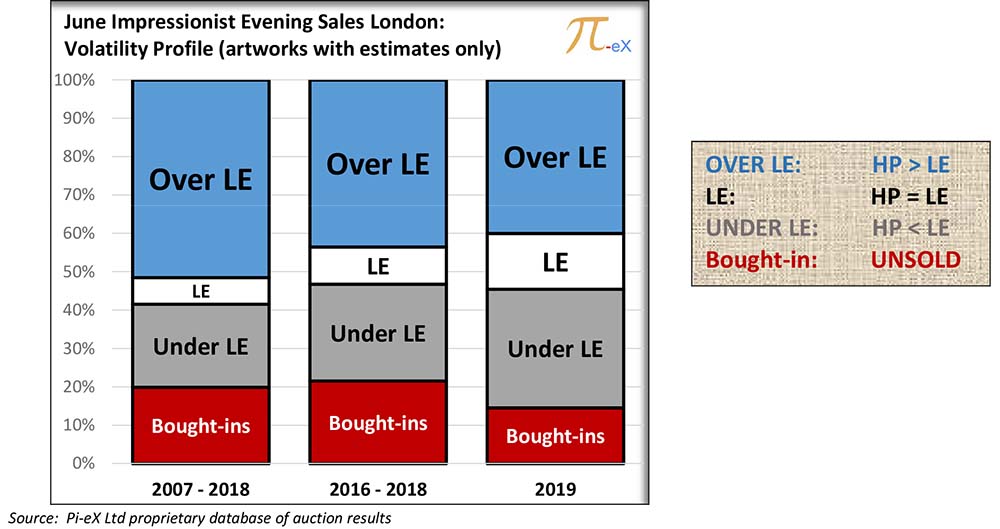 Arguably, this year, the bought-in rate (percentage of unsold artworks) was one of the smallest ever.  At the same time though, 60% of the lots performed at or below their Low Estimates, which means that the sales did not have much drama hence few clapping.  The drama and clapping in fact arise when a few buyers fight decisively and ruthlessly for a same artwork bringing its Hammer Price many times above its original Low Estimate. With only 40% of the lots achieving Hammer prices above their Low Estimates, there was not a lot of clapping at the 2019 London Impressionist evening sales.

3. Excitement seems to have disappeared from the London June Impressionist evening auctions: 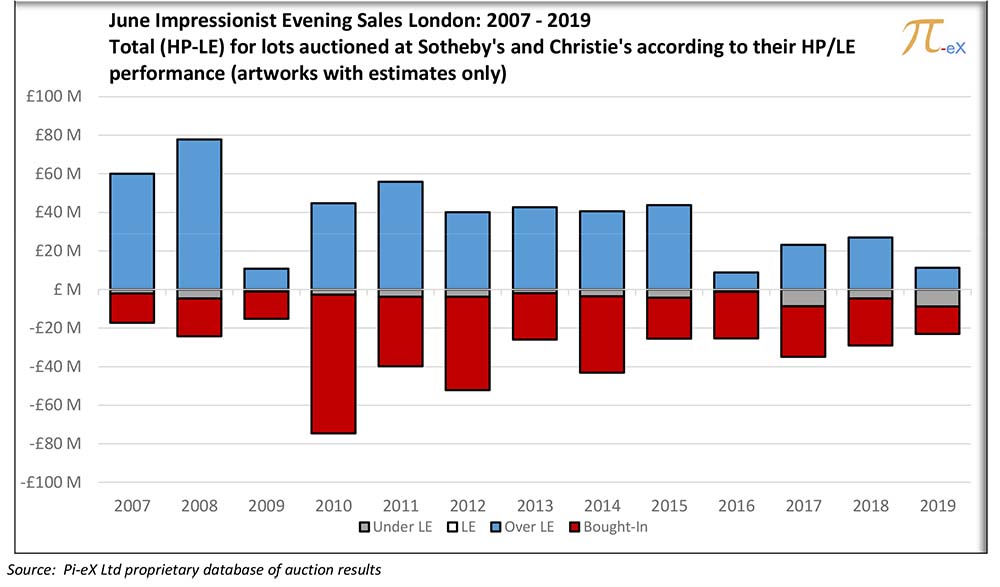 By measuring the spread between Hammer Prices and Low Estimates, the graph above gives a sense of the level of excitement or disappointment in the auction rooms.  The larger the blue bar, the more intense the bidding in the room must have been in order to create the large positive spread between Hammer Prices and Low Estimates.  At the opposite, the larger the red and grey bars, the more artworks were either hammered at prices below their Low Estimates or left unsold.  Interestingly, over the past few years, the extreme volatility both positive (in blue) and negative (in red and grey) that could be noticed in 2010, 2011 and 2012 at the June Impressionist sales has all but disappeared.  In 2019 Hammer Prices were very close to Low Estimates and few lots were left unsold. What happened? Is it just buyer's tiredness or something else? 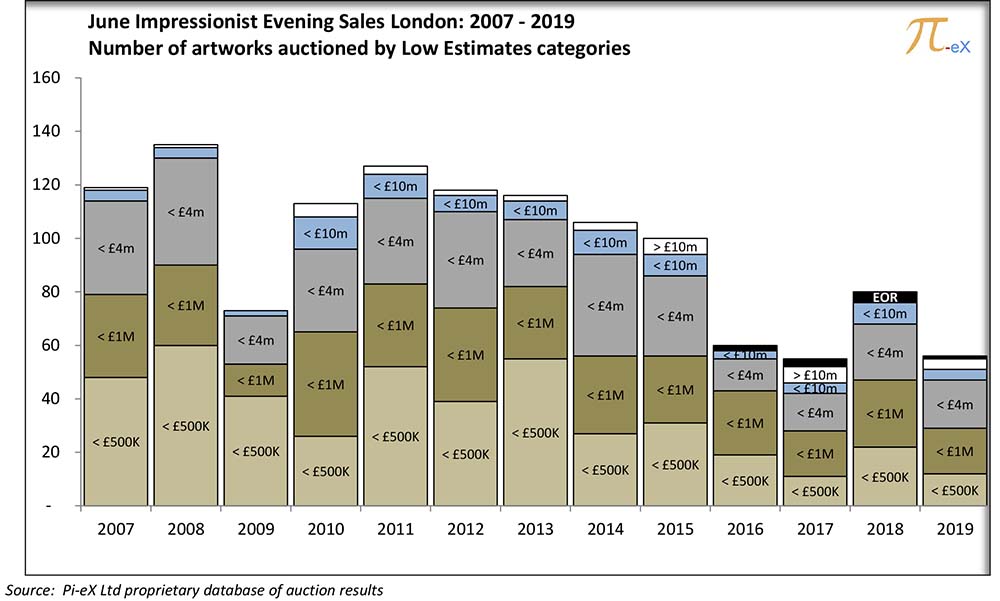 In 2019 the number of lots auctioned at the June Impressionist evening sales was less than half that of 2011 (44%). With less lots on offer, there are also proportionally less artworks in the lower Low Estimates range.  Back in 2011, lots with a Low Estimates above £1m represented only 35% of the offering.  Today they count for almost 50% in volume and 89% of the sales in value.

As the price point gets higher, there are obviously less potential buyers who can bid and therefore it is not surprising that the bidding gets thinner.  To avoid disappointment for the sellers who agree to commission their precious artworks at auction, the Auction Houses have used guarantees extensively.  This also has had consequences on the sales. 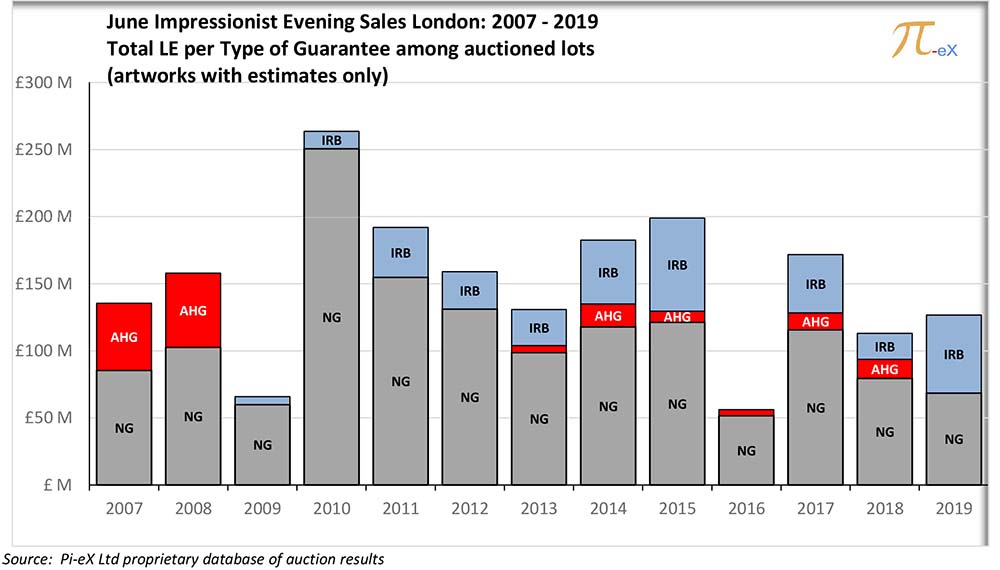 At 46%, the percentage of the Total Low Estimates of the sales covered by Third Party guarantees this year was the highest ever.  This means that ahead of the sales, the auction houses had already pre-sold 46% of the value of the sales to Third Party Guarantors who agreed to place Irrevocable Bids at pre-agreed prices.
The question then is: Was that agreed price the right price for the work?
At the auction, if the Hammer Price of the guaranteed work ends up being much higher than the Low Estimate (the usual price point at which one can assume the guarantee was at), one can assume that there was great demand for the work and the guarantee did not affect the price too much.  This may not be the case however when the Hammer Price ends up at or below the Low Estimate and the Third Party guarantor ends up going home with the artwork.   In this case, the Third Party guarantor - and everybody else - should really wonder whether the price paid for the artwork is a valid price or whether it inflates the market for no good reason.

Looking at the performance of Irrevocable Bids at the June Impressionist evening sales over the past few years, there may be a fair amount of guarantors who should ask themselves this question especially if they provided a Third Party guarantee over the past 3 years: 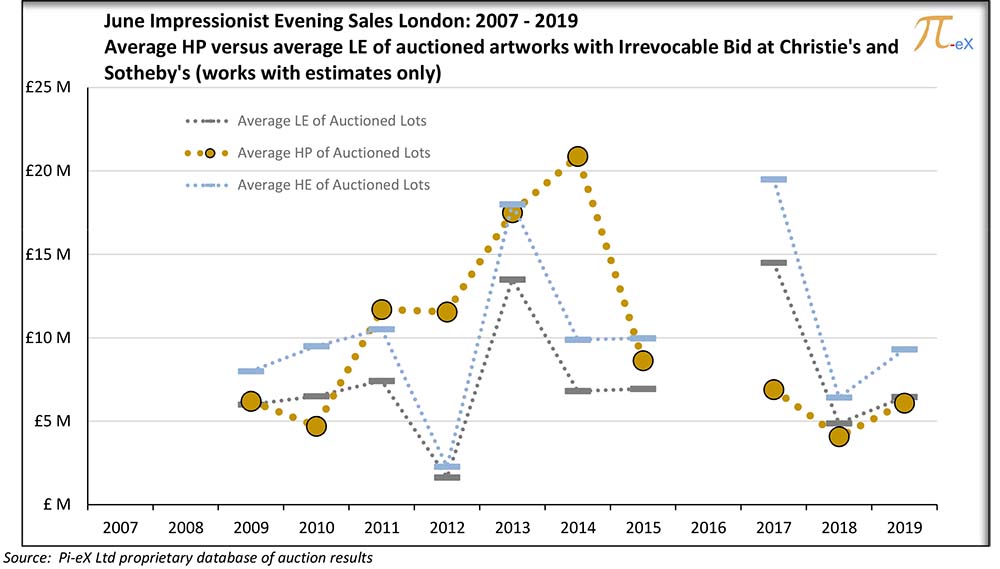 With less and less lots offered at auction, with higher and higher price points and more and more irrevocable bids, should it be a surprise that there is less and less excitement in the auction rooms at the June Impressionist evening sales?  Maybe it is true that buyers are tired at the beginning of the summer, but maybe they are also tired of ever increasing price points driven by a shrinking offering and an increasing pool of artworks for which price points are fixed ahead of the sales.  Maybe it is time for the auction houses to adjust their business model and bring back the true spirit of auctions where the mood get accelerated as artworks sell for huge Hammer Prices above their Low Estimates or dramatically fail to sell.  Volatility is an important part of auctions and displaced efforts to crush it may well results in the end of the auctions as we know it.