Despite a lower level of guarantees in value versus the past two years (based on the total Low Estimates of artworks guaranteed), Christie’s was able to achieve a 90% sell-through rate at the Impressionist evening sales on Monday night thanks to adjusted sellers’ expectations and lower reserve prices. This allowed some buyers to acquire art at rather reasonable prices!

Ahead of the Christie’s New York November Impressionist and Modern evening sale on November 11th 2019, it was clear that some sellers had decided to pass on the opportunity to sell their art this fall in New York as both the number of lots catalogued and the total Low Estimates of the lots to be auctioned were drastically lower than last year. 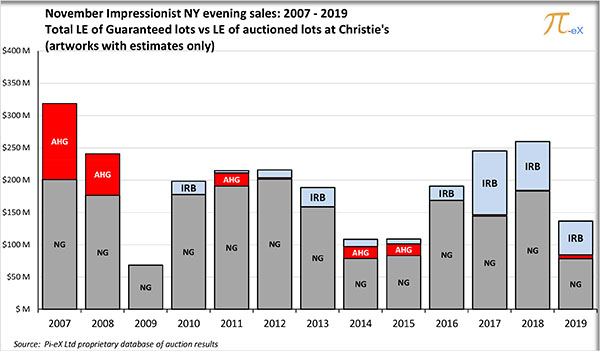 Cause or consequence, guarantees themselves covered a smaller value of Low Estimate. Interestingly they represented a higher share of the total auction estimate given the fact that few collectors were willing to sell their art with no guarantee.

In this difficult contest, it was good news that Christie’s was able to achieve a 90% sell-through rate, meaning that only 10% of the artworks auctioned were left without a buyer. 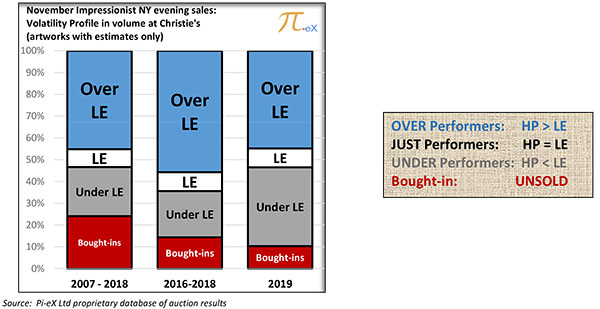 With little appetite in the room for aggressive bidding this resulted in most of the artworks selling for a Hammer Price (HP) equal to the Low Estimates (LE) or Under the LE as shown in the graph above.

Joan Miro’s "La Publicatat et le vase de fleurs” was hence purchased for a Hammer Price of $1,2m with estimates of $2m-$3m, which seems to indicate that the reserve was set rather low at 60% or even less of the Low Estimate. 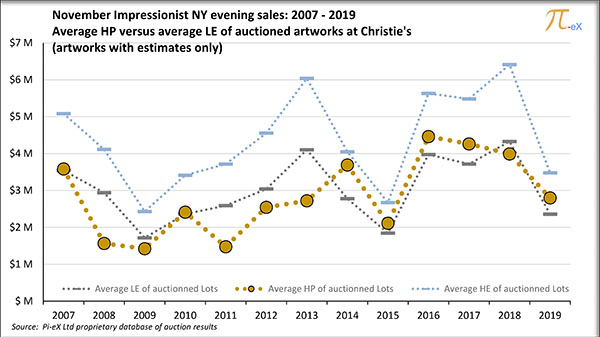 Low reserve prices combined with the fact that estimates were on average much lower this year than in the past few years, made for an interesting purchasing opportunity, which did not escape some collectors.

It definitely was a good time to buy at this year’s Christie’s Impressionist & Modern November evening sales!

You can find further information on this particular sale in Pi-eX report on Christie's 2019 New York November Impressionist evening sales from 2007-2019.