Auctions of Prints and Multiples in London over the year’s first trimester have traditionally included a series of repeating sales at Phillips, Christie’s and Sotheby’s, scattered from January to April. Over the past 14 years, the number of lots traded at these auctions has decreased almost 38%, reflecting the overall auction market conditions. Value, however, has not followed the same pattern. Very volatile from 2007 to 2014, revenue from these sales has increased from just above £10 million in 2015 to more than £14 million in 2021 (+40%).

1. Liquidity options for sellers of Prints & Multiples in London seem to be correlated to the state of the overall auction market:

Over the past 15 years, the auction market has experienced various ups and downs.  As shown by the Pi-eX Auction Market Index (Pi-eX AMI), the market peaked in early 2008, then again in 2014 and 2015.  Conversely, the auction market reached its lowest point in 2009 and 2016.   Since 2018, the market has slowly decreased before plummeting in the Spring of 2020 and zigzaging since then in the era of the Covid19 pandemic. 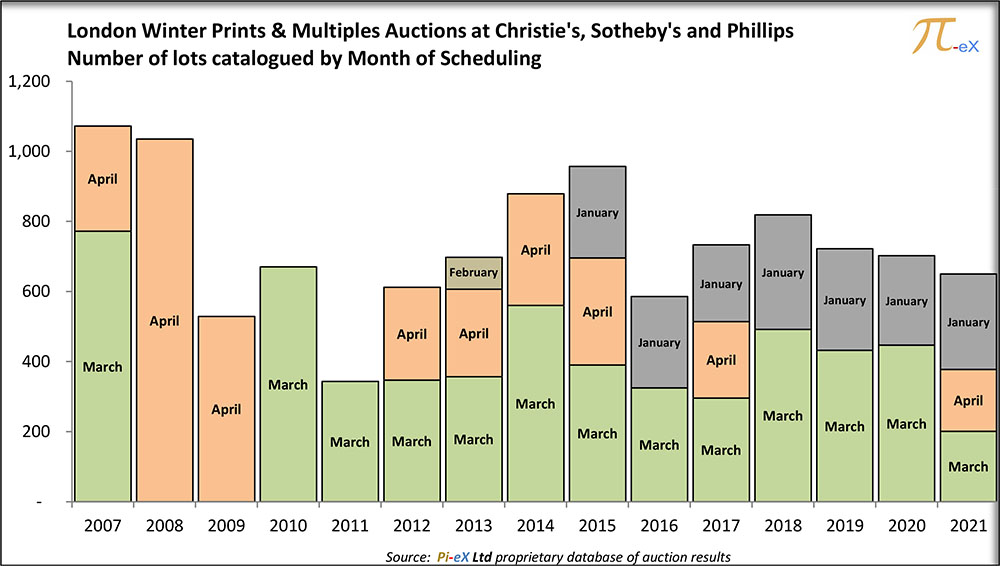 When analysing the volume of lots catalogued at the London winter auctions on a year by year basis, one can see the impact of the state of the market, highlighted by the Pi-eX AMI, on the liquidity level in the London Prints & Multiples sales.

Back in 2007 and 2008, the volume of Prints and Multiples traded in London at repeating sales in the first part of the year was above 1,000.

Following the financial crisis, this volume dropped sharply, reaching bottom in 2011 with only 343 lots traded at the Winter London auctions across both Sotheby’s and Christie's (Phillips had not yet entered the market) . As the art market recovered, it then increased slowly until reaching a new peak in 2015, almost back to the level of trade before the financial crisis, with 957 lots accross the three auction houses.

The crisis of 2016 affected again the volume traded, but as seen in other segments at auctions, the Prints & Multiples market started to rebound until 2018. Since then, however, the number of Prints and Multiples traded has slowly but surely decreased with only 650 lots catalogued in London across Phillips, Sotheby’s and Christie’s auctions in 2021.

Looking at the number of Prints & Multiples catalogued by auction house at the London winter sales provides some additional interesting information.   While Sotheby's since 2009 and Phillips since 2015 have maintained a relatively stable number of lots catalogued at their London Winter sales, Christie's seem to have fluctuated its offering over the past 14 years according to the successive waves of ups and downs in the auction market. 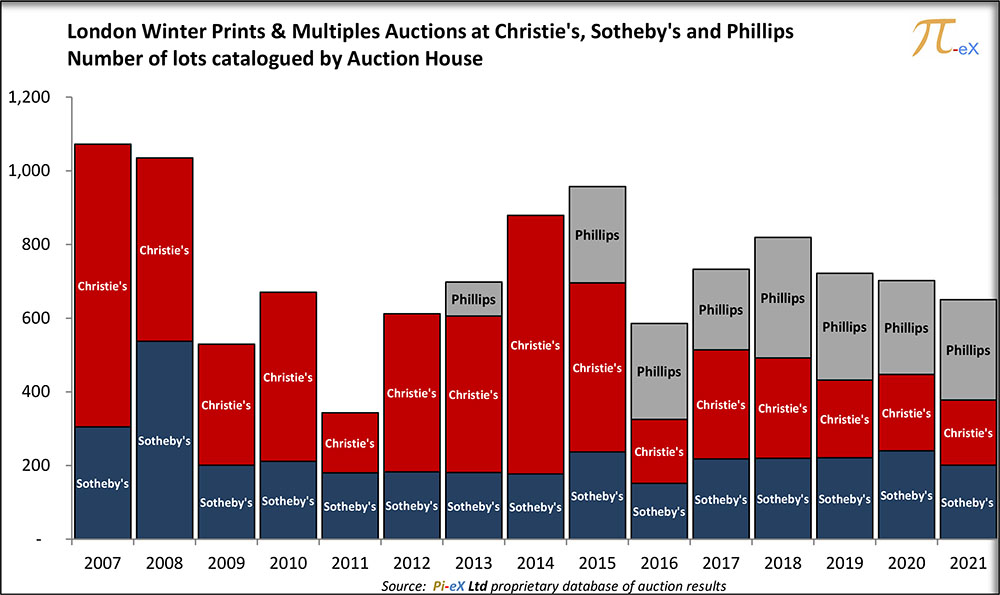 Christie’s adaptation to market conditions enabled the auction house to maintain a low bought-in rate in bad years, while still generating significant revenue with higher volume when the market was healthier. However, it has ended up affecting the trade of Print & Multiples in London in the long run, as, after 14 years of adjustment, sellers are left with fewer liquidity options.

In 2021, collectors have fewer opportunities to have their Prints & Multiples catalogued at the top three auction houses, but as volume decreased, revenue increased 40% in recent year.  Is it good news for those who are able to make it to the bidding rooms?

2. If it were not for top lots and outliers, the London Prints & Multiple market would be flat at best:

After years of volatility, total auction sales of Prints & Multiples at the London winter Sotheby's, Christie's and Phillips' auctions have increased from £10 million in 2007 to more than £14 million in 2021. 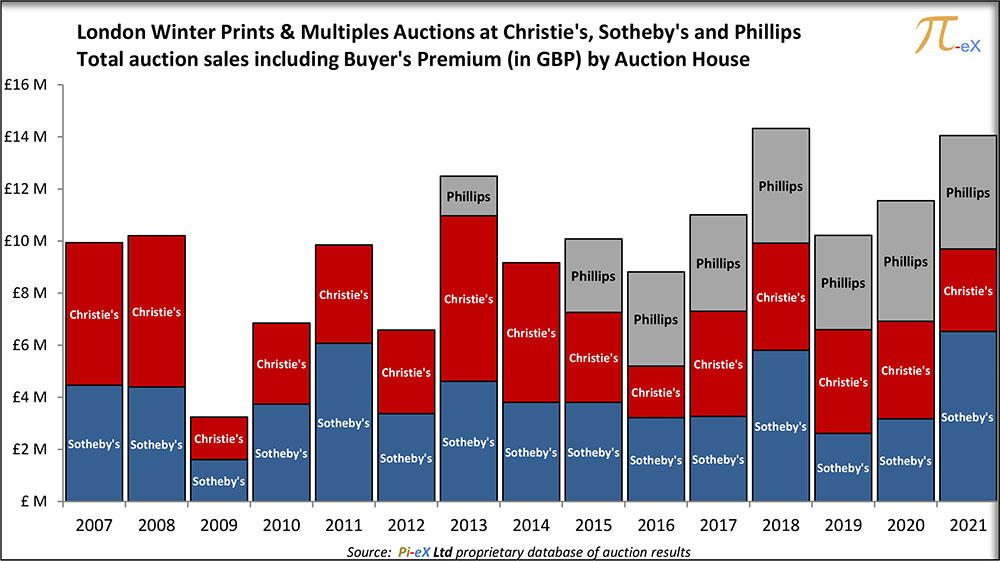 Top lots have played a key role in the overall growth of the segment over the past seven years. As shown in the graph above, the increase in revenue in 2018 and 2021 was mostly driven by an impressive jump in revenue at Sotheby’s Prints & Multiples sales:

In both years, the explanation is the same. A top lot with an unusual selling price boosted the total results: 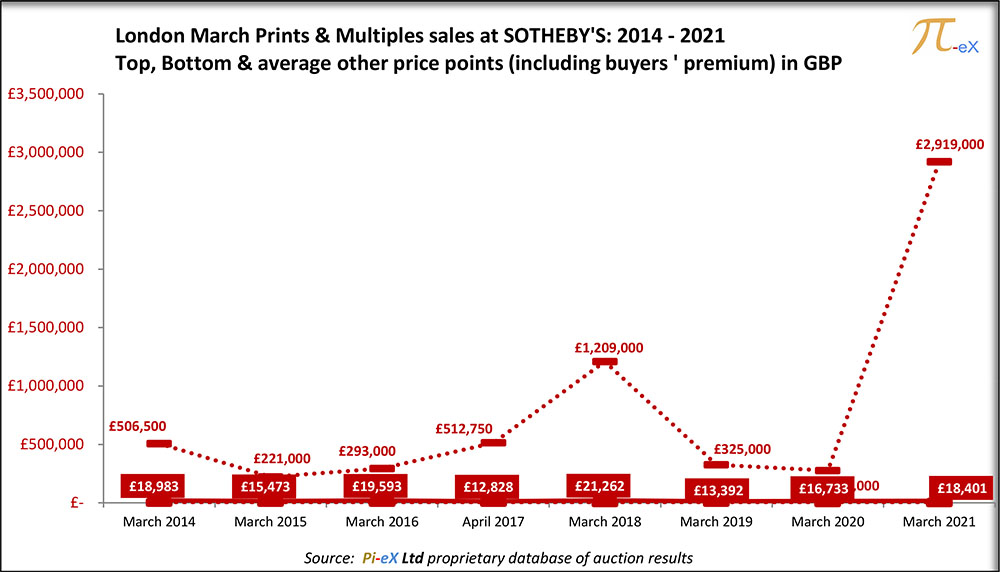 The graph below shows a comparison of the average price (including Buyer’s Premium) with (in red) and without (in black) the top and bottom selling lot at the Sotheby’s Prints & Multiples auctions in London from March 2014 to March 2021. 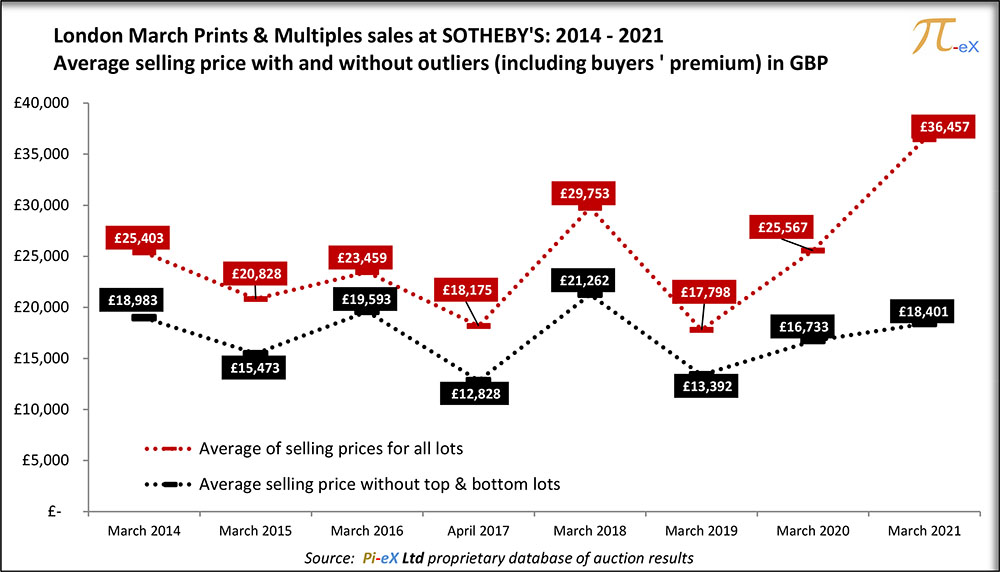 Without these two outliers, the trend overtime in the average price of sold lots would look much flatter even downward at around £16,000. The difference between the two averages in 2021 in particular shows that the performance and high price obtained for Endangered Species (F. & S. II.293-302) by Andy Warhol was truly an outlier and clearly not reflected in the rest of the auction. 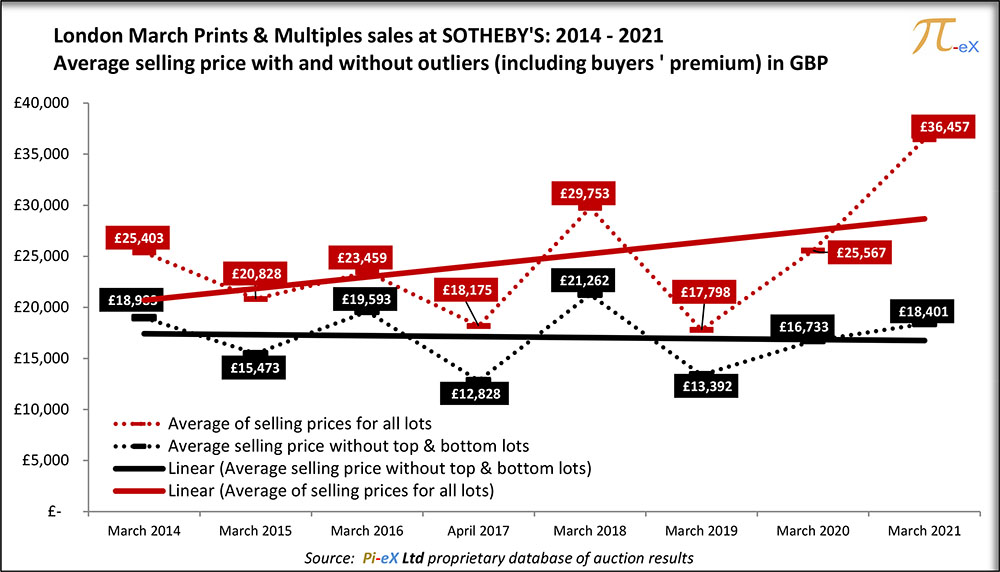 The picture is very similar at Christie's London Prints & Multiples sales. Once the influence of the top outliers is removed, the average price per print sold has remained stable since March 2015 at around £15,000. 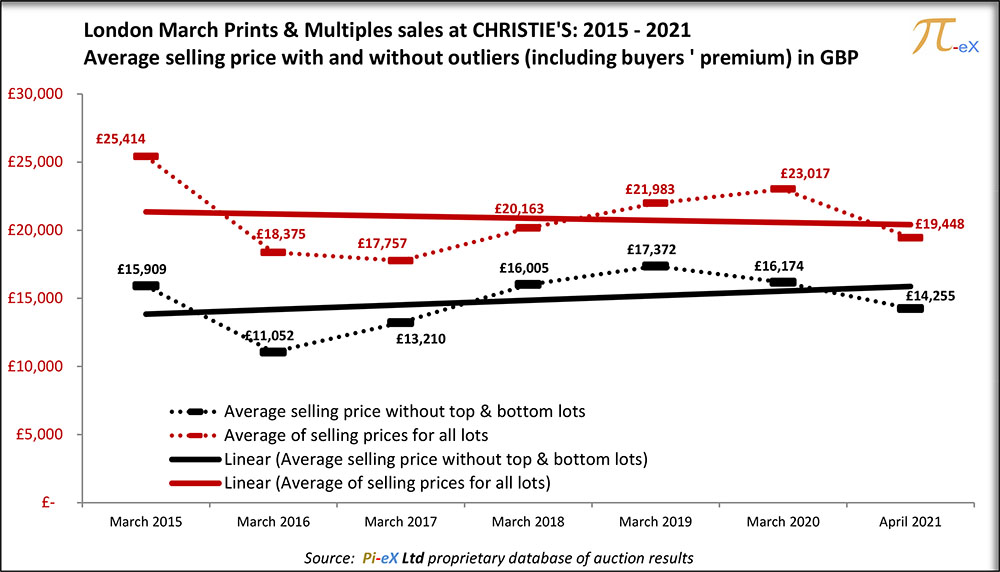 Finally Phillips, the latecomer to the party (since Phillips only entered the London Prints & Multiple market in 2015 after an unsuccessful attempt in 2013), splits its first trimester sales between an Evening auction entitled "Evening Editions" and a day auction, entitled "Day Editions".

Interestingly Phillips "Evening Editions", through a series of upturns, followed by downturns shows the same stable trend since 2015, with an average price (without outliers) at around £35,000 overall. 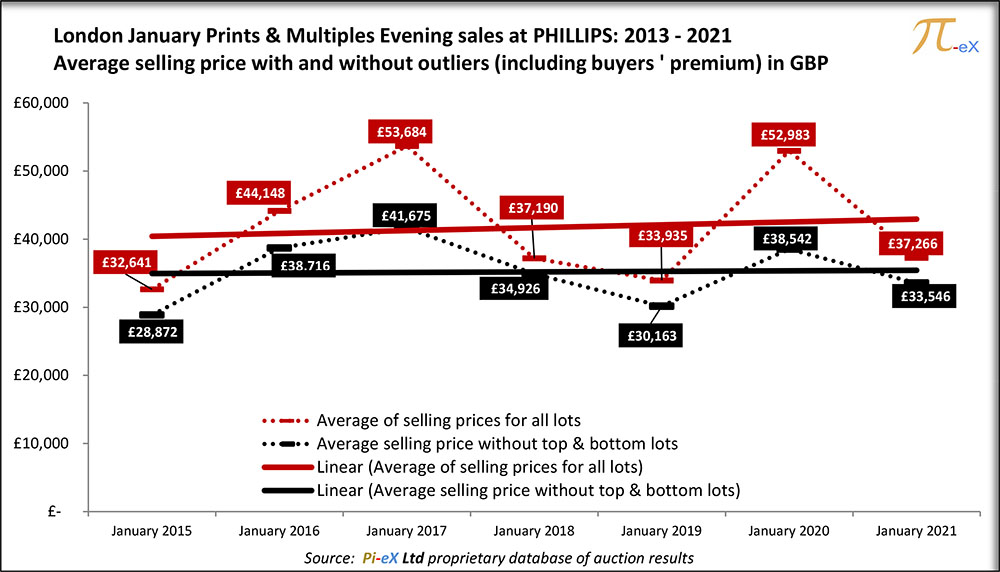 The only exception to the flat trend comes from Phillips "Day Editions" auctions, were a small but sustained growth rate for the average price of lots sold over the past 7 years can be observed.  This means that buyers who would have bought a limited edition at the Phillips "Day Editions" auction in January 2015 could have reasonably expected to be able on average to sell it for a higher price on January 2021. 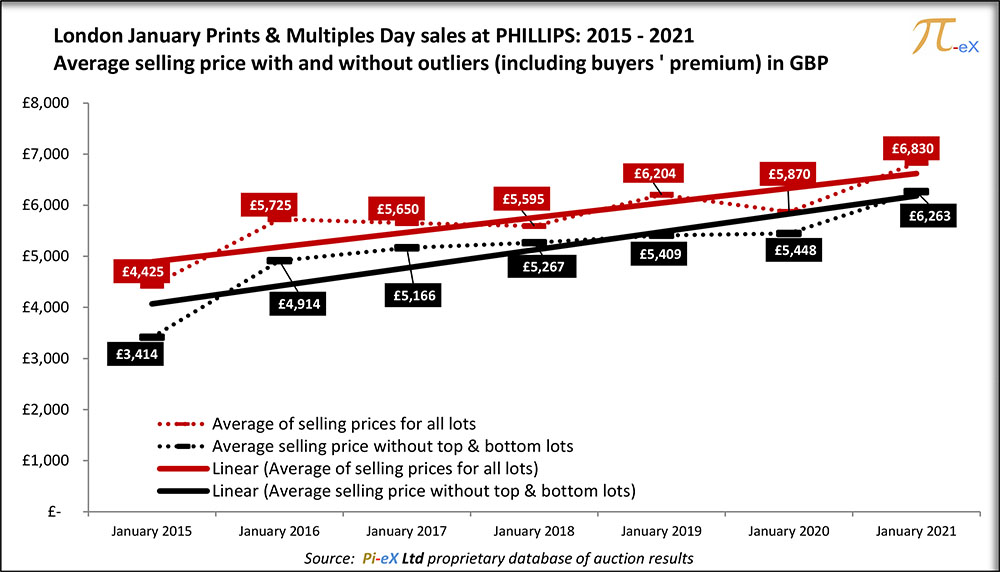 In the art market, "less" is often more.  This however does not seem to be the case at the London limited editions auctions, where the average price of sold lots has remained flat despite years of decreasing volume.

What may be is that Prints & Multiples follow a (too) literal definition of a "store of value": their price does not fluctuate, but you might store them for long. The best strategy therefore while buying at London Prints & Multiples winter auctions could be effortless: make sure to buy art that you love and enjoy!

Anna Benoliel contributed to this article.